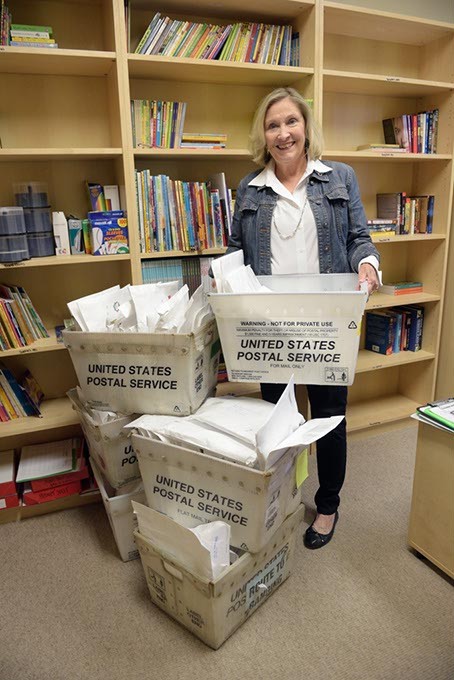 A young mom sits, holding a children’s book in her lap. After the camera clicks on, she smiles brightly and waves at it. She holds up the book, opens it with one hand and animatedly reads it aloud as she uses her other hand to point to each word as she follows each sentence. Her voice reflects jovial silliness as she impersonates the story characters.

Soon, the story ends. The young mom wishes her toddler girl a Merry Christmas. Mom’s voice cracks as she assures her little one that she’s healthy and safe and, hopefully, will come home to be with her in the spring. She waves again as she ends the video with “I love you.”

Each year, thousands of Oklahoma children miss the comfort and embrace of a parent who is incarcerated. Since 2011, Oklahoma Messages Project has helped incarcerated mothers and fathers send love and support to more than 6,000 children by recording and sending DVDs much like the one the young mom created for her toddler daughter. Each care package also includes a copy of the book the child’s parent read to them.

The impetus of the Oklahoma Messages Project traces back to Edmond resident Cheri Fuller, a former teacher and accomplished writer on subjects like parenting and family. Troubled by the fact that incarcerated fathers and mothers do not experience many of the joys of parenthood, Fuller designed a parenting skills course that she taught through the Oklahoma Department of Corrections.

During a lesson on how to write special letters to children, many of Fuller’s students said they rarely or never see their children. While she searched for a way to rebuild families impacted like these, one of Fuller’s adult daughters heard an NPR report about a Virginia-based Messages Project. Created by a news producer-turned state inmate after a marijuana-related drug conviction, the woman, Carolyn LeCroy, launched The Messages Project in 1999. After serving her sentence, she returned to recording video messages with mothers, which were later mailed to children and families as Christmas gifts.

Fuller reached out to the Virginia organization. LeCroy traveled to Oklahoma to train volunteers and joined them as they visited a Sooner State prison.

Throughout the year, Oklahoma Messages Project, which operates independently from The Messages Project, visits various state prisons with boxes of books and a few Sony camcorders. This year, the organization is on track to reach more than 2,800 children with Mother’s Day, Father’s Day and Christmas DVD messages, Fuller said.

Caregiver and children’s calls and emails flood Oklahoma Messages Project after it ships out holiday packages. Some children rewatch the videos nightly. When she’s sick or has a bad day, Fuller said, one girl watches her DVD on repeat to feel closer to her mom.

“We’ve heard some of the children watch the videos, pausing so they have a still image of their mom or dad,” Fuller said. “They fall asleep looking at that screen.”

“When we are there, they are not inmates,” said Camden Chitwood, a volunteer and the organization’s board president. “No one is viewed as a felon. … They are just mom or dad.”

Nobody is referred to by their DOC, or Department of Corrections, inmate number.

This year alone, Chitwood has entered Oklahoma’s prison system nearly a dozen times as a project videographer. She does more than run the camera — she offers kind nods and smiles to the emotional, and often nervous, parents in front of her. Chitwood knows about the impact incarceration has on children, parents and families. Often, they experience a unique combination of trauma and shame, often compounded by social stigma.

What Chitwood has witnessed during her prison visits is nothing short of a miracle. For instance, one father admitted he didn’t know how to read. Volunteers worked with him. His DVD was a message to his first-grade son, without him reading a book.

“He told his son in that video that he too was going to learn how to read,” Chitwood said. “[Months later,] that same dad was ready to read a book. He stumbled over some of the words, but when he did, he looked at the camera to say, ‘It’s okay. Daddy’s nervous and learning to read too.’”

Some studies seem to show that children with a mom or dad or both parents in prison are six times more likely than their peers to end up behind bars. Similarly, Alliance for Excellent Education research finds an indirect correlation between education and arrest and incarceration rates.

An Oklahoma Messages Project study by University of Oklahoma researchers shows 72 percent of children who received messages from their parents showed improvements in reading ability and 59 percent showed significant increases in school interest.

“This is about breaking that cycle of incarceration,” Chitwood said.

Incarcerated moms and dads don’t disappear when they’re behind bars, especially for the kids they leave behind. A parent is always a parent, said Francie Ekwerekwu, whose father was incarcerated during most her childhood and early adulthood.

Visiting her father could be frightening. Ekwerekwu remembers a distinctive smell and entering the prison with groups of other people, including children, to visit their loved ones. Sometimes, after long waits, she would see her father. Guards watched closely as visitors and inmates shared quality family time. Hearing her father’s voice over a video message would have been a cherished gift, Ekwerekwu said.

Now, as a volunteer board member, she sees inmates picking out books and creating videos. She has also interacted with some of the children on the receiving end. She said it’s a priceless gift for all involved.

“You can’t repay that generosity,” Ekwerekwu said. “What Cheri, the volunteers and the donors are providing is a gift that is unrepayable. The people who receive the gift are so appreciative.”

As a group of mothers enters a large conference room-turned-temporary-base for Oklahoma Messages Project, one mom walks directly to a table filled with popular children’s books. She quickly found author Robert Munsch’s Love You Forever picture book. Its cover depicts a cartoon child attempting to drop a watch into a toilet.

As she holds the book, the mother of two says she remembered the heartwarming tale from her childhood. Her grandmother read it to her. Fuller tells the woman this is exactly what this program is designed to do: capture mothers reading bedtime stories to their children, and during this season, include Christmas greetings.

“Remember it’s your kids on the other side of the camera,” Fuller said. “This is just you and your kids. Your kids need to be filled with mommy love.”