Ezra Gentle grew up in southern Africa as the son of missionary parents. But it was his time in the Oklahoma panhandle as a young adult, behind the lens of a camera, that caused him to find God.

“I had sort of lost my faith in a sense before I started making this film,” said Gentle, referring to Lone Man’s Land, a documentary he produced and co-directed that premiered last week at deadCENTER Film Festival. “I was doubting if God existed. I had no significant proof.” 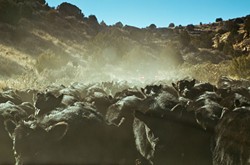 While following the Apple family for his film in 2014, Gentle saw a faith in his subjects that changed his outlook on religion.

Even so, at its core, Lone Man’s Land is not a religious film.

Gentle, a graduate of the University of Oklahoma, documents a ranching family in Kenton, the state’s farthest western town.

The Apples battle with the state to keep their land, which has been in their family for generations. The fight to keep their lease for the government-owned land is one challenge Gentle documents as the family also learns their 4-year-old son has cancer, another relative dies and one of history’s worst snowstorms hits the town.

“After all that, they thank God and they know it’s going to be okay and they trust in him,” Gentle said.

An article by Sheilah Bright in This Land Press sparked Gentle’s interest in filming in Kenton.

Gentle made short videos in high school and college and had a short documentary shown at deadCENTER in 2013. The documentary, Gypsy Cafe, explored the growth of Red Dirt music. But Lone Man’s Land is his most ambitious project to date, and while he is happy to have completed the film, he realizes the journey is not over.

“Very recently, I realized that making a movie is two parts,” Gentle said. “You have to make the product and then you have to get an audience, and getting the audience is the hard part. This process, for me, is exciting ... but in my mind, the battle is not over; there’s an incredibly long road ahead.”

As Gentle works to distribute his documentary, he also will be moving to Los Angeles to continue his filmmaking career.

“Their perseverance and their faith throughout all that happened is what drew me to them,” Gentle said about the Apple family in his documentary.

Now, it’s Gentle who is putting his faith in his young career and hoping to persevere after celebrating Lone Man’s Land’s festival premiere.