Before Jennifer Woods became a jeweler, she was a child in rural Oklahoma, picking rocks and chicken eggs up off the ground.

As the current Skirvin Hilton Oklahoma City artist-in-residence, she is taking inspiration from the state’s natural features to create handmade jewelry collections based on the 10 geophysical land regions in Oklahoma.

“I’m using beads with colors and textures that match the landscape,” Woods said, “but that also coincides with the commodities produced in the region — whether it’s fruits or crops, even animals grazing, things like that. … I usually have a couple of main focus colors and then some accent colors. I try to make sure that all the pieces will go together in one collection so you could mix and match earrings or a necklace and it all will still be a part of the same region.” 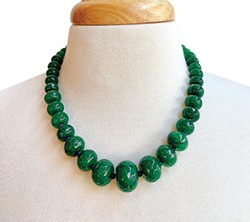 Skirvin Paseo Artist Creativity Exposition (SPACE) selects one Paseo Arts Association member each year to work in the Skirvin’s studio space. Woods, who began her residency at the beginning of October, has already finished a collection inspired by northeastern Oklahoma’s Ozark Plateau region and a collection inspired by the Gypsum Hills region to the west. Each collection contains 20 pieces. Seeing the empty studio space motivated Woods to get started immediately, she said, because she knew people would be stopping by and she wanted to give them something to look at.

“I allocated roughly a month, maybe longer, per collection, but I’ve been working really rapidly,” Woods said. “I had to fill up a whole space with jewelry, and I didn’t have any when I first started, so I think that was my motivation. I just put my head down and went.”

Her next collection will focus on the Red Bed Plains region, which contains Oklahoma City and Kingfisher, her childhood hometown, where she first became interested in the natural landscape.

“I grew up in a small town, and I played outside all the time,” Woods said. “My dad’s a farmer, and I was always at my grandma’s, outside in her garden, picking eggs from the chickens. I was just always surrounded by farmland and animals and nature. … I would pick up rocks and leaves and sticks and things like that, and my grandmother would take me on vacation to Arkansas and all throughout Oklahoma. We would always go visit art galleries, but also jewelry stores and touristy things. I would always pick up rocks and those little gemstones that you can get in the store, and I collected jewelry with her. … She had a little one-room cabin in Arkansas, and we would stay out there. It was just so pretty and peaceful.”

Her love of nature led to studying biology in college, but she never stopped wanting to make jewelry.

“I wanted to learn metalsmithing, but there really aren’t that many classes, so I taught myself how to string beads, basically because I just wanted to do something creative,” Woods said. “I had always wanted to learn how to make jewelry. I just thought that I would have a chance to do it at some point, but during college, I just got so focused on my studies.”

As a biology student, Woods studied the nine biomes of Oklahoma and remembered them when she began working on a proposal for the Skirvin artist-in-residency program as a potential connecting theme she could use to combine her scientific background with her current artistic interests. Eventually, she chose instead to focus on the state’s geophysical land regions, which allowed her to draw inspiration for colors and materials from the landscape as well as the flora and fauna.

“Beads are rocks,” Woods said, “so it seemed to work better. … Each region should look distinct from one another, but within that region, those pieces should go together. Some of them will look different depending on if I’m focusing on the hardscape with the rocks and things, or even some of the vegetation versus the crops, but I do like to mix them together.”

Working with beads is in many ways a continuation of her childhood fascinations.

“I love to hold onto the beads; it’s like when I was a kid and picking up the rocks.”
—Jennifer Woods tweet this

“I love it because I’ve always been a collector of rocks, gemstones and things,” Woods said, “polished gemstones when we would go on vacation, or rocks from the ground even. I still have rock collections that I gathered when I was in first grade. So it really works for me because that’s always the part of it that I just loved. I love to hold onto the beads; it’s like when I was a kid and picking up the rocks. I love that part. Eventually, maybe I’ll learn metalsmithing, too, but I just really enjoy working with the beads.”

But the scientific method does continue to play a role in her creative work.

“My brain does think in steps and processes and planning things out ahead of time,” Woods said. “I think it’s systematic or methodical. It took me awhile to figure out my process. … Just like science, there’s a lot of trial and error. You try something, it doesn’t work; you try something else. I think that I’ve developed a process and a method that works for me, but just like science, I think I’m always looking for a new way or a different way or a way that might work better.”

The collections Woods is creating for the artist-in-residency program give her a chance to combine her varied interests and expertise while allowing her to try a new approach to her art.

“Most of my stuff has been one-of-a-kind,” Woods said. “It is inspired by nature, but forming a cohesive collection that goes together, that part is completely different.”

The project also gives her an opportunity to explore and study her home state in a different context.

“I’ve learned so much about each of the regions, what makes up the region and what the region looks like,” Woods said. “There’s a learning and educational aspect to it, which I can pass down to the people that buy the pieces and the people that come in to look at the pieces. We talk about my inspiration in the land. That part is fascinating and very different from what I’m used to. … My pieces aren’t typically based on Oklahoma, but I’ve lived here all my life, so I do feel like that has to factor into it somehow. … I’ve based some things on my environment around me and the nature that I see, but this is the first time that I really infused Oklahoma into the work.”

Woods’ jewelry can be viewed at The Skirvin Hilton Oklahoma City, 1 Park Ave., or at Jennifer Woods Jewelry, 3010 Paseo St.