Laughs from diverse comedies balance with the anguish of one of history’s greatest tragedies during Oklahoma Shakespeare in the Park’s (OSP) 33rd season, which begins in June.

The play centers on young bachelor Petruchio and his off-the-rails courtship of Katherina (sometimes shortened to Kate), an unruly young woman who does not fit society’s cookie-cutter definition of “wife” or “lady.” Modern productions can sometimes be controversial among those who believe the attitudes of the time the play was written were sexist or misogynistic.

“The one thing that people always comment on for that play is, ‘How can you do that show? It degrades females,’” said Kathryn McGill, OSP executive and artistic director. “I have a wonderful female director who’s going to make sure it’s not a misogynistic rant against women.”

McGill said Woosely’s vision for the production is to portray Petruchio (actor Sean Eckart) and Kate’s (Jodi Nestander) courtship as mutual growth. It is about both of their journeys to greater understanding, not the wearing down or taming of one woman.

The back-and-forth between the two leads in The Taming of the Shrew can be compared to a similar dynamic between the leads in last year’s OSP opener Much Ado About Nothing, McGill said, but on a wilder, more extravagant scale.

“Kate and Petruchio, they’re equally matched,” McGill said. “They’re renegades and aren’t bound by society’s rules, or at least they don’t want to be.” 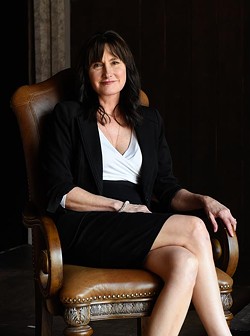 In July, Or gets its Oklahoma debut as the second production in OSP’s four-show season. The play by contemporary writer Liz Duffy Adams will be directed by Laura Standley and presented at OSP’s Paseo Arts District home-base theater, 2920 Paseo St.

Virginia Woolf’s cherished essay A Room of One’s Own hails 17th-century playwright Aphra Behn as the person women should thank for giving them “the right to speak their minds.” Hilarious Or tells the story of Behn, a former spy, pressed to finish the play that would make her the world’s first professional female playwright while facing an array of romantic and political distractions.

McGill said she has often considered producing one of Behn’s own plays with OSP. Though that has yet to occur, she was happy when she first read Or, written in 2010. The play is like a classic farce, featuring three actors who portray multiple roles and undergo many costume changes.

Or is the type of production that epitomizes OSP’s mission of not only showcasing classic works from Shakespeare and elsewhere in theater, but of producing shows that feature a strong use of language.

The 1930 English comedy depicts a divorced couple that goes on to meet new spouses. By coincidence — or perhaps fate — the two new couples run into each other during their respective honeymoons in the south of France. Immediately, sparks of romance are rekindled between the former lovers.

McGill said those familiar with Coward’s work are aware that he’s known for his high British wit. Private Lives is sometimes called one of theater’s greatest comedies. The sharp banter between characters is one reason it stands out.

“It’s a very simple play in many ways, and it’s really all about the language and these really interesting, funny, quirky British characters,” McGill said. “It’s one of those plays where when you read it, you laugh out loud.”

Countless revivals and retellings of one of Shakespeare’s most well-known works have popped up across the history of stage, film and literature. Hamlet, a young prince of Denmark, is sent into a maddening tizzy as he plots his revenge against those who murdered his kingly father.

Considered one of Shakespeare’s greatest plays, McGill said it has been about eight years since OSP last presented a production of it. She said one of the reasons the tragedy has been retold throughout history is because so many people can identify with Hamlet’s inner turmoil.

“Everyone relates to him in some way,” she said. “We’re all Hamlet; we all have to question whether or not what we do is right and the morals of what we do.”

Print headline: Drama uncaged, The Taming of the Shrew presents a wild start to Oklahoma Shakespeare in the Park’s 2017 season.

The Taming of the Shrew