Oklahoma State Fair is back with new attractions 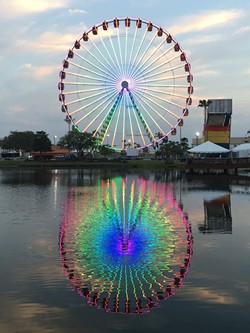 The orange, green and yellow Ferris wheel serves as more than just a marketing tool for this year’s Oklahoma State Fair.

On paper, it accompanies the 2017 theme “Bigger, Better, Best.” Physically, it serves as one of the new marquee attractions.

Sky Eye Wheel, a 155-foot structure, is marketed as the largest traveling Ferris wheel in North America. Using at least 10 trucks as transport, the 400,000-pound monstrosity equipped with 36 gondolas, debuts at the fair Sept. 14-24.

Sky Eye Wheel, coupled with the opening of Bennett Event Center and the addition of attractions like The JFK Exhibition, highlights new opportunities for fairgoers.

“The fair business needs to stay relevant to the current trends. If not, people will choose to spend their money elsewhere,” said Scott Munz, longtime vice president of marketing and public relations at Oklahoma State Fair. “We don’t want to completely upset the apple cart and throw everything out and start from a completely blank canvas … but we also want to provide them with new stuff that catches their interest, and hopefully they can create some new memories and new traditions. It’s a fine balance between old and new.”

Fair planning takes years. The majority of time leading up to September’s opening is spent on 2017, but a team of staff members are working on 2018, 2019 and beyond.

“It isn’t just we wait until Aug. 1 and stick a plug in the wall and it blows up and there’s a fair,” Munz joked.

Considering how far out plans are made, 2017 is a year organizers circled for quite some time.

Why? It centers on the new Bennett Event Center, a massive, 279,000 square-foot expo building that cost more than $50 million to construct using funds from the MAPS 3 project.

“It’s very fair to say that crown jewel addition to the property is probably not only the biggest change, but it’s the most pivotal change that has allowed everything else to fall into place,” said Gina Burchfiel, vice president of Oklahoma State Fair. “It’s the capstone that turned everything.”

The space gave the fair freedom to change layouts, add vendors and bring in new exhibits and attractions.

For example, the state fair, via a partnership with the Oklahoma Department of Agriculture, Food and Forestry, constructed a permanent store of retail space for companies with the Made in Oklahoma program. In years past, organizers housed the store, which features everything from jams, jellies and spices to furniture, in a 300 square-foot space inside Oklahoma Expo Hall. It has since moved to a 3,600 square-foot space in Bennett Event Center.

“It ties everything into a nice, big package,” Burchfiel said.

In addition, the auto show is utilizing 70,000 square feet in the event center. It spent the past two years outdoors after the Travel & Transportation Building came down to make way for new construction.

The moving pieces freed up space for The JFK Exhibition, a 15,000 square-foot traveling library exhibition of sorts, in The Pavilion.

“If you think that by leaving things in their space they’ve been in for a very long time makes it the same old, same old fair, then for sure we’ve blown that out of the water this year because almost nothing is in its same old space,” Burchfiel said.

For those not interested in agriculture or cars, the fair beefed up its entertainment this year, ranging from a live shark encounter to performing pets.

Burchfiel said lemon sharks and nurse sharks, ranging from six to eight feet, are included in the encounter. While Panfilov’s Performing Pets, featuring five Jack Russell terriers and several cats, is more for entertainment value, the shark encounter serves a dual purpose to introduce the often-feared creatures to fairgoers.

“In what would typically be billed as an entertainment show, it’s really our purpose and mission to work with people,” Burchfiel said. “You gotta be entertaining or you’re not going to have someone stay around. We know that, but we really enjoy bringing groups that have some sort of educational message.”

Fairs are known for food, and organizers are tapping into that element with the Vintage American Glamping Cooking Show. Glamping, dubbed as a glamorous camping experience, took off in the 20th century with the popularity of aluminum trailers. Burchfiel said the show brings a vintage 1950s feel with the inclusion of an Airstream trailer.

On the fairgrounds, more than 100 food locations will serve up quirky offerings. There are more options this year thanks to Bennett Event Center.

“Fair food is very much ‘What have you done for me lately?’ and the vendors answer that call very well,” Burchfiel said.

Other main entertainment draws include 10 new Disney On Ice shows running Sept. 14-19 with a Follow Your Heart theme, a compilation show featuring Dory, characters from Frozen, Buzz and Woody from Toy Story, Cinderella, Ariel and Rapunzel.