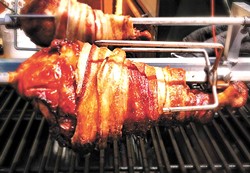 The Oklahoma State Fair is fast approaching, which means it’s time for Oklahomans everywhere to ready their bellies for another year of ridiculous food.

Even as restaurants embrace comically rich dishes and food trucks sell out of bacon-wrapped, cheese-filled, deep-fried bites of whatever, there is still something special about going to the fair and buying a meal so ludicrous that it elicits gawks and giggles from passersby.

The fair runs a glorious 10 days, Sept. 17-27, in Oklahoma City, and each of them can be experienced with a new, completely bonkers edible from its seemingly endless roster of food vendors.

We start with bacon, because cured pork belly is the go-to signifier of fair fare.

San Diego-based The Bacon Habit returns for its fifth year with a menu that is heavily influenced by swine.

“Everybody loves bacon,” said Amber Vandewarker, who owns the truck with her husband Nathan. “We truly think it’s the meat candy.”

New to this year’s event is bacon-wrapped corn on the cob ($7), which is — you guessed it — local sweet corn wrapped in delicious cured pork strips. The summer staple is cooked in a wood-fired smoker then tossed on a grill until the bacon achieves perfect crispiness.

When she first came to the Oklahoma State Fair, the California math teacher offered chocolate-covered bacon, which is still a big seller.

In fact, it was so popular that she and her husband decided to bring the rest of The Bacon Habit trailer with them. Each year, they can be found slinging pork-centric dishes like the Caveman Turkey Leg (a giant turkey leg wrapped in bacon), beer-battered bacon and bacon cheesy bombs (pepper jack cheese covered in biscuit dough, wrapped in bacon and deep-fried).

Not to be left behind, Porky’s plans to serve a pair of nontraditional burgers for bacon lovers. The waffle burger is an epic breakfast meal that stacks a burger, a fried egg, bacon, cheese and syrup between crispy waffles. Somewhere, the McGriddle quakes in its wrapper.

All of that is downright sane compared to its other Baconstein monster. The bacon-cloaked donut burger might be the most death-defyingly delicious combo of heart-clogging delights ever eaten.

Bacon gets all the glory, but the fair food alpha will always be the corn dog.

Brown’s Concessions combined its classic corn dog and its cheese on a stick to create the cheese corn dog. It’s a corn dog covered in cheese, dipped in batter and deep-fried.

OKC-based Chef Ray’s Street Eats is also a new addition, offering its signature chicken and waffle. Owner Ray Wilson said everything is made from scratch and was perfected over 33 years as a chef.

A big draw for his chicken and waffles is house-made hickory syrup. Though it doesn’t contain meat, he said the syrup instantly reminds diners of that familiar, sweet and smoky flavor.

“We’re really excited to be part of the fair,” Wilson said. “We’ve got a new truck which is basically a 33-foot-long commercial kitchen.”

Wilson also will bring a dish he hopes will catch on: deep-fried banana pudding. The from-scratch pudding is rolled into balls and then dipped into Nilla Wafer crumbs and fried, making them sweet, crunchy, creamy treats.

In addition to its fair menu of chocolate-dipped cheesecake, cookie dough and strawberries, it’ll roll out deep-fried chocolate, a play on classic salty dog pralines made with salted caramel and chocolate ganache, wrapped in pastry and fried.

All of this also means that fairgoers might need to plan two dates: one with someone to help you eat food, and one with a personal trainer.