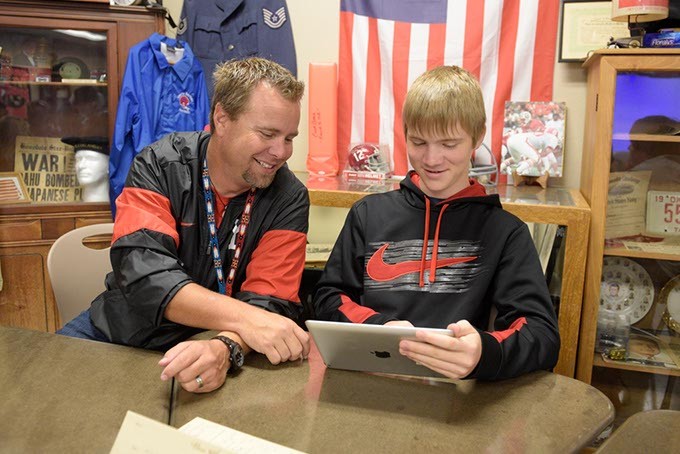 Educator Rob Davis has spent his career giving students a powerful sense of history and a look into the complexities of the past.

Reading from a textbook couldn’t be farther from Davis’ lesson plans. Through primary sources, Yukon students gain historical perspective and approach their learning like historians, diving into the time period and grasping the issues through the voices and words of tribal chiefs, early Oklahoma settlers, past governors and more.

In recent years, classroom technology has allowed those primary sources to be presented digitally, for example on iPads, in the hands of students.

According to Davis, technology and digital sources push his students to a higher level of understanding.

This summer, Davis shared and compared his resources and lesson plans with other history teachers in Oklahoma. Those educators combined resources and their own classroom exercises to curate the digital textbook for Oklahoma History, one of nine courses covered in the Oklahoma Library of Digital Resources.

Launched in August by the Oklahoma State School Boards Association (OSSBA), the library offers free digital textbooks, lectures, activities and lesson plans for high school teachers. Housed in iTunes U, the library can be accessed at okdigitalresources.com by all 584 Oklahoma school districts at no cost. OSSBA and global technology company Apple collaborated and created the library, which can be accessed on both Apple and non-Apple products.

The library ensures all Oklahoma teachers have high-quality digital resources to use while teaching in their classrooms. School board association leaders think schools can maximize their students’ learning power in technology, improve engagement and shrink the digital equity gap by utilizing the library. It could also shift state dollars from textbooks to technology.

Oklahoma joins six other states in collaboration with Apple’s iTunes U to offer high school content. Currently, OSSBA and a group of middle and elementary school teachers are the first in the nation to develop a digital library for courses covering grades kindergarten through eighth grade. The library is set to go live in January.

When school began in August, Oklahoma educators were tasked with classroom implementation of the Oklahoma Academic Standards approved by lawmakers in the spring.

Months before, a group of 40 educators began aligning resources to the new state standards. As part of the OSSBA digital library project with Apple, Oklahoma’s top high school educators selected resources to match the online courses. Teachers didn’t write the curriculum, but located, vetted and curated resources and exercises for teachers to use in their classrooms.

“We are making Oklahoma educators’ lives hopefully better,” said Davis, who took part in creating both digital libraries. “We are finding and categorizing by state standards. Students will find [the content] useful, engaging and even entertaining.”

Ann Caine, OSSBA’s director of education leadership, heads the project. A former public schools superintendent, Caine said a majority of teachers want to integrate technology into their classrooms, but switching from traditional learning can take hours of preparation.

“At the end of the day, who truly has the time to vet what is high-quality and what meets the new Oklahoma Academic Standards?” she asked. “Teachers don’t have time.”

The digital library’s easy-to-use format makes it accessible to everyone, even those not entirely comfortable with using technology.

In the past, Oklahoma City teacher Dan Covey spent hours digging for digital resources that fit his life science courses.

The 13-year educator goes beyond basic Google searches and has located science simulations created by college researchers and projects posted online by the National Science Foundation. Covey sees technology in the classroom as an important asset to prepare students for the future, especially since students are already digitally fluent.

Covey said he was excited to work on the middle school science course for the digital library. The concept of a digital library utilized in the classroom connected with his approach to teaching at Belle Isle Middle School, which is part of Oklahoma City Public Schools.

“The resources that we are able to access you could never put into a textbook,” Covey said. “You can click to a document, which becomes interactive. If you don’t know a word, hold your finger down and look it up. You can highlight a section and search for more information. … This is interaction where kids can go off on learning tangents, very different than putting a textbook in front of them.”

In Yukon, Davis is one of many teachers turning to iTunes U. At the swipe of a finger, Davis and his students can hear audio recordings of influential Oklahomans, like U.S. Sen. Robert S. Kerr, Wild West entertainer Gordon W. “Pawnee Bill” Lillie and civil rights activist Clara Luper.

In the moments after his students listen to a powerful speech by Luper, Davis announces his assignment. He wants his students to write a reflective piece. How did they feel when they heard Luper, the face of the Oklahoma civil rights movement, describe the social injustices she experienced decades ago in the neighboring community?

“My kids love it,” Davis said. “It is not the ordinary, but the extraordinary.”