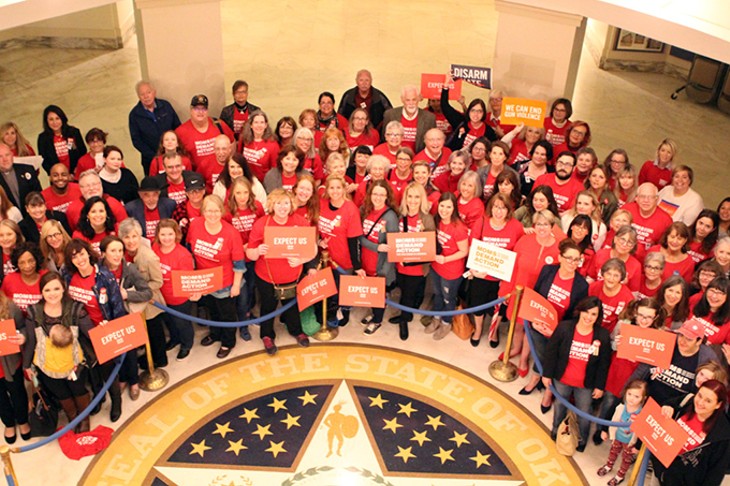 Days after the second-deadliest shooting at a public school in the United States, Sallisaw High School senior Jamie Pool learned about the student-led March for Our Lives demonstration planned for March 24 in Washington, D.C. The movement expected to bring huge crowds to rally over gun issues and school safety measures was expanding to other major cities across the country. Oklahoma City was missing from the list.

The teenager grabbed her cell phone and quickly typed out a text message to a fellow student. Would they help her organize the March for Our Lives rally in Oklahoma City? The reply was yes. In late February, Pool created a Facebook event page for the Oklahoma City march, pledging an Oklahoma version of the national movement and a call to action for stronger gun control measures following the Parkland, Florida, killings. The event page began to rack up thousands of views and collect hundreds of comments — especially in those first few days.

“I never imagined that I would be doing this,” Pool said. “After getting together with my friends and discussing it, we realized that we had more power than we thought.”

About a dozen Sallisaw High School students from the small eastern Oklahoma community more than 150 miles away are planning the march and rally at the state Capitol. Fellow Oklahoma students have lent support, taking on some planning duties and committing to bring themselves and friends to the midday Saturday march. Parents, teachers, faith leaders, children’s advocates, gun control advocates and others have pledged support, though Pool said the march is a student-led, student-organized event.

The March for Our Lives, along with the National Student Walkout planned for one month after the Florida school mass shooting on March 14, come at a time when there is a national groundswell of support for tighter gun control. While guns still remain a divisive issue in American politics, students — or younger voters and soon-to-be-voters — are setting a new tone for gun-issue conversations.

In Sallisaw, when Pool and the other March for Our Lives organizers get together, they discuss their desires to see “common sense gun reforms,” like implementing more robust background checks, raising the minimum age to buy certain firearms and banning bump fire stocks (devices that make it easier to fire rounds more quickly).

Their message to other students who want to get involved in the March for Our Lives or other similar protests is to share their feelings and fears with fellow students. They can expect a confirmation that they are not alone.

“Talk to anybody you know who feels the same way you do,” Pool said. “You can organize something too.”

The main March for Our Lives at the nation’s Capitol has attracted the support of well-known celebrities and politicians and advocacy groups Everytown for Gun Safety and Moms Demand Action for Gun Sense in America.

The Oklahoma Chapter of Moms Demand Action, which hosts meetings in Oklahoma City, Norman, Edmond and Tulsa, is playing a supportive role in the local march, said Sara Lenet-Rotenberg, who oversees the chapter’s social media for the nonpartisan, grassroots organization.

“This is a real lightning-in-a-bottle moment that has come because a nation has been pushed too far because these school communities have been pushed too far,” Lenet-Rotenberg said. “The students’ reaction speaks for itself. We are here to support them and amplify their message. It has been incredibly gratifying to watch. If they can move this issue forward and make for safer communities, we are more than happy to let them take us over the finish line.”

The Oklahoma chapter has five years of experience promoting responsible gun laws and fighting pro-gun measures at the state Capitol. The statewide chapter bills itself as the voice of reason in the ongoing gun debate. Its members are not against the Second Amendment. Instead, they seek common sense solutions to gun violence. They convey their message at the state Capitol as well as in daily interactions with fellow Oklahomans.

“What we are really about is empowering people who are sick of that pit in their stomach when they drop their kids off at school, who are sick of the headlines, who are sick of feeling like they are not represented by their legislator on this issue,” Lenet-Rotenberg said. “We are somewhat of a conduit to channel some of those feelings, to channel that grief and anger.”

In recent years, when members pushed back against legislation that would allow guns on college campuses and the carrying of guns without a permit, both measures died in the legislative process. This session, members are focused on bills that expand the state’s stand your ground law to churches, allow carrying without permit and authorize school boards to create their own firearm-carrying program for school personnel, among others.

The gun debate hits home for students in the Oklahoma City area. Last week, two eighth-grade students organized a walkout at northwest Oklahoma City’s John Marshall Mid-High School to add their voices to the national discussion on gun violence in schools. After 20 minutes, the peaceful protest ended with the crowd of about 200 students heading back to class.

At the state’s flagship university, University of Oklahoma students plan to walk out to display their support for gun reform measures at 12:30 p.m. April 20, part of a nationwide protest that marks the anniversary of the Columbine High School shooting.

The issue of students protesting with marches and walkouts has been a sticky subject for schools across the country. Some administrators support the students’ right to protest while others see the protests as disruptive and in violation of school policy.

With March for Our Lives Oklahoma City, a relatively small number of adults have voiced displeasure with the students’ efforts. So far, no student has spoken against the march, Pool said.

The march begins 11 a.m. March 24 in the parking lot of Oklahoma County Election Board, 4201 N. Lincoln Blvd. The crowd will march to the Capitol building, where students will address the crowd, speaking on a number of gun issues and ways to get involved.

“They will realize how powerful their voice and their vote is,” Pool said. “Together, as a community, we can make the change that we need.”

Print headline: New voices; Across the country and in Oklahoma, students are drawing attention to gun violence.