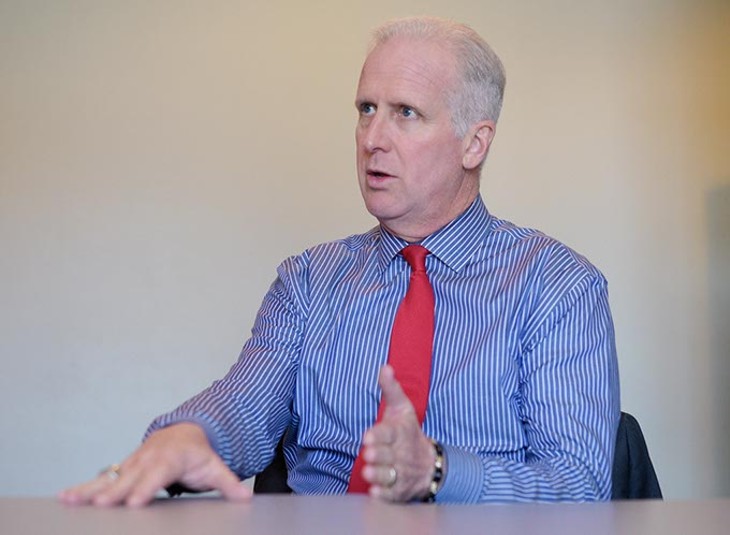 When Devery Youngblood walks the campus of any one of Oklahoma’s 25 public colleges and universities, he goes through a checklist.

As the leader of Oklahoma Tomorrow, a newly created independent nonprofit with a mission to protect higher education funding, Youngblood wants to sits down with the college president, followed by the president’s cabinet and chief financial officer. After a tour of the campus, he hears from students.

“I’ve learned more from the students than anybody,” Youngblood said, “and I’ve learned a lot from the others.”

Youngblood listens to students explain rising tuition bills and shrinking tuition waivers and the interminable waiting lists to get into the courses they require, like science, engineering and math. All of Oklahoma’s public nursing schools are operating at student capacity, leaving prospective students with the option of waiting, selecting another program or giving up on their career dreams.

Higher education has been an easy target for budget cuts in recent years, forcing the state’s schools to lay off faculty and staff, postpone investments in new facilities and raise tuition and fees. In May, Oklahoma lawmakers passed a state budget cutting appropriations to higher education by 16 percent, or $153 million, for the current fiscal year.

While college leaders learn to do more with less, a financial burden increases on students and their families. Youngblood and fellow leaders of Oklahoma Tomorrow see the state shifting money away from students who generally need the most support in getting a degree, like the young mother of four completing her associate’s degree at Oklahoma City Community College applying for admission at the University of Central Oklahoma and the first-generation college student escaping poverty by earning an advanced degree.

“‘That’s what you took $153 million from, and it bothers us,’” he said, referencing more than 400,000 students. “You have to take steps today in order to get out of the rut tomorrow. If you want a better Oklahoma tomorrow, you have to make better decisions today.”

When state lawmakers return to the Capitol next month, they will find Oklahoma Tomorrow ready to advocate for adequately funding Oklahoma’s colleges and universities. The message comes from the hundreds of thousands of students and their families, but also the private sector.

“The list of jobs has a lot of openings that we can’t fill because we are not graduating. … We have jobs waiting out there for people, and that is dangerous in the long term,” Youngblood said. “If you can’t fill the jobs, especially private-sector jobs, those companies will go somewhere else.”

Oklahoma’s state college system supports the state economy, attracts and retains the state’s most talented students, produces research and shapes state policy. Providing wide access to higher education is another important aspect of the system, which Oklahoma Tomorrow recognizes. Only five of the state’s institutes of higher education are located in metro areas.

Earlier this month, Oklahoma State Regents for Higher Education requested $957 million, which would restore most of the $153 million cut, for the coming fiscal year in a public hearing before state House members. With lawmakers predicting a nearly $900 million budget hole, there is much uncertainty regarding the 2017-18 state budget.

While Oklahoma Tomorrow’s leaders see the challenge ahead, they also can’t sit back and watch from a distance.

“It has become clear that we don’t have enough revenue,” Youngblood said. “You can either raise taxes and make dramatic cuts or you create a growth economy that produces more revenue. We are about the latter. … It is going to take all of us: those in the private sector, the higher education community and the legislators. The three of us are going to have to be on the same page, put what’s happened in the past behind us and work together to move this forward.”