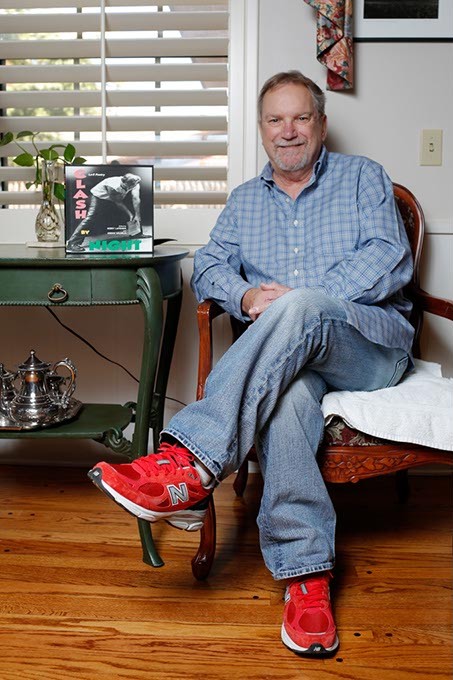 In December 1979, the English punk band The Clash released the album London Calling in the United Kingdom. They released it a month later in the United States. The record became a critical and commercial success that impacts music to this day.

In May of this year, writers Gerry LaFemina and Gregg Wilhelm created an anthology of poems influenced by songs from London Calling. Poets throughout the United States, including Oklahoma City writer Richard Dixon, contributed to Clash by Night.

Dixon is retired teacher and tennis instructor in his late 60s. He worked in the Oklahoma City Public School District for more than 30 years as an instructor for students with special needs. His penchant for writing, and poetry in particular, began when he was young.

Dixon’s original writing inspiration was the influential stand-up comedian Richard Pryor and his commentary on racial and societal issues. Dixon’s writing began with comedic observational monologues, but he did not see himself as a comic.

“I never felt I had the nerve to get up in public and do a routine,” he said. “I short-handed that down to poetry.”

Over the years, his verse has evolved to include serious tones along with his humor. Subjects peppering his current writing include everyday tasks such as building a fence.

He also draws heavily from his travels throughout the United States.

The task of writing poetry about The Clash is a notable tangent from his recent endeavors.

“It was a challenge, but I remember the feelings I had from the punk rock movement,” he said.

Dixon is a longtime connoisseur of music and enjoys an eclectic range of musical styles. His roots took hold in the waves of 1960s AM radio, when The Rolling Stones and The Beatles were new and changing the landscape of popular music.

This foundation of quality songwriting set a high standard for Dixon’s taste. When speaking on the topic of late ’70s punk, Dixon often compares and contrasts The Clash with another legendary band of the era.

“The Sex Pistols were publicity magnets, publicity drawing,” Dixon said, “but The Clash were all good musicians and good songwriters.”

Dixon said The Sex Pistols tossed aside the history of rock music, while The Clash not only appreciated those who came before, but sought to write music in multiple styles.

It’s this respect for musicianship and songwriting that played a part in his decision to accept an offer to contribute to Clash by Night.

He submitted two poems. One was about the song “London Calling,” and the other was based on “Train in Vain.” The latter was chosen for publication.

“I wrote the poem trying to get the same feeling of what the guy in the song is telling his girlfriend,” Dixon said.

Co-editor Gerry LaFemina said when the idea of poetry about a specific album was conceived, the choice was obvious.

“Gregg [Willhelm, co-editor,] and I were talking about the nexus of music and literature, particularly poetry,” he said. “Beyond being a poet, I’m also a musician, so the notion of covering songs and then records came up. So we came up with this idea of how poets might interpret covering an album, and when we threw the question into the air of what album, we both said London Calling.”

The response received by LaFemina and Willhelm from writers wanting to be part of the project was vast. In the end, only 40 poets made the cut.

“What happened next was putting a call out through various means for poems covering the songs on the album and allowing for “cover” to be loosely interpreted. We received a large number of submissions and then had to sort through them,” LaFemina said. “Richard’s poem made the cut. And I’m glad he’s part of the book.”

LaFemina said the next album to be featured in this series known as “lo-fi poetry” will be Pet Sounds by The Beach Boys. When asked if he would like to participate in the project, Dixon replied with a smile.

“I could write a poem for every song on that album,” he said.

Print headline: Calling poem, An Oklahoma writer contributed to a book of poetry based on The Clash’s legendary album London Calling.