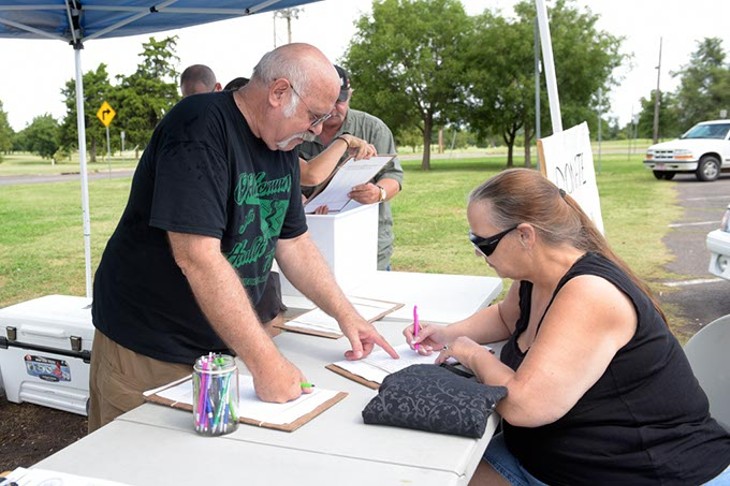 Stories of hope and healing keep volunteers like Mike Lee standing in the summer heat.

Lee supports Oklahomans for Health, a grassroots organization pushing to legalize medical marijuana in the Sooner State. Since May 14, volunteers have canvassed the state, connecting supporters to State Question 788, an initiative petition to create new laws for Oklahomans who wish to allow marijuana use for medical purposes.

Stationed at the intersection of Meridian Avenue and Northwest Expressway under a pop-up tent, Lee greets people with a smile and a pen. In return, he said he and other volunteers see proof of the need and benefit of medical marijuana treatments and hear powerful testimonies from everyday Oklahomans.

Recently, a woman told Lee about topical cannabis she applied to her arms, which are weakened by a bone disease. The cream alleviated pain and allowed her the relief she needed to live her life. Now, the former California resident goes without.

Frank Grove, Oklahomans for Health board member, said an elderly couple — both battling cancer — signed the petition out of frustration. Their physicians could consider medical marijuana to ease chemotherapy side effects or relieve pain. However, those aren’t legal options in Oklahoma.

“When you hear of people suffering all day long, it’s hard not to act,” Grove said. “We are doing everything we can to help.” 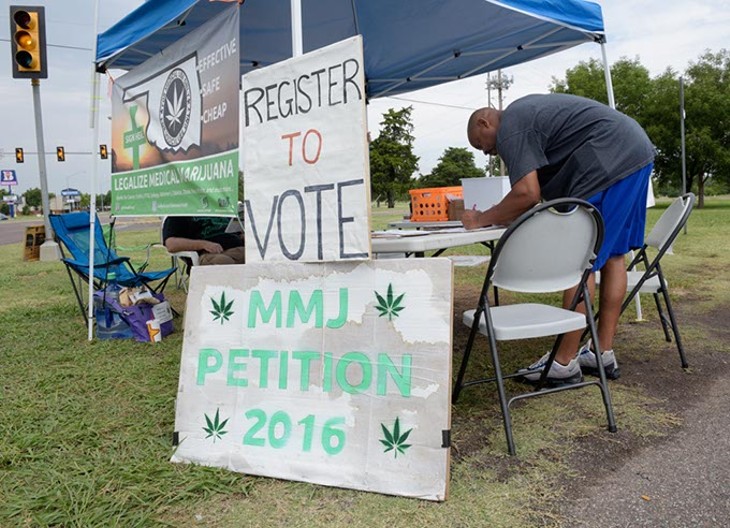 On Aug. 11, Oklahomans for Health will submit signed petition sheets to the Oklahoma Secretary of State’s office as part of the organization’s drive to bring medical marijuana to a public vote in November. The Capitol visit is not the organization’s first, but leaders like Grove and Joe Dorman are optimistic it will be their last.

During the summer of 2014, Oklahomans for Health volunteers collected more than 75,000 valid signatures in support of a medial marijuana question appearing on a statewide ballot. Proposed as a state constitutional question, the group fell short of collecting the necessary number of signatures.

Dorman, a former Oklahoma legislator and gubernatorial candidate, joined the movement this spring. Leaders rewrote the petition language after reviewing other states’ laws.

“We took some of the best points from other states, but some of this is unique to Oklahoma,” Dorman explained.

In some states, in order to qualify for medical marijuana, a patient must be diagnosed with specific qualifying medical conditions, such as cancer, Crohn’s disease, epilepsy or multiple sclerosis. Oklahoma’s proposal, however, includes no qualifying list. Instead, physicians would have the authority to prescribe medical cannabis as they deem necessary.

“The number one question I receive is, ‘Is this going to be full legalization?’” Dorman said. “I tell them it’s not. This is only for medical treatments when under the care of a doctor. For minors, it would take two doctors to sign off.”

The movement seeks statutory reform and is required to collect signatures of registered voters equal to 8 percent of the last gubernatorial election: 65,987.

The big question plaguing supporters and volunteers is, Will the signature requirement be reached? Oklahomans for Health’s petition is the third medical marijuana effort launched in as many years. A separate group, Green the Vote, collected signatures for a constitutional amendment in the fall but fell short.

Dorman believes Oklahomans want a medical marijuana question on the November ballot and cites a 2013 SoonerPoll that found 71 percent of Oklahomans favor medical cannabis use.

“We know that number has grown since the poll,” Dorman added. “The difficult part is getting [medical marijuana] on the ballot. That’s why those folks who want to see it on the ballot need to find a place to sign. We can’t take this for granted.”

With 16 days left to collect signatures, the mood was optimistic among volunteers and signers at the tent in northwest Oklahoma City. Every hour, volunteers hear at least a few drivers honk car horns and wave in support.

A few hundred signatures are collected each day at the OKC spot, where volunteers work 10 a.m.-11 p.m. Voter registration forms are offered beside petition sheets on the table. Lee said they’ve helped hundreds of Oklahomans register to vote.

Not everyone supports medical marijuana use. Oklahomans for Health volunteers related a handful of negative interactions with opponents and, at times, law enforcement officers. Some voters stop by to share their support but don’t sign the petition, referencing pressure by employers and fear of people linking their name to the effort.

If the effort succeeds in getting onto the November ballot, Oklahomans for Health volunteers will continue advocating and educating voters on the issues at stake. Medical cannabis is not a miracle cure for anything; however, studies show it helps treat multitude illnesses. Personal testimonies, like those of children who have daily seizures and adults who experience multiple sclerosis-related muscle spasms, will be recorded and shared on social media in the weeks leading to the election.

The stigma attached to medical marijuana use is the greatest challenge before Oklahomans for Health, organizers said.

“People will tell us they drove by once or twice before they stopped to sign,” Lee said. “Either someone in their family could have benefitted or they know of a situation that could have ended differently with marijuana.”