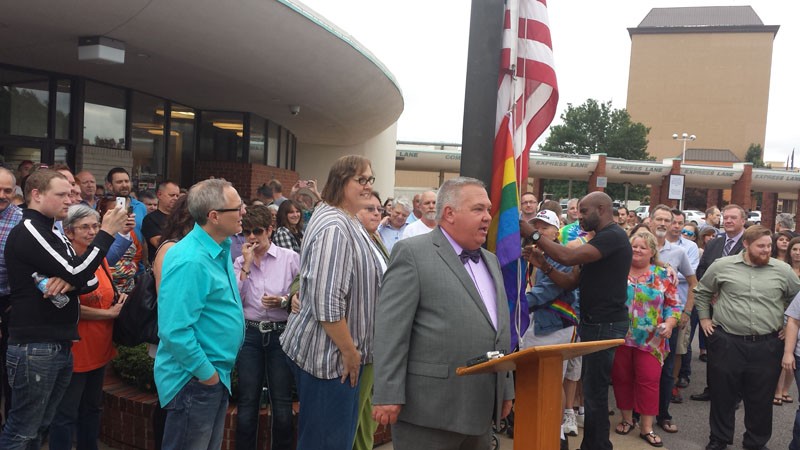 “Someone once said it would be a cold day in July before marriage equality ever comes to Oklahoma,” Scott Hamilton joked last Friday.

On a day that hit the low 60s during what is normally a sweltering Oklahoma City summer that seemed close enough.

The 10th Circuit Court of Appeals ruled last week that Oklahoma’s ban on same-sex marriage was unconstitutional, affirming a district court ruling from earlier this year and pushing the state one step closer towards recognizing the marriages of same-sex couples.

Marriage licenses for gay and lesbian couples are not currently being issued as the same court put a stay on its ruling, awaiting a likely appeal. However, Oklahoma’s case, along with a handful of others, appears to make it more likely the United States Supreme Court will take up the issue of same-sex marriage at some point over the next year.

“We are living as witnesses to something that a decade ago I never thought possible,” said Hamilton, executive director of the Cimarron Alliance, an Oklahoma City-based organization that advocates for LGBT rights.

With hundreds of supporters behind him, Hamilton raised the American flag, along with the rainbow LGBT flag in front of the Cimarron Alliance’s headquarters during a rally to celebrate the court’s ruling.

A few miles away, at Mayflower Congregational United Church of Christ, another celebration was taking place.

“This goes beyond a courtroom,” said Troy Stevenson, executive director with The Equality Network. “The validation and dignity it brings to the couples involved. It’s becoming clearer and clear by the day ... that this is no longer a question of if but when.”

Amanda Snipes, who also works at The Equality Network, said Friday’s ruling gave her hope that she will be able to marry her girlfriend next year.

“It continued to affirm to myself and my fiancé that our optimism is correct, that we will be getting married in the fall of 2015,” Snipes said.

While LGBT advocates celebrated the ruling, others were quick to criticize it. Gov. Mary Fallin said it was an example of the federal government overstepping its bounds.

"Today's ruling is another instance of federal courts ignoring the will of the people and trampling on the right of states to govern themselves,” Fallin said in a statement. “In this case, two judges have acted to overturn a law supported by Oklahomans.”

Fallin said the ruling would be appealed, although her office has no control over that matter.

Republican Rep. Josh Cockroft took to Facebook to express his displeasure with the ruling.

“Once again, the judicial activism of three people has overruled the rights and wishes of over 1 million Oklahomans,” Cockroft wrote, referring the three-person appeals court, which voted 2-1 in favor of same-sex marriage. “Marriage is between one man and one woman. Period.”

Cockroft also said that while gay individuals should not be demonized, their lifestyle did not make sense “economically, practically, and morally.”

Hamilton responded to the argument for state rights and said there was a more important matter at stake.

Other LGBT advocates said civil rights should not be voted on by the public, but rather the Constitution affords equal protection to all, including when it comes to marriage.

“Even here in the reddest of red states, there are plenty of people who value what the Constitution declares as equality for everyone,” Hamilton said.

Many religious leaders across the state also responded to the ruling with many saying it was a unbiblical view of marriage. The Most Rev. Paul S. Coakley, archbishop of the Roman Catholic Archdiocese of Oklahoma City, claimed gay relationships lacked one of the most important parts of any marriage.

“As I have said in the past, only the union between a man and a woman brings forth children,” Coakley said.

The Tulsa County clerk’s office, which made the appeal to the circuit court, made the same argument that same-sex marriages should not be valid because they lack the ability to procreate. In its ruling, the court said the ability to have children was not a standard for marriage.

“Oklahoma’s ban on same-sex marriage sweeps too broadly in that it denies a fundamental right to all same-sex couples who seek to marry or to have their marriages recognized regardless of their child-rearing ambitions,” the decision read. “As with opposite-sex couples, members of same-sex couples have a constitutional right to choose against procreation.”

The Supreme Court could decided to take up a same-sex case next year, which would bring finality to the legal debate taking place across the country. However, if the Supreme Court decides not to hear Oklahoma’s appeal, or any others, same-sex marriages could become legal in Oklahoma as early as this year.

According to The Williams Institute, which uses U.S. Census figures, there are over 6,000 same-sex couples living in Oklahoma.