Oklahoma’s US Roaster Corp. is on the cutting edge of the coffee industry

Dan Jolliff didn’t foresee the explosion in neighborhood coffee shops when he first entered the industry in 1979; he was only following the family lineage.

His father was a salesman for Oklahoma-based Cain’s Coffee back when coffee was mostly enjoyed at home, in the office or in a restaurant. Jolliff primarily used those markets when he founded Coffee Professionals in Wilson.

As that company grew and his brother and parents joined as partners, Jolliff said he wanted to explore the mechanical side of the coffee industry and embrace his natural proclivity to tinker. Jolliff sold his shares in Coffee Professionals (which was rebranded to Jolliff Coffee in 2008) to his family, started US Roaster Corp. around 1996 and moved into a downtown Oklahoma City building at 1530 W. Main St. in 1998.

“I’m an experimenter,” Jolliff said with a sly smile.

US Roaster Corp. started with Jolliff and one employee refurbishing old roaster equipment for sale, but by 2004, they started to develop their own 3-kilo roaster. Between 1991 and 2005, the number of independent dedicated coffee shops in the United States grew from approximately 1,650 to over 24,000 and was at more than 31,490 by 2015, according to global marketing agency Mintel.

US Roaster Corp’s growth has mirrored the industry’s expansion. It has gone from building 3-kilo roasters to designing, fabricating and engineering 300-kilo roasters that are bigger than some houses, all under one company with 50 employees.

Roaster Corp’s main building houses a drafting office, sales, a small shop called Coffee Dan’s and production on smaller units. Across the street, US Roaster Corp’s production expands in a 100,000 square-foot facility, where it is putting the finishing touches on its first 300-kilo roasters that will be sent to the Dallas metro’s Parks Coffee and Bellevue, Nebraska’s Scooter’s Coffee and sell at about $500,000 per unit.

The 300-kilo roaster was developed in a partnership with Oklahoma State University’s College of Engineering, Architecture and Technology (CEAT) that supplies senior engineering students looking to gain hands-on experience. 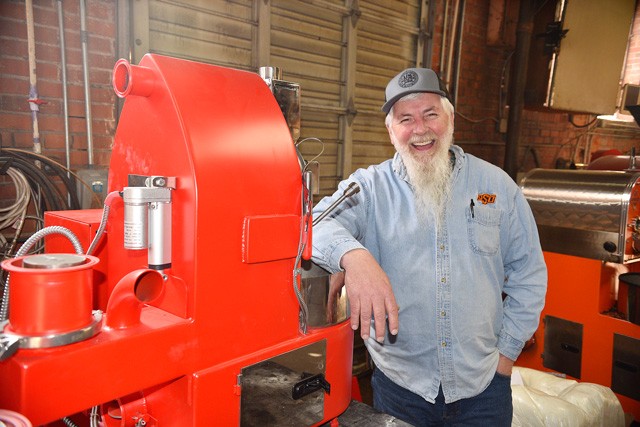 Jolliff said CEAT has been instrumental in facilitating US Roaster Corp’s growth and is one of the state’s resources to help small businesses. US Roaster Corp has also received two matching grants from the Oklahoma Center for Advancement of Science & Technology.

“Oklahoma has a lot of things built into the state to help small businesses grow. It is amazing how much help you can get, but you have to try hard and put your money on the line. Many times, my house was hocked to make the next debt, but I cannot think of a better place to be in business than Oklahoma,” Jolliff said.

While the 300-kilo is big and exciting, Jolliff knows US Roaster Corp’s niche in the marketplace is small roasters and coffee shops and cafes. It used its second OCAST grant to develop a cutting-edge, environmentally friendly 12-kilo roaster called The Revelation, which he refers to as a “mini Rev.”

“For a coffee roaster manufacturer, we are by far on the cutting edge, which we don’t promote enough,” Jolliff said. “Our competitors are running around saying that they got the first on something, and they really didn’t. We beat them by a long time.”

Running on electricity, Jolliff said the mini Rev is the only roaster on the market that is totally smokeless and doesn’t require a vent. It also has the ability to connect to the cloud, which allows users to share settings or for a company to program uniform settings across multiple locations.

“Every doughnut shop can put in a mini Rev, and it would be a profit center for them,” Jolliff said. “It will make the average shop somewhere about $60-$80 an hour, and it runs automatically. All they have to do it clean it at the end of the day.”

The development of the mini Rev has allowed US Roaster Corp. to begin to break into the Chinese market, where the company has already sold 60 to 70 machines, once they’re finished.

“Folks in China and Korea have tried to develop something similar, but they haven’t been successful. Many Chinese coffee shops are small because rent is so high,” Jolliff said.

The next challenge for US Roaster Corp. is to reduce production time on the mini Rev. It currently takes about 30-40 days to make a 12-kilo model, which leads to $7,500 invested in each machine once labor, insurance and overhead are factored in. Through the CEAT partnership, Jolliff said production could be reduced to three to four days.

“That way, we can sell the machine for less but make a higher profit and increase market share,” Jolliff said.

Print headline: Sooner roaster; Oklahoma’s US Roaster Corp. is on the cutting edge of the coffee industry.