Even though the weather doesn’t reflect it yet, it’s Oklahoma’s climatological autumn. In other words, Oktoberfest season. The Märzen, or March beer, is the seasonal standard. Rich in malt rather than hops, these beers — sometimes referred to in style as “festbiers” — tend towards the sweeter side. While three of these offerings are repeats from last year’s list as they represent the “Oklahoma standard” of Oktoberfest brews, we’ve also broadened our list this year to include both out-of-state and German selections. 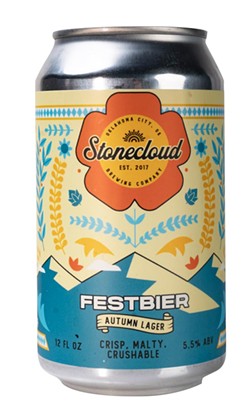 Stonecloud has really ramped up its game on more traditional beer styles since last year (their Classique and Lite are refreshing versions of the pilsner standard) and this year’s festbier falls perfectly into that lineup. If you’re into their more unique offerings, this one may not be up your alley, but when it comes to doing a classic justice, there’s a reason Stonecloud is one of the most lauded breweries in the nation and it’s always great to get your hands on their fall seasonal.

For hopheads who just cannot imagine a beer without some of the bitter flower aftertaste, Anthem’s Oktoberfest is right for you. Even though the IBUs are listed on the can are only 20, which is pretty common for a märzen, there’s definitely a taste of bitterness in the finish. The 5.5 percent alcohol content is also on par for an Oktoberfest beer rather than a hopped beer, though it may be the Viennese malts that are ac- tually providing the bitter twist.

TwistedSpike’sOktoberfestofferingis definitely on the sweeter, maltier side of this year’s autumnal offerings, but that’s not a complaint. For those who prefer the heavier flavor in their autumnal beer, this one definitely delivers. Even though the IBUs register at 30 for this brew, the malted flavor definitely tamps down the Bavarian hops. At 5.8 percent, the weight of this beer’s flavor will stop you before the alcohol content does.

sthisyear’snodforourTulsa selection (we gave plenty of love to Cabin Boys in our Tulsa-centric issue). Another beer that they have been brewing season after season, the 2021 run is as good as it’s ever been. A balance of sweet and crushable, with a tad more hops than some Oktoberfest beers, this blue-and-white can is always a sight for sore eyes as the breeze starts to crispen. The flavor holds well for months, so stock up.

CoophasbeenbrewingitsOKtoberfest for years now, and it’s a personal fall standard. While the malt and yeast definitely shine through, it’s easily the most sessionable beer of the lot and, with an alcohol by volume content of 5.6 percent, it’s easy to get through a six-pack and not regret it in the morning. Though the company’s full name is CoopAleWorks, they produce a mighty fine lager each autumn.

Definitely taking the award for our imaginary Best Name of an Oktoberfest Beer category, but they also receive high marks from us in all other categories as well. Known for their 401K pilsner, Awkward Encounters has a character all of its own while being distinctly festbier material. Coming in at 5.1 percent ABV, this is one of those six-packs that you’re going to lose count of, opening the fridge for the last one to find you’re holding the final empty can in your hand.

This year’s south-of-the-state-line selection is another one of those you see year after year on store shelves (and we pick up at least one six-pack a year). It clocks in highest in alcohol content among our choices this year at 6.7 percent ABV, which doesn’t necessarily serve its taste as well as it does catching a buzz quicker. Still a perennial favorite, we forgive them for their central Texas location (though they could take some Märzen tips from their southern neighbor Shiner).

Bell’s is a name we’re seeing a lot more on store shelves and on taps in Oklahoma lately, and we’re not mad about it. This Michigan beer company is more widely known for its flagship Oberon Ale, a wheat beer, but this Märzen is also notable. This one will be more for fans of less sweet Oktoberfest beers, with a quickly disappearing aftertaste that makes it easier to drink quickly, and at 5.5 percent ABV, it’s relatively safe to do so.

Along with Warsteiner, Paulaner are the gold-standard German beers that can (and have been for decades) easily be found on Oklahoma store shelves. According to the Munich company, they’ve been brewing with just water, hops, yeast and malt for nearly four centuries. A history lesson in a bottle, Paulaner’s Märzen tastes like everything you think of when it comes to German beer: rich, malty and smooth. If you haven’t already, try tasting this one in tandem with their Hefeweizen.

Imported by Paulaner (with a similar label design), you might consider this a sister beer to that one. Reportedly founded in 1417, this Märzen tastes about as “old world” as it gets. With the European bottle standard of 11.2 ounces (same as Paulaner), the quantity tones down the ABV of 5.8 percent per bottle, but the malty and less sweet flavor makes the serving size taste as robust as a pint. If you’re going to try one Oktoberfest beer this year, make this your top choice.