Oklahoma Gazette chatted with Scrooge for a few minutes during Lyric Theater of Oklahoma’s production of A Christmas Carol, which runs through Dec. 27. 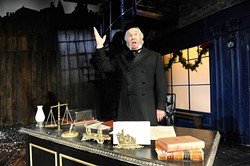 Say the name Ebenezer Scrooge and specific words immediately come to mind: miser, cranky, cheapskate. They are followed by words like redemption, of course, but it’s that first impression that sticks with people.

Scrooge, a man of many moods, is Charles Dickens’ awful-turned-wonderful protagonist from the 1843 novella A Christmas Carol. He has been portrayed many times in many productions ever since.

Oklahoma Gazette chatted with Scrooge for a few minutes during Lyric Theater of Oklahoma’s production of A Christmas Carol, which runs through Dec. 27. Find showtimes and tickets at lyrictheatreokc.com.

This show features a multifaceted incarnation of Scrooge made possible by Washington, D.C., actor Christopher Bloch, who also performed the role at Ford’s Theatre — yes, the one where President Abraham Lincoln was infamously shot in 1865.

On a brisk December morning after a performance, Scrooge sat at his desk and reviewed rows of figures penned on parchment. He glanced up, quill in hand, and said, “I am a very busy man,” before greetings could be made.

Attempts at small talk were met with bluster as he jumped from his chair, railing about the frivolity of Christmas.

When asked what he likes best about the holidays, he said, “I suppose it’s that they only come once a year.”

Oklahoma Gazette: What are some of your childhood memories of Christmas?

Ebenezer Scrooge: I have nothing but disdain for a holiday that left me alone, away from those I cared about.

OKG: Well, who are some of those people you’ve cared about throughout your life?

ES: There have been some people, in the course of my lifetime, who I did, to a degree, enjoy. Jacob Marley was, indeed, a good and fair business partner, and I do miss him from time to time. He carried his fair share and was an able and willing colleague.

ES: There was a girl I knew once, when I was young. Belle. But I dare not think of that, of her. (At this, his face took on a sweet wistfulness that belied his brusque manner.) I suppose I have a glimmer of a friendship with Fred; he keeps trying to ask me to come to a Christmas feast. Of course, I won’t. I suppose it’s out of some familial obligation. His mother, my sister, was a good soul who died in childbirth.

OKG: So, isolating yourself at Christmastime is an act of self-preservation? You’ve had your heart broken and now you guard it?

ES: (He paused for a moment.) Balderdash! I know nothing of such nonsense.

Print Headline: Soft spot, Ol’ Ebenezer Scrooge must love something about this city, because he’s back for a fifth year in Lyric Theatre of Oklahoma’s A Christmas Carol.