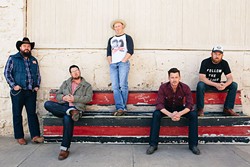 G Fest is intended to be a celebration of Muskogee’s music heritage, a history that’s inseparable from the immortal lyrics of Mighty Merle Haggard.

The inaugural music and camping festival June 16-18 in Muskogee will continue despite the country legend’s death in April.

Haggard was born in California but will forever be seen as a local hero for “Okie from Muskogee,” an iconic song he wrote with Roy Edward Burris in the heat of the late ’60s protest era. Inspired by his father’s Oklahoma roots and sensibilities, it has become an unofficial state anthem.

Appropriately, Haggard was scheduled to headline the festival in the town he made famous. Organizers said his absence, while heartbreaking, will sharpen the event’s focus on Haggard’s impact as a musician and the deep roster of artists that will pay homage to him.

The Turnpike Troubadours fiddler said his band cut its teeth playing classic country music like Haggard’s in bars and dives across the country. He first heard the tunes, including “Okie from Muskogee,” as a boy, when his father sang them around the house.

“That stuff is just ingrained in my upbringing,” he said.

Nix said modern country music has everything to learn from Haggard. There’s a quality in his music — maybe the Fender Telecaster guitar or the insight his lyrics gave about other people — that cuts deep.

Turnpike Troubadours was playing in Fort Worth, Texas, for Billy Bob’s Texas 4th of July Picnic in 2015. Haggard was set to headline the day before, and Nix and his bandmates watched near the front of the stage as the legend performed. That night, Haggard opened with a fiddle medley and played several of his hits alongside his son, Noel.

“Fiddle’s not his first instrument, you know? To combine a fiddle medley with another fiddle player; it was just really neat to watch that,” he said. “He was sharp; he could still do it.”

It was the first and last big-package country music tour Old Crow Medicine Show did, but frontman Ketch Secor knew they had to be included on it when he saw the band would tour with Haggard.

The 2003 Electric Barnyard Tour was ultimately short-lived, as sponsor funding was pulled mid trip, but Secor said traveling and playing alongside Haggard was an unforgettable experience.

“Merle was really kind and really interested in what Old Crow was doing,” he said.

Secor still remembers the first time Haggard spoke to him. It was at a show in Dixon, California, where they were both performing. Secor said there was one guy on the bill who kept talking up Haggard after the show. Secor kept to himself and put his fiddle away. He felt Haggard’s presence as the musician approached him, getting closer and closer until Secor felt Haggard’s whiskers on his ear.

The sincere kindness in the compliment stayed with Secor.

“Those three words from the master, that’s like God breathing life into the human form; it’s just so powerful to have his presence there,” he said.

Nix said the best way he can think of to honor Haggard would be to play from the heart, something he’s sure everyone at G Fest will do.

“It’s in part celebrating his life, but you have all these other great artists who are going to be there, playing really hard,” he said. “I’m not going to say it’s going to make up for Merle not being there, but it will maybe be a tribute in that way.”

A legacy like that is one thing, but Secor said no one should attempt to pick up Haggard’s torch.

“We got Merle,” Secor said. “Country music has Merle Haggard and will always have Merle Haggard. You don’t want a carbon copy because you could never do him justice.”

In the same way, Secor said Haggard didn’t need and probably didn’t want another award, honor or magazine cover before he died. The music he leaves behind is a monument itself.

Print headline: Troubadour tribute, Country music legend Merle Haggard will be missed at this year’s G Fest in Muskogee, the city he immortalized in song.