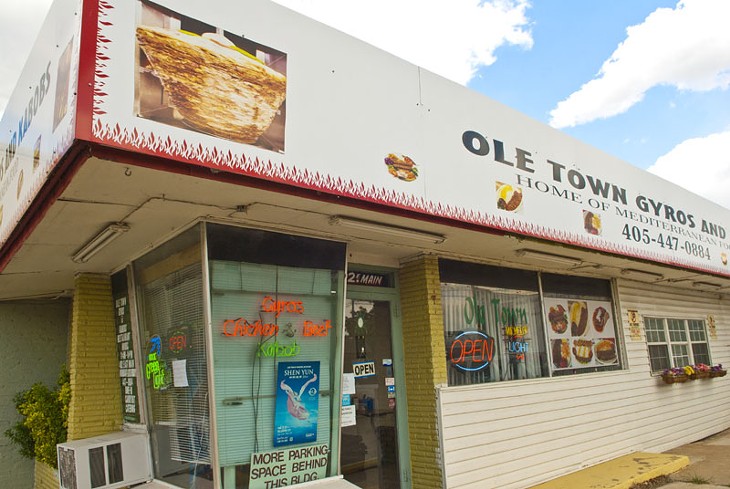 Ole Town Gyros & Kabob 402 E. Main St., Norman 447-0884 What worked: Generous portions of exotic food at reasonable prices. What needs work: The menu needs to stick with the basics and lose the corn dogs and fish sticks. Tip: Parking is scarce. Plan to park in the nearby downtown business district.

A small Norman gyro restaurant offers an Iranian take on some familiar cuisine.

Ole Town Gyros & Kabob has been on the corner of N. Porter Avenue and E. Main Street in Norman since Pluto was a pup. It’s in a former filling station and not much bigger than a good-sized sailboat. Long and narrow, it has a somewhat nautical appearance from the outside, and the interior is galleylike as well. The parking lot can accommodate maybe eight vehicles, but there are plenty of spaces nearby because it’s near the downtown business district. Eight dining tables make Ole Town a tiny joint, but many patrons opt for carryout anyway. Traditionally, North American gyro shops have been the purview of Greek and Lebanese folks with food variations dependent on their family recipes. Ole Town is operated by the Iranian- American Kazemi family. They produce a fine culinary blend of Mediterranean, American and Persian dishes that are a treat to eat. While many restaurants of this ilk offer commercially prepared yogurt as the house sauce, Ole Town makes its own. It’s Greek tzatziki using house-made yogurt that’s then mixed with fresh garlic, lemon juice and parsley. This delectable condiment may be ordered as an appetizer ($3.99), and it comes as a side with several dishes. It’s reflective of the thoughtful preparation Ole Town generally puts into its food.

A reasonable wait, plate appearance and taste all indicated that it’s not fast food. The restaurant is small enough that after an order goes to the kitchen, you can hear the resulting symphony of pots and pans. An appetizer sampler plate ($9.99) includes savory ground chickpea hummus, spicy rice swaddled in grape leaf dolma and crispy bean patty falafel with pita bread and tzatziki dip. Naturally, ranch dressing is available for philistines. If an eatery is discovered in central Oklahoma that doesn’t have ranch dressing, you will be the first to know. Among the finer entrees is what the menu describes as Mediterranean-style chicken curry ($9.99). It’s a gargantuan portion of marinated and sautéed white meat, bell peppers, onions and mushrooms served over basmati rice. Rather than overpowering the curry, it is a subtle and unusual variety that’s long on flavor without the typical funk. Chicken veggie biryani ($9.99) brings the Kazemis’ Iranian heritage cooking skills front and center. Half a dozen different countries have their own versions of biryani. This take features roasted vegetables flavored with hints of cinnamon and pomegranate seed. Gyros are assembled from thin-sliced marinated beef and lamb slow-roasted to tenderness. All that meaty goodness is surrounded by hearty pita bread. Kabobs are part of Ole Town’s claim to fame, and it serves a memorable combo platter ($16.99) of ground beef kubideh and grilled chicken. It comes with a Greek salad with iceberg lettuce, ripe olives and feta cheese. Other salads include bulgur wheat tabbouleh ($4.49) and Persian cucumbers, tomatoes and onions dressed with an olive oil, mint and lemon concoction ($4.49). With all the exotic choices, it was amusing to see more familiar items on the menu. Ole Town also serves fish sticks ($4.99), Polish sausage sandwich ($3.99), corn dog ($1.99) and Philly cheese steak ($8.99). Go totally global with a gyro taco ($4.99) or gyro pizza ($9.99). “Most of our regular customers order gyros,” owner Paul Kazemi said. “After that, the chicken and beef kabobs are most popular.” There’s exactly one item on the dessert list, so the choice is easy and one not to skip. Don’t let the tiny slice fool you; the nutty honey-laden baklava ($1.99) with its flaky filo pastry layers is decadently rich and just the right size.