Once a hit movie, now a musical 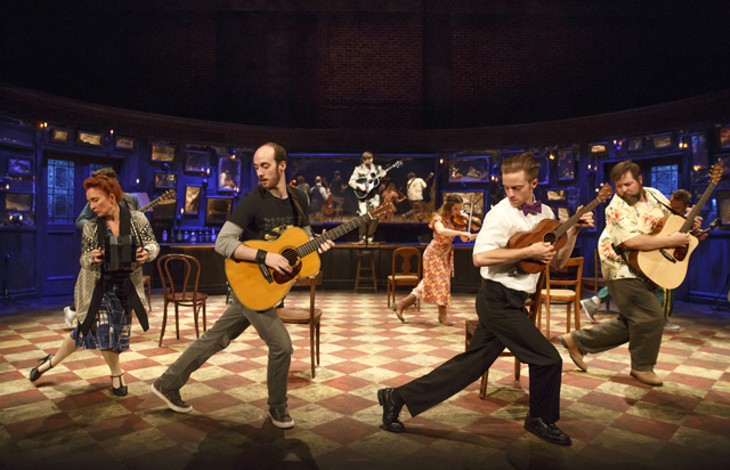 The Tony and Grammy Award-winning musical Once arrives in Oklahoma City this week to stir the soul, heal broken hearts and give hope to the lovers and dreamers in us all.

Based on the 2007 Oscar-winning film of the same name, Once tells the story of Guy, an Irish busker, and Girl, a Czech immigrant, who bond over their shared love of music. Over the course of one whirlwind week, a complex romance develops between them and raw, powerful songs explode from their musical collaboration.

Once is loosely inspired by the real relationship between Glen Hansard and Markéta Irglová who played Guy and Girl in the film version and wrote all the original music and lyrics for the film and stage versions of the show. The stage version was developed over the course of 2011, made its Broadway debut February 28, 2012, and ran for nearly two years.

The supporting characters — including the role of Baruška, Girl’s mother, played by Donna Garner in the US tour — have been fleshed out considerably for the stage.

“She’s a tough broad but still warm and funny,” Garner said. “I always think of Baruška being a little bit like a hen with her chicks under her wings that she’s trying to protect. She’s watching her daughter grow up and deal with really adult problems.”

Garner’s favorite moment in the show is when Guy and Girl sing the award-winning song “Falling Slowly” together for the first time.

“You can always hear whispers of recognition from the audience when the song starts. There’s a sense of anticipation because it’s so powerful and touching,” Garner said. “The cast joins in partway through and we all start to play together for the first time with this beautiful melody. It’s such an amazing song. There’s no way I could ever get sick of it.”

Another highlight for Garner is the pre-show during which she and the cast take the stage for 20 minutes before curtain and jam on stage in the working bar set. During this time, the audience is encouraged to come on stage, hang out and order a drink.

“For a lot of people, this experience sets the tone of intimacy and helps create a reality that’s maintained throughout the show,” Garner said. “Also, seeing a theater from the stage is always the most beautiful view.” Unlike some musicals that tend toward the fanciful, Garner said that Once stands apart for being extremely real.

“These are everyday situations and problems that the characters are dealing with — problems like adjusting to life in a new country, grieving for loved ones that have passed away and trying to keep faith while following your dreams,” Garner said.

More than just entertainment, Once is a show that speaks to people on a very deep level and changes lives, Garner’s included.

“I’ve lost a lot of family members and a husband,” Garner said. “Once has made me absolutely cherish every day, and it’s allowed me to relive the good memories of those I’ve lost.”

Print headline: From the heart, An award winning musical stirs the soul of OKC.

Speaking of Once, Oklahoma Gazette