Tulsa’s Matthew Wallace turned his passion for cataloging the past and present of Oklahoma music into the online, open-source OK Music Archives 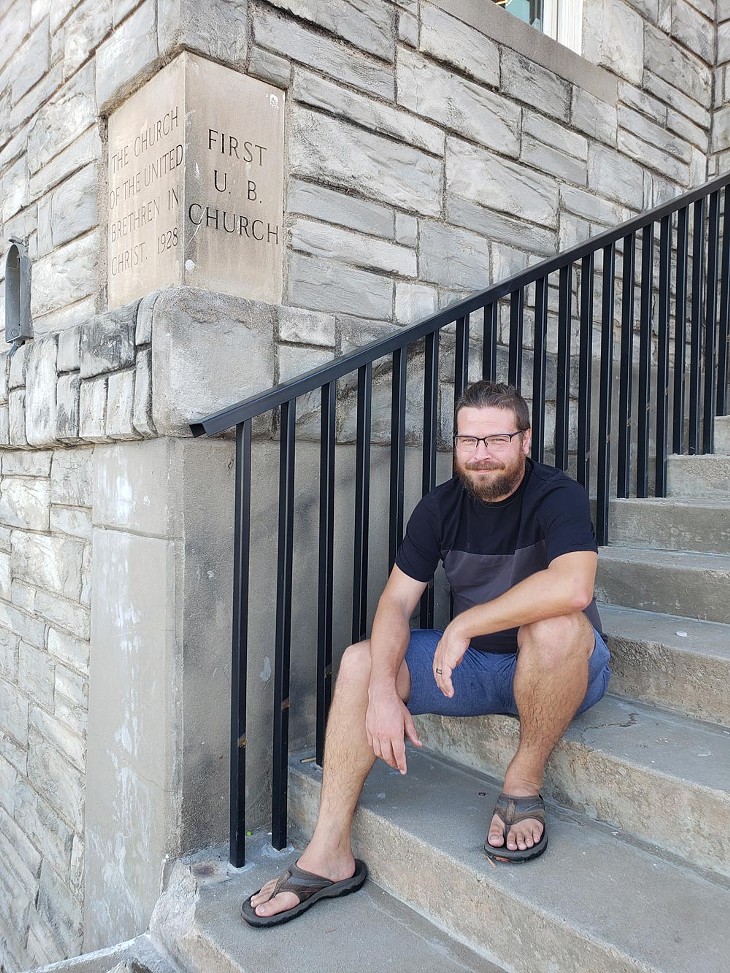 The Oklahoma music scene state- Twide is booming and beginning to establish itself as an important source of creative, diverse bands and artists, but none of that could be possible without a rich history of groundbreakers and trailblazers stretching back decades. The underground musical history of Oklahoma is way more than just Flaming

Lips and Chainsaw Kittens.
If you asked around among all the

various current music makers that are blowing up across the state right now, every one of them could rail off a host of obscure past Okie artists that influenced them. Maybe some of them banged their heads to Defenestration back in the day. Maybe they did that weird, psychedelic hippie dance (you know the one) at a Ghost of Monkshood show. There are probably thousands of notable musical acts stretching back in our state longer than anyone might realize or remember.

And that’s a problem Tulsa resident, and lifelong OK music fan, Matthew Wallace is seeking to remedy with the Oklahoma Music Archives.

“One day, I was listening to a CD by Congress of a Crow, who had broken up a decade or so earlier, and wondered who else was still listening to the album,” Wallace said. “Who is listening to Here is There’s demo or the Angelical Tears’ album? People know of Hanson, Garth Brooks, and The Flaming Lips, but do people still remember these other great acts? They should.”

That was the beginning of what would become the massive online undertaking of creating one space in which to collect and catalog all of the music of Oklahoma’s past and present.

“I decided if it was ever going to get done, I better just do it,” he said. “I took out my CD collection and started building a website with the liner information. That’s if it wasn’t a burned CD in a white sleeve. Then I started digging online for information. And I kept digging and kept digging. I read archived newspaper Battle of the Bands featurettes from the 80s and 90s. I looked at documents from the Oklahoma Historical Society. I got lucky

and found some blogs about aspects of certain scenes. It’s really been a long research project that will never, ever be complete.”

But even for all of the passion fueling his project, Wallace knew that he was never going to be able to create the kind of one-stop-shop resource for Sooner State artists that he wanted it to be all on his own. He needed to call upon the masses for help.

“I have a tendency to click through Wikipedia, starting on one subject and ending up somewhere completely different,” he explained, “so I built the site in that format, to allow it to be constantly updated by anyone and everyone.”

That decision to keep the Archives “open-sourced” has allowed countless current, active bands and artists to add their own info as well, including them alongside local legends and OK natives that have seen major breakout success like St. Vincent and Other Lives. As that interest began growing, and more and more acts started pouring their info onto the site, the collection of listings began to balloon, allowing Wallace to add an ongoing social media presence to the Archives, spotlighting a different band or artist on Facebook every single day.

“The Archives have grown from me essentially cataloging my local music collection to the largest database of Oklahoma music in existence,” said Wallace. “The way I see it is every singer/ songwriter and every band is local to somewhere. If you listen to music, and you support local, then you should be supporting local music.”

In order to better support those local musicians, and to help maintain the memory of all this forgotten music, Wallace’s next step was to spin the OKMA into a record label, working with artists past and present to reissue long out-of-print releases.

“A lot of this information, these bands, these albums that have been uncovered through my research never transitioned into the digital age,” Wallace explained, discussing the need to preserve these near-forgotten albums for posterity.

“Even those that did used platforms like MySpace, MP3.com, and more recently CDBaby, who all changed their structure over the years and lost a lot of the information out there. Those in the know might remember Fensics, Rewake, or Ultrafix, but do they remember Big Skin Hearts? Turns out a lot of people do, although it took me two years to find out anything about the artist. And now, not only have we been able to locate the artist, I am working to restore and reissue the entire discography through our label.”

The entire project is designed to be non-profit. Any revenue from sales of the label’s reissues goes right back into helping fund the OKMA. Anything extra goes to local music charities.

Wallace makes it clear that money has never been his motivation for the Archives.

“My take from it all is learning about new music and doing my part to help support it,” he said. “There’s a reason I name dropped so many artists. I support each and every one of them and they should all be remembered. Some of them you can still listen to, some of them you can’t, unless you are lucky enough to

still have their music, but at least there’s a place for them to be remembered. That’s my motivation.”

Check out the Oklahoma Music Archives (and musicians, upload your own info) at okmusicarchives.org, and follow them on social media for updates and regular posts spotlighting a different Oklahoma band or artist every day.