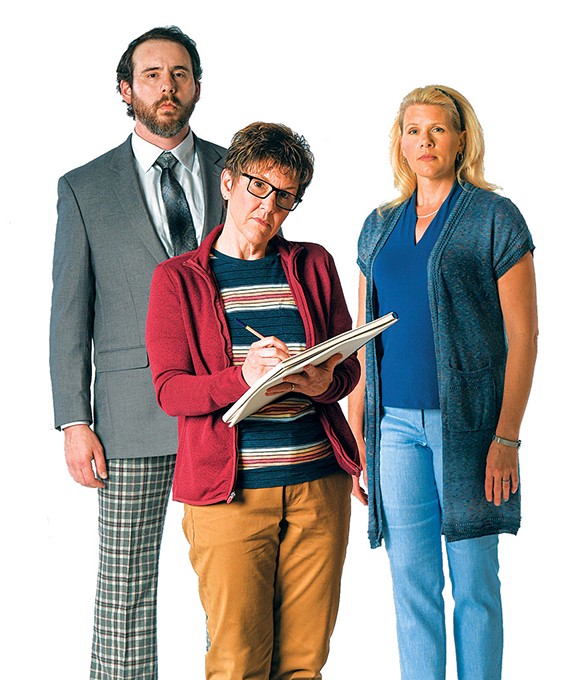 In the 21st century, a few musicals revisiting the past might be the key to the art form’s future. Lyric Theatre of Oklahoma producing artistic director Michael Baron said Fun Home, which begins its Oklahoma debut at Lyric on April 11, is one of a few recent productions that reimagine the classic genre to give it new relevancy in modern times.

“A musical like this comes along, like, once every decade,” Baron said. “Fun Home, Hamilton and Spring Awakening are the three that have really kind of forwarded the form.”

Baron, who recalls wanting to direct Fun Home for Lyric after he fell in love with “everything about it” while watching the production on Broadway in 2015, said the musical stands apart from its peers for several reasons. While Hamilton and Spring Awakening re-contextualize historical periods with anachronistic musical choices — a hip-hop retelling of Revolutionary War-era America and an alt-rock reimagining of late 19th-century Germany, respectively — Fun Home’s focus is more contemporary and more personal. Based on Alison Bechdel’s autobiographical graphic novel of the same name, the five-time Tony Award-winning production is more subtle than typical Broadway productions.

“I would call it a quieter musical in many ways, in that it leaves room for the scenes to breathe and behave like real human behavior,” Baron said. “When you see the show, the songs as well as the scenes, you feel like you’re watching a portrait of someone’s real life. The few moments in the show when it becomes a ‘musical’ in capital letters are essentially dream sequences.”

Fantasy sequences aside, Baron compares Fun Home to Tennessee Williams’ classic memory play The Glass Menagerie. Narrator Alison (played by Lyn Cramer) attempts to make sense of her troubled family history, recounting often painful memories starring Small Alison (Reese Freund) and Medium Alison (Taylor Yancey), which are reenacted for the audience. Bechdel, whose long-running comic strip Dykes to Watch Out For introduced readers to the conflicted and complex lives of several LGBT characters and their families, made The New York Times bestseller list in 2006 with her illustrated memoir examining the private lives of herself and her parents. Like the graphic novel, Baron said, the musical adaptation uses a familiar format to make otherwise uncomfortable observations and memories more palpable to the audience. 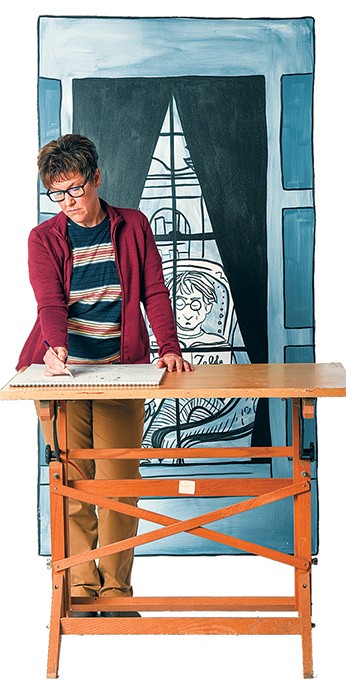 “She’s not just a cartoonist; she’s an artist, and she’s using that medium to tell her story,” Baron said. “And I think that’s why the book got such acclaim because it’s such a disarmingly safe way to tell a very unsafe story. And musical theater’s the same way. ... Fun Home’s really funny, the songs are really beautiful, but it serves a greater purpose in that it’s giving you a window to the human experience.”

Like all of Bechdel’s work, Fun Home is notable for its feminism and nuanced portrayal of gay characters.

“It’s a groundbreaking musical in that it’s the first musical that I know of that has been on Broadway where the main character is a lesbian,” Baron said. “It’s exciting that the women are front and center. … It’s also refreshing, too, because her father, who you find out very early on is a closeted gay man, is not at all compassionate or a character that’s inspiring. Usually when there’s a gay character — and I’m a gay man — usually when I see a gay character, he usually has a heart of gold, you just fall in love with him and it’s really refreshing to see a gay guy who is actually not that great and has damaged his family by being so secretive with his life.  … It’s a more complex portrayal of a gay person. Every gay person doesn’t struggle to come out and then everyone’s happy or dies of AIDS. There’s a lot of complexity to gay stories, and you see not only the complexity of her but her dad as well.”

Though Bechdel’s artwork is used sparingly in most productions, a casting decision Baron made led him to reconsider the play’s production design. Deciding Sandra Mae Frank, a deaf actress who also worked with Baron in Lyric’s 2016 production of Fiddler on the Roof, would be perfect for the role of Medium Alison’s college girlfriend Joan, Baron modified the play to incorporate American Sign Language (ASL) into her dialogue, which led him to seek a way to make the entire play more enjoyable for deaf audience members.

“The whole show takes place sort of on the pages of the book,” Baron said. “We’ve actually reproduced paintings from the book on the set. Except for older Alison, the narrator — she’s in full color — everyone else is wearing the color palette of the graphic novel. The piano and the coffin and the sofa, they’re all in the color palette of blues, blacks and grays. They’re outlined. Everything looks like you’re watching a graphic novel come to life on the stage visually.”

Subtitles for the signed dialogue between Joan and Medium Alison are projected on the wall behind them, also reminiscent of the look the graphic novel. Three shows will feature ASL interpretation for deaf audience members throughout. Though Fun Home’s story is extremely personal, Baron said, the musical is extremely accessible and its themes of self-discovery and coping with troubled family history and bittersweet memories are relatable to everyone.

“That’s why I think this show resonates so much with so many people,” Baron said, “because whether or not you have gay people in your family, every family, I believe, has some secrets that aren’t healthy. So everyone watching the musical, I think, identifies with what it’s like to grow up with the lies, whether big or small, that a family passes down.” 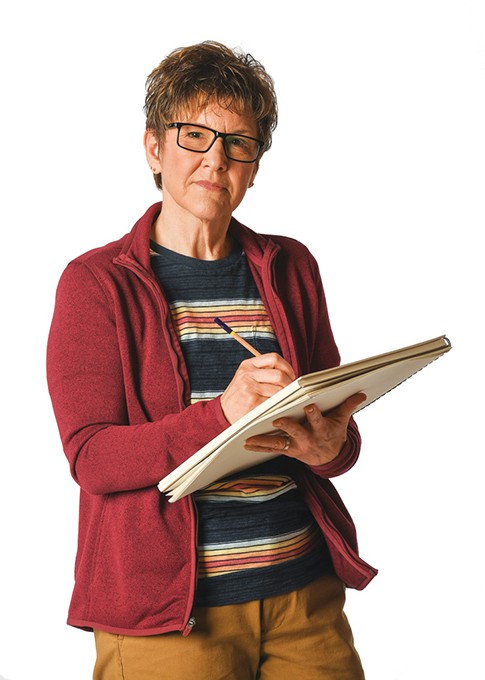