Anastasia Pittman did not ask for her Mother of Reconciliation label, but she certainly owned it.

Pittman was a longtime state representative for majority African-American District 99 in Oklahoma City before her 2014 election to the state senate for District 48. She reached her term limit at the end of the most recent legislative session.

She has also frequently put herself in the middle of Oklahoma’s most high-profile instances of racial insensitivity in the role of mediator. In August 2016, when a retired Elk City teacher presented a black colleague with a Ku Klux Klan hood during a CareerTech conference, Pittman met with him to talk about the situation and explain why some found it offensive. The teacher, Larry Long, offered the robe to his colleague, a friend, as part of an inside joke, but the audience was not in on it and was flabbergasted by the gesture. Long has since apologized.

Pittman was also a central figure in reaching out to University of Oklahoma fraternity member Levi Pettit after a video of him leading a racial slur-laden chant went viral. She wanted to do more than point out where Pettit went wrong. Pittman sought to educate and culturally expose Pettit in a way he had not experienced before. They are still in touch to this day.

“I went to his college graduation,” Pittman said. “We didn’t just bring him into our community and expose him to leaders of our community.”

Pittman, a Democrat currently running for lieutenant governor, has found that many cases of racial insensitivity stem from a lack of diversity education. For the same reason, she helped lead a push during her final legislative session to get Juneteenth — a holiday recognizing the emancipation of American slaves in 1863 — and expanded cultural education into school curriculums.

Juneteenth is officially observed each year on June 19, although the day on which it is celebrated can vary for convenience and to not conflict with Father’s Day.

While the Emancipation Proclamation was signed Jan. 1, 1863, news in the day did not spread quickly, and this was something slave owners would rather not have spread. Juneteenth marks the day the news finally spread to Texas, the last state to adhere to slavery’s abolition.

“They were free and still working under involuntary servitude,” Pittman said, “so when they got the news, they had a party.”

Juneteenth National Freedom Day was already officially recognized in Oklahoma before the most recent legislative session, but on the third Monday in June instead of on a Saturday, the day on which the holiday is most often celebrated.

At first, Pittman co-authored a bill with Rep. John Paul Jordan, R-Yukon, as an attempt to change the day on which the state observed Juneteenth. The bill had strong support and was approved by a House vote but never got a hearing on the Senate floor. The proposed change of date would have had a fiscal impact on the state, and while that impact was relatively small, it could not be justified as a priority during the same session in which teachers were fervently fighting for a pay raise and uptick in education funding.

But Pittman was not ready to give up on her attempts to increase Juneteenth’s visibility before her time in the Senate expired. She decided to take a different route, one that promoted real learning instead of an arbitrary change of date for a holiday many people are not aware of in the first place.

Pittman was able to add a friendly amendment to a bill by Sen. Gary Stanislawski, R-Tulsa, which directed the state Department of Education to add Juneteenth to the state’s social studies core curriculum.

The bill, with its Juneteenth amendment, was signed by Gov. Mary Fallin on May 8. Pittman sees it as a huge victory for cultural awareness in Oklahoma.

“If you don’t update the curriculum,” she said, “those who live outside of African-American communities are not going to come in for a celebration that they don’t know is happening.”

Pittman comes from a diverse heritage. She has one set of grandparents who were survivors of the Tulsa race riot of 1921 and another that came to Oklahoma on the Trail of Tears. She also has some Irish heritage.

The diversity in her own background is the backbone of her interest in making Oklahoma a rich mesh of cultures.

“I’ve had the best of exposure and the best of embracing who I am,” she said. “For a part of my destiny to be an elected official who can effect change — something that is perpetual and transcends all barriers and cultures — I’m very proud.” 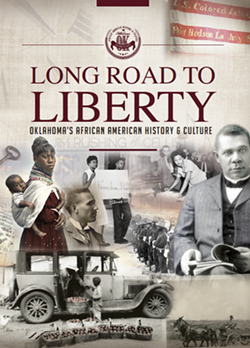 In 2007, Pittman got a letter from an Oklahoma teacher in a predominantly African-American school district. The teacher told Pittman that she was leaving the state for her native Arkansas, partly because Oklahoma lacked tools for teaching African-American students about their own history.

With the letter, the teacher also sent Pittman a copy of a free coloring book published by the state of Arkansas. The coloring book’s pages were full of significant African-American figures in Arkansas history.

Pittman, a former teacher, took the letter as a sobering alarm. She teamed up with Oklahoma Centennial Commission to develop a similar coloring book that would reflect the state’s rich African-American history. National civil rights leaders are known far and wide, but she knew that many significant African-American Oklahomans were anonymous even in their birth state.

“Nobody knows the contributions of these different members of our society,” she said.

The book, titled We Remember ... Before and Beyond, can be accessed on the Oklahoma Historical Society webpage okhistory.org by clicking on the For Kids tab and then the For Parents and Teachers section. Oklahomans included in the book include former State Supreme Court justice Juanita Kidd Stout and Joseph Jacob Simmons, Jr., who negotiated major oil contracts with African countries Liberia, Nigeria, Ghana and Kenya.

Part of the reason Pittman was confident about introducing Juneteenth studies into the state curriculum was that she helped put together another booklet, Long Road to Liberty: Oklahoma’s African American History and Culture, which could be used as a resource.

The book, developed in partnership between the Historical Society, Oklahoma Department of Tourism and others, can be ordered for free at travelok.com.

“It’s only fitting that now that we have some tools that can be utilized, let’s include them in curriculum so that teachers can be creative and be inclusive,” she said.

Some people might be reluctant to acknowledge Juneteenth because it is a reminder of a dark time in this nation’s history. Ameenah Fuller, a California-based activist working with Pittman on an upcoming oral history project for those who share African-American and Native American heritage, believes it would be a mistake to ignore the past.

“You can’t hide and mask history,” she said. “What you can do is learn from it.”

Fuller enthusiastically supports diversity education, particularly the local efforts in which Pittman is involved. She agrees with the former senator that a lack of education is at the root of most racial misunderstandings.

“That diversity curriculum should be taught across the nation — in the schools and even in the workplaces,” Fuller said. “I think that’s a major component of reconciliation that never happened, that no one was taught about diversity.”

By going back to embrace the history that Juneteenth represents, it opens up potential for a brighter future.

“Juneteenth is a part of celebrating the past, honoring our present and cultivating the future,” Pittman said. “We’ve got to do those things.”

Update 6/20/2018: An earlier version of this story incorrectly identified Larry Long as a retiring Metro Technology Centers teacher; Long is a retired teacher from Elk City, and the incident in question occurred at a CareerTech conference. We apologize for the error.