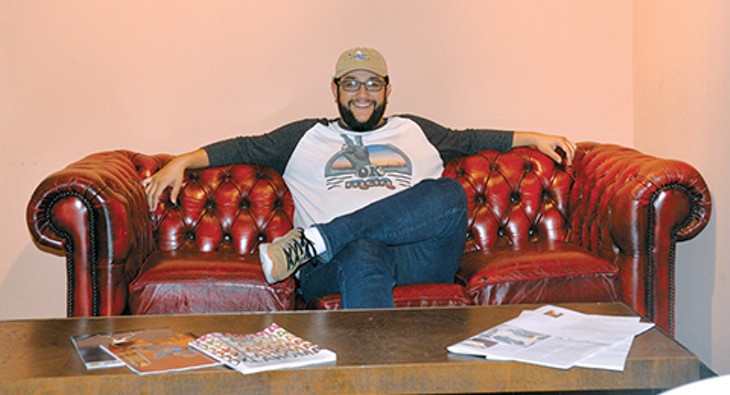 Every healthy, vibrant creative community needs its ground level — a gateway into live performance with little to no entry threshold where musicians, comedians and artists of all levels of experience can practice their craft and express themselves.

In Oklahoma City, that foundation is found at local open mic events around the metro area. In particular, the best place for beginners to flex their creative muscles or work their way through new material is the Public Access open mic, the city’s only all-ages open mic event.

While the event has welcomed performers of all types for years, there was a time earlier this year when its future appeared foggy.

Formerly held in 16th Street Plaza District at The Venue OKC, Public Access was without a home as recently as early June. For a while, host Alex Nicole Sanchez was unsure if or when he would find a new home for the event, but he secured a home recently at The Paseo Plunge, 3010 Paseo St., in The Paseo Arts District. Free signup begins 7 p.m. Sundays with performances starting around 7:30 p.m.

Sanchez, who is also a local standup comic, said finding a new home for Public Access was a huge deal for the significant population of performers who would rather not play another event somewhere that is not all-ages.

Before moving to The Venue, Public Access was formerly held inside the neighboring District House coffee shop. Sanchez said Paseo Plunge, which also houses Holey Rollers and Literati Press, reminds him of the layout that used to fit so well with the open mic’s format.

“I couldn’t be happier,” he said. “I love it because it’s the same setup. It’s tables along the right side, it’s chairs up here with the coffee table. It’s great.”

Sanchez said Public Access has grown into something separate from the local music and comedy communities. It is its own scene, and while there are no content restrictions, it is a wholesome and accepting environment open to people of all backgrounds. For some people, it is the place they feel the most free.

“It’s the one that’s for weirdos,” Sanchez said. “All the weird art kids like to come to this [open mic], and I’m proud of that. It’s fostered a real community.”

A first experience performing in front of a crowd at an open mic has all the makings of a terrifying experience. But Sanchez, who first tried his standup material out in front of the Public Access crowd in September 2014, found a place of comfort his first time behind the microphone.

“Everyone was really nice to me about it, so I kept coming,” he said. “That sort of became my home.”

Sanchez has always been comfortable as a performer, be it as a comic or a musician. He attended the Academy of Contemporary Music at the University of Central Oklahoma (ACM@UCO), which is where he met his late friend Will Ogletree, a fellow comic and musician who was Sanchez’s Open Access co-host before his death in summer 2017.

Sanchez always imagined himself ending up in comedy. His first open mic appearance actually felt more like a fulfillment of destiny than setting foot in unfamiliar territory.

“I’m comfortable on stage,” he said, “and even my first time, I was more comfortable doing comedy than I was doing music.”

Comedy and stand-up were a vital part of Sanchez’s upbringing. He was exposed to the work of many comedians through his father and always aspired to someday try his own material.

“My dad, he was a big comedy head,” Sanchez said. “My brother and I were kind of bred in a comedy dojo.”

Public Access existed in harmony with District House for several years, but when management changed, they were told to move into The Venue next door. Sanchez said the open mic was grandfathered into the space’s programming lineup and always felt out of place on the big stage.

In late April, The Venue’s management approached Sanchez and told him they were shifting their programming focus.

“They were like, ‘Hey, man, they’re making some changes. I don’t think we’re going to be able to do it,’” Sanchez said.

Management offered Public Access use of another space it owned, but Sanchez felt it would be better to find a new, cozier home closer to the environment that existed at District House.

“It was nice at The Venue,” he said. “I liked having a big stage, but it didn’t feel the same.”

After striking out with attempts to move the open mic to some other places, Sanchez was eventually approached by longtime Public Access attendee Michael Martin, whose father Charles Martin manages The Paseo Plunge. Michael asked Sanchez in late May if he thought The Plunge would be a good location, and the host loved the idea. Things moved quickly from there, and within a week, they had already set up their first show in the new location.

Martin began attending the open mic as a way of satisfying his itch for stand-up comedy. He had been working on some jokes but had nowhere to perform them — at least until he became aware of Public Access. He has since taken a break from his comedy work but still made a point to attend Public Access to watch the other performers.

Martin is happy the all-ages event has found a community-centric space to continue offering a platform to those who need it.

“Our goal really isn’t to make money,” Michael Martin said. “It’s to provide a space for anyone who’s weird and has an urge to perform to get five minutes to do whatever he or she wants. We’re going to try and keep this going for as long as we can.”

Sanchez hopes the event attracts many newcomers in its new location. He wants anyone with creative energy to be able to express it in an accepting environment. No one should feel limited by lack of opportunity.