Opening its second location, Off the Hook Seafood & More becomes the standard bearer for Oklahoma seafood

Husband-and-wife duo Corey and Loniesha Harris seem to have the Midas touch by cornering the market on an unlikely concept, making Oklahoma known for seafood.

The idea to start a food truck began during a friendship with an Oklahoma City Thunder player whom the Harrises met through a friend, but when the player got traded, the dream didn’t die.

“[Loniesha] is the one that said, ‘Why wait for somebody else? Let’s do it ourselves,” Corey Harris said with a laugh.

Off the Hook Seafood & More food truck was born in 2013 and became such a sensation at public events that its first permanent location opened at 125 W. Britton Road in 2015. The success of the restaurant was put to the test in a location that was built for a Starbucks and later became Vamonos Mexican Grill — neither of which lasted longer than a year, according to Harris.

“Again, it was my wife. I was content with the short hours of the food truck,” Harris said. “She said ‘We can do it’ and convinced me. … Everyone says that we’re the only thing that has survived (at the Britton location). It’s a good feeling. You’d think a Starbucks would’ve survived.” 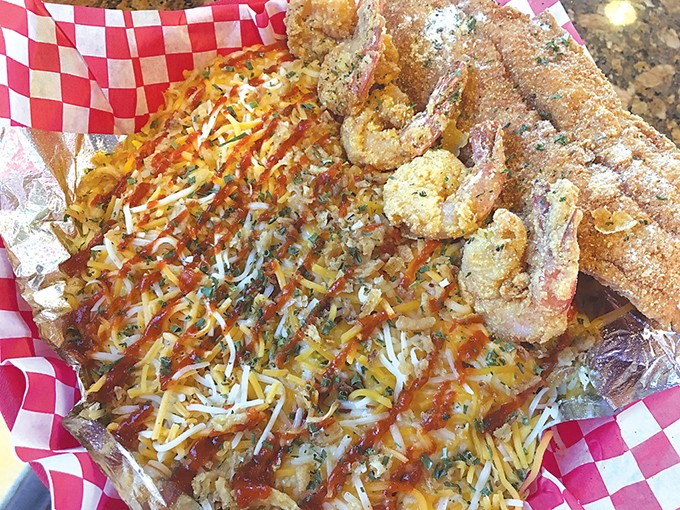 Off the Hook has something Starbucks doesn’t have: smothered seafood fries. Harris said he got the idea while working a catering event for a wedding, where he would often make a lobster sauce to be served over baked fish. After one event, he decided to dip some fries into leftover lobster sauce, and Off the Hook’s most popular dish was born.

Harris kicked up the sauce with shrimp, crawfish, lump crab and baby clams while adding cheese, bacon and onions for an indulgent topper. It’s a dish that would not exist if Harris was adhering to traditional Cajun food, and that’s what sets Off the Hook apart.

“My motto is that we’re a little bit of Cajun and a whole lot of amazing. I’m born and raised in Oklahoma. This is an Oklahoma thing,” he said. “I don’t like people to look at us as being a soul food restaurant. We have some soul-inspired dishes, but I don’t like being put in a box. I want people to enjoy it for what it is, which is off the hook.”

For my first trip to Off the Hook, I went to its original Britton location to find it packed even at 2 p.m. Its space as a former Starbucks means the building was designed with a drive-thru, and Harris adapted the menu to get to-go orders through the window, but don’t expect a traditional fast food expedition.

“We had to put up signs [saying] ‘We’re not fast food. We’re good food fast.’ People assume that we’re McDonald’s, but we’re cooking to-order; it’s not sitting under a lamp.”

The staff at the Britton location couldn’t have been more friendly or attentive, first asking if I had been there before and later genuinely checking on my meal after it arrived. I went with Off the Hook’s star — super smothered seafood ($15) — but opted for spicy rice rather than fries. The “super” version of the smothered seafood includes a fried tilapia filet and five shrimp. I was somewhat surprised because I expected the fish and shrimp to be covered in the lobster sauce in addition to the rice, but it arrived separate and freshly fried. The lobster sauce delivers on its mission to provide a hearty seafood-rich sauce that is accented by bacon and cheese. I’ve always thought of the combination of seafood and cheese as a faux pas, but it works in this case. I ordered a side of greens with smoked turkey. I like my greens to have some remnants of sweetness, usually from apple cider vinegar, but I realize that I might be in the minority. 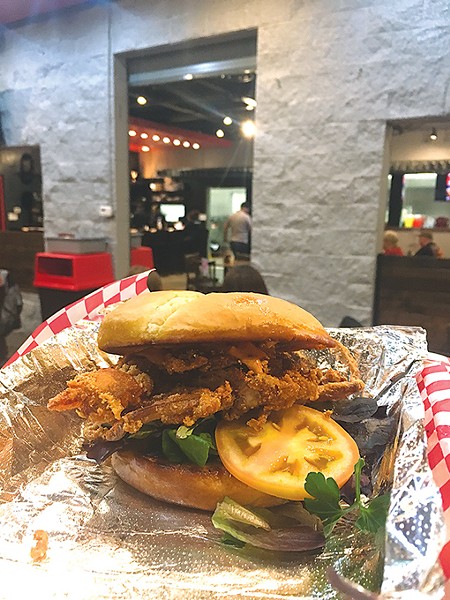 Off the Hook expanded to its second location, 1920 S. Meridian Ave., in the second half of 2017, but it is a different experience from its original location. With a full bar that includes 12 taps, frozen margaritas and wine (and soon liquor), the Meridian location is much more of a sit-down atmosphere. During the Saturday dinner rush, the restaurant was once again busy, and with good reason.

At the new location, Harris has added a few new items to the menu, including chicken wings and a salmon burger and brunch burger (Angus patty topped with smoked sausage, hash brown, cheese, bacon, fried egg and strawberry jam), both of which he said are top sellers.

I opted for the softshell crab sandwich because I consider softshell crab somewhat of a rarity, especially at an affordable $10. If the name doesn’t give it away, softshell crabs are removed from the water after a fresh molting to prevent a hardening of the shell. The crab is flash-fried and served whole on a bun with mixed greens, tomatoes and chipotle aioli.

“Wait; what did you order?” my dinner guest asked as I gleefully munched on my sandwich.

“You don’t see [softshell crabs on menus] because a lot of people don’t understand what it is,” Harris said. “We have so many people that when they order it, they don’t expect the whole crab.”

I also tried an order of Caribbean jerk-flavored wings (three for $6) and was more than pleasantly surprised. I would’ve liked a little more heat from a jerk sauce (one that traditionally uses Scotch bonnet peppers), but the wing is served whole, so three wings is actually like six when you don’t have to choose between drums and flats. Leaving the wing intact pays dividends in a juicy final product that is among the best wings I’ve had in the city.

The Harrises hope that they’ve opened two of what will one day be many Off the Hook locations, and I can absolutely see it happening. They’re offering unique products with good service in a way that will make Oklahomans proud.

What needs work: The greens could benefit from apple cider vinegar.

Tip: Don’t be afraid of the softshell crab.