It seems that nearly everyone who has spent at least a few years living in Oklahoma City has at some point gathered downtown with thousands of other revelers for Opening Night fireworks in Bicentennial Park.

Opening Night, the annual New Year’s Eve celebration organized by Arts Council Oklahoma City, enters its 32nd year Dec. 31. Depending on the weather, between 20,000 and 50,000 people are expected to attend the night of music, entertainment, food and, of course, the big midnight firework finale and ball-raising ceremony.

“It’s very dramatic,” Opening Night co-chair Carissa Stevens said. “This will be probably the highlight of the evening.”

While the fireworks display is free and open to the public (it is hard to charge for something that can be seen in the sky for miles), the night’s other planned entertainment and activities, which begin at 7 p.m., are only open to those who have purchased a wristband.

Wristbands are $8 in advance and $10 the night of the show and can be purchased in advance at Plenty Mercantile, Oklahoma City Museum of Art, Myriad Botanical Gardens and metro-area 7-Eleven and MidFirst Bank locations. Wristbands will also be sold in the lobbies of Civic Center Music Hall and Ronald J. Norick Downtown Library the night of the event.

Opening Night has become a tradition for many. This year’s festivities stick close to its tried-and-true formula for a good time, but with a few exciting twists.

This is the 10th year in which the Oklahoma City Thunder has hosted a home game on New Year’s Eve. To commemorate the occasion, the team has partnered with the arts council to bring in PixMob, a company that uses LED wristbands to project visual effects over a large crowd.

“Basically it turns every person in the crowd into a pixel, like an LCD TV,” said Opening Night co-chair Justin Newton. “They have a control center that can put images and lighting effects into the crowd.”

PixMob’s technology has been used in Super Bowl halftime performances, like during Bruno Mars’s set in 2014. Newton said the LED wristbands will also be active during the grand finale.

This year, Opening Night adds an eighth stage to its hub of downtown performance sites.

Neo-soul, R&B and hip-hop duo Adam & Kizzie are featured in Civic Center Music Hall’s Meinders Hall of Mirrors. The couple has received a lot of attention recently as a finalist for the international $1 million Megastar competition. The family-friendly act will also be joined in the area by the Bricktown Clowns of Oklahoma City clown troop.

Impromptu and hilarious OKC Improv performances — one of Opening Night’s most popular annual draws — will be found in Oklahoma City Museum of Art’s auditorium. Near the museum lobby, attendees can also hear music by Oklahoma Celtic band The House Session.

Leading up to the finale, people can enjoy music from The Wise Guys, an OKC institution of a cover band that has been around since the 1970s and plays everything from The Beach Boys to Maroon 5. 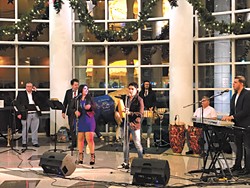 New Year’s is a holiday known for extravagant outfits, but those who stop by in the afternoon to check out the 2018 Opening Night Finale 5K, in which participants are encouraged to come in costume, should be prepared to see some added panache.

“Last year, we had someone who came in head-to-toe silver,” said arts council communications director Lindsey Pendleton, “like lamé shorts and a tank top and then their whole body was painted silver.”

The 5K event, now in its fifth year, has become somewhat of a tradition on its own.

“It’s still sort of in its younger years,” Pendleton said. “We keep building a good base for it each year. We keep increasing the numbers of runners, and we’ve been trying to keep it interesting by changing up the course and making sure that we offer a new and exciting experience for our runners each year.”

The 5K, which begins 3 p.m. on New Year’s Eve, has implemented a new course this year. Runners begin at Bicentennial Park and make their way south down N. Walker Avenue toward the Oklahoma River. The course circles back shortly after hitting the Oklahoma River Trail and comes back up Walker and to the starting point.

The race is a certified 5K and can be used by runners to qualify for other events. Advance registration can be done online at artscouncilokc.com/opening-night. Runner packets can be picked up at Red Coyote Running and Fitness and the first 250 entrants receive a free Opening Night tech running shirt.

In addition to the annual Festival of the Arts in April, Opening Night is one of the biggest events Arts Council Oklahoma City puts on each year. It takes a lot of work for the small staff to pull it off. Co-chairs Newton and Stevens are both volunteers.

“There are staffers that have been doing work here at the Arts Council since the spring,” Newton said.

Those interested in helping out with Opening Night festivities can find volunteer applications on the arts council website.

“It’s a super fun event to volunteer at because it’s high-energy and everyone’s having fun. Everyone wants to be there.”