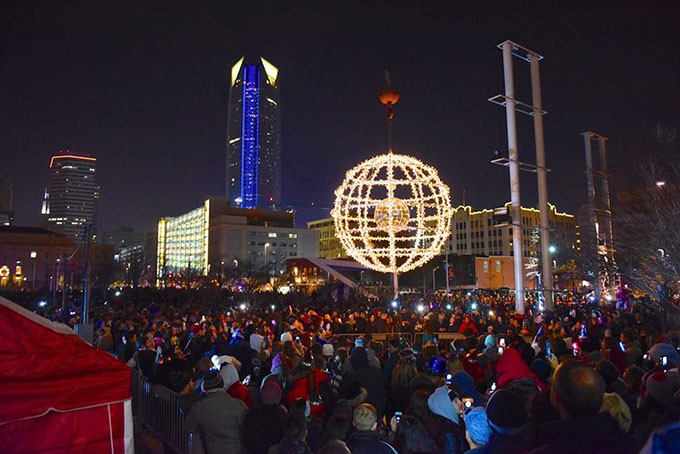 Since the late ’80s, Arts Council Oklahoma City’s annual Opening Night events have drawn tens of thousands of metro-area revelers to venues across downtown as they usher in the new year.

Each year, organizers add new elements that keep guests coming back. This year, it builds on its past success of featuring a variety of performing acts, including singer-songwriters, improv comedy, rap and hip-hop, Latin and jazz acts, along with food, youth activities and other events in venues spanning downtown, and ends with a countdown and fireworks extravaganza. The event runs 7 p.m.-midnight Dec. 31. Entry to Opening Night events are included with the purchase of a wristband, which costs $8-$10.

“We’re super excited to have Jabee,” said Opening Night and council projects director Katelyn Carter. “He’s had such an explosive year with the release of [his August 2016 album] Black Future and his show at The Criterion. He’s so good about working with us and with the community.”

Arts Council communications director Lindsey Pendleton said Opening Night has developed a bit of a reputation as being an exclusively family-friendly event. This showcase, she said, helps highlight the 31-year-old event that always offers something for every crowd and every generation.

“We try to be for all audiences,” Pendleton said. “We definitely do cater to families, but we cater to different age groups as well.”

Pendleton said Opening Night will have its own Snapchat filter available on-site during the event.

There are still many familiar favorites populating the expansive downtown festivities.

Michael King performs magic at City Hall, 200 N. Walker Ave. OKC Improv showcases its improvisational comedy in the museum auditorium. The performances largely revolve around audience suggestions and could be compared to the comedy on the television show Whose Line Is It Anyway?

A children’s area inside Meinders Hall of Mirrors at Civic Center Music Hall, 201 N. Walker Ave., features Bricktown Clowns with face-painting and balloon animal-making. A photographer will take group photos with props in front of a backdrop. Kids can also participate in a large, collaborative art project by adding decorations to a foam board that eventually will take on a life of its own.

“It’s like an interactive sculpture,” Pendleton said. “You can keep adding to it, and as the night goes on, it’s going to keep growing and growing.”

He said total attendance for the midnight spectacular is weather dependent. Organizers will sell 5,000-15,000 Opening Night wristbands, but as many as 75,000 have gathered downtown for the free display.

“It’s a lot of fun having the fireworks right there in Bicentennial Park,” Dolese said. “You’re surrounded by all those beautiful buildings, and it’s just awesome.”

Purchase $8 wristbands before the event at artscouncilokc.com or in person at Arts Council offices, Plenty Mercantile, Oklahoma City Museum of Art, 7-Eleven or MidFirst Bank. The price increases to $10 the day of the event, and tickets will be available at Civic Center Music Hall and the downtown library.

Before the sun sets and the party even gets rolling, though, Opening Night launches its annual Opening Night Finale 5K, beginning at 4 p.m. just east of Bicentennial Park. The USA Track & Field-certified, chip-timed course takes runners through downtown and the historic Heritage Hills neighborhood.

Everyone who finishes gets a completion medal. Top male and female finishers also receive an original windscape sculpture created by artist Dean Imel. The top three finishers in each category and the most festively dressed also receive prizes.

“We see a lot of elves show up in the evening,” Dolese said about costumed runners who also often wear their outfits to Opening Night events.

Visit artscouncilokc.com for a full schedule of events.