An updated stage production of The Phantom of the Opera includes more spectacle than was possible when the musical debuted.

Like the disfigured sewer-dwelling organist it’s named for, Andrew Lloyd Webber’s The Phantom of the Opera helped mold the career of a young performer bewitched by the possibilities of a life onstage. Eva Tavares, who plays Christine in the touring production of Phantom scheduled to run Jan. 9-20 at Civic Center Music Hall, 201 N. Walker Ave., said seeing the show for the first time at the age of 10 helped her realize she wanted to star in musicals.

“At the time, I was a dancer,” Tavares said. “I hadn’t started singing yet, but I knew that I could sing because I loved singing around the house, and my grandmother was actually an opera singer, so she was always encouraging me to sing. [Phantom] was really the combination of all of these different art forms. There was dance; there was singing; there was the production value. It was such a spectacle. I was just kind of taken with the grandeur of it all.”

Hoping to become part of such grand spectacles, Tavares began performing with Vancouver Opera’s children’s chorus as a teenager.

“That was the first time I had been in something of that scale, with all the different moving parts and the huge sets and the stars that were coming in, doing these roles,” Tavares said. “It was intoxicating, really.”

In 2017, Tavares was cast as Christine, the chorus girl who becomes the Paris Opera’s lead soprano thanks to singing lessons from the Angel of Music, aka the Phantom, who also advances his pupil’s career through intimidation and violence. A stagehand is found hanging from the rafters; a chandelier famously falls. Tavares said modern methods have only made the show’s spectacle more spectacular than when she first saw it as a child.

“When the show was created 30 years ago, they had a certain set of tools that they were able to use as far as technology goes,” Tavares said. “Now we have just so much more to play with. You’re going to see some new set pieces. You’re going to see a lot more fire and some special effects that weren’t present in the original, but it’s also important to know that the same things that you love about the brilliant original are still there. The story, the characters, the music, the costumes, the stuff that you remember as iconic, that’s still present, just in an updated, more amped-up way.”

Pyrotechnics and other special effects make the production’s action scenes seem like they have higher stakes, Tavares said, but the actors onstage aren’t taking any real physical risks.

“I personally love the kind of dangerous aspect that it brings to it, although it’s very, very safe from our end,” Tavares said. “I mean, we have people on the show that are really just there to make sure we feel safe and comfortable onstage; especially with stuff like fire going off, you want to make sure that’s the top priority. So I’ve never felt unsafe, but I know from the audience’s perspective, there’s definitely the wow factor.” 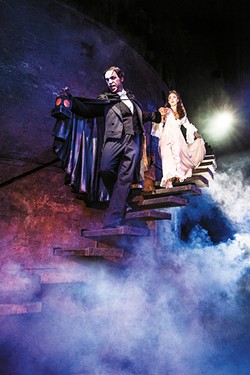 The exhilaration she felt in the audience at age 10 still remains, but as an adult, Tavares said she has more appreciation for the “complexity of the relationships” between the Phantom, Christine and her fiancé Raoul, who seeks to rid the opera of its half-masked menace by any means necessary.

“I think when I was a kid,” Tavares said, “I probably would have said, ‘Oh, Christine should be with Raoul. He’s the one that’s loving and caring and all of those things,’ but now, looking at it as an adult, I don’t think I would trust Raoul, given his conduct throughout the show, and also, that relationship with Phantom is more complex than it might seem on the surface, when I was a child.”

After Tavares was cast in the role, she began studying the complicated inner angles of this volatile triangle to try to figure out the motivations behind Christine’s choices.

“That was the biggest thing, picking apart those relationships,” Tavares said, “really trying to understand her reasoning behind her decisions. And making sure, as well, that she wasn’t a victim, that she was making her own choices. … I just feel that she has to be a strong female character that she doesn’t have to be someone that’s just pushed around by these other people around her, but that she, over the course of the show, develops a lot of her own independence and strength so that by the end, she’s found another part of herself where she’s able to fight back and able to stand her ground in the face of someone who is very combative and hostile.”

While Christine might not always be represented as strong and independent in the myriad adaptations of Phantom that have haunted stages, screens, radios, pinball machines and metal albums since Gaston Leroux first published the novel in 1910, Tavares said the production currently touring North America has updated more than just the special effects.

“Our director definitely encouraged us to try to portray these characters as really grounded and human without any kind of magic elements, so having them really be real people going through real things, and it makes it grittier, for sure,” Tavares said. “I think it’s definitely a different take on it.”

When Webber and Cameron Mackintosh debuted their musical take on the story in 1986, versions of the Phantom had already been portrayed by Lon Chaney, Claude Rains and William Finley, and since then, the likes of Robert “Freddy Krueger” Englund and even the Jack Russell terrier on the children’s show Wishbone have starred in variations of the story. Tavares said she didn’t draw inspiration for her version of Christine from any specific predecessor but felt that the sheer number of adaptations of the story meant she, too, could create her own version of her character.

“I try not to emulate anyone else,” Tavares said,” but the fact that so many other people have taken the show and done what they felt like they needed to do with it, that gives me the freedom to do the same.”

Tavares’ first performance in the production was in Vancouver, in the same theater where she first saw Phantom as a child.

“That was a bizarre week because I got to have my whole family and all my friends from high school and my music teachers and everyone else out there, which was such a gift,” Tavares said.

And she loves to see excited children, who might find inspiration of their own, in the audience.

“We’re always at the stage door, saying hello to everyone, and we get lots of kids out,” Tavares said. “I also get a lot of Instagram messages from parents, as well. It’s amazing how much of an inspiration it is to all different ages, really.”

The Phantom of the Opera