Oklahoma’s lawsuit against Johnson & Johnson rightly argues that their cure is often worse than the disease. 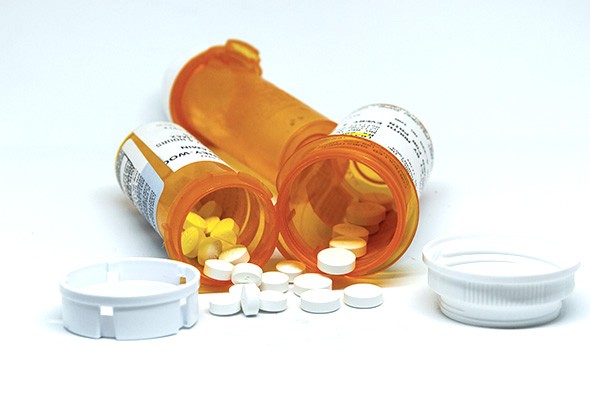 At age 19, I was just one year into my military service when I was tasked, along with about a dozen guys my age, with pulling all of the food supplies off the USS Midway (CV-41) and restocking them onboard the ancient troop carrier from the 1930s that we would live on while the Midway was in dry dock. This task usually involved everyone getting in line with about 8 feet separating us from one another, and furiously tossing 60-pound bags of flour, rice and sugar down the line. I got super-ripped that summer, but not in the way I wanted.

Somewhere along the line, I caught or threw one of these bags the wrong way, and the shooting pain in my lower back bent me into the shape of a question mark. One of my shipmates pushed me into a taxi that spirited me to the base hospital, where I was prescribed painkillers and five days of bed rest. During that time, I became a source of cheap entertainment for members of my division, who would visit my bunk just to hear the streams of opioid-induced gibberish I spewed.

For the next 15 years, I would periodically throw out my back — sometimes from exertion, sometimes because I sat wrong or took a strange step — but with the right kind of exercise, it always snapped back into place.

But that was before an 85-pound black Labrador retriever entered the picture.

In October 2001, I was washing said monster on my deck. Being one of a small percentage of Labs that hate water, Hannah almost had to be pinned, wrestling-style, for baths. And in the process of executing the move, my back went out the same way it had 15 years before and it would not go back into place. What followed was a surgical procedure to shave off the part of one of my disks that was impinging on my sciatic nerve. I also received a ton of painkillers. During my two-week recovery period, I called into my editorial meetings and, like my fellow sailors before, Oklahoma Gazette got a lot of laughs out of my attempts to put words together.

Since, I have only had one surgery, and it was for something unrelated to my back but far more painful, and the recovery time was much longer. I was put on opiates again while one of my primary jobs was to write film reviews for The Oklahoman. So there is a window of about two months in the late ’00s when I gave considerable praise to some movies that never should have been made.

These three incidents were pivotal in my life. I hated what the drugs did to me, so whenever I was prescribed opioids for any reason, I simply did not take them.

I never got addicted to opioids thanks to my considerable control issues, but millions of people go through something similar and, for all purposes, prescribed opiates end the active and productive period of their lives. And with the arrival of new synthetics like oxycodone and a profit motive by pharmaceutical manufacturers to promote their prescription, more people’s lives were sent into free fall.

Currently, the state of Oklahoma is embroiled in a lawsuit against Johnson & Johnson, a corporation that makes Johnson’s Baby Shampoo but also drugs that, beyond providing necessary relief for some conditions, can ruin otherwise happy lives. These pharmaceuticals are so addictive that when doctors inevitably cut off their supply to patients, those pain sufferers desperately turn to illegal street drugs.

The lawsuit is making national headlines because Oklahoma is sort of the test case, the canary in the coal mine for states moving to address a public health crisis through the courts. But we are also in the position of having passed, a year ago this month, the most progressive medical cannabis legislation in the country, providing a non-addictive alternative to opioids for pain sufferers. Our state is not always in the habit of doing the right thing, but passage of State Question 788 prior to Oklahoma attorney general Mike Hunter taking on Johnson & Johnson was almost unique in its positive potential outcomes.

Since medical cannabis licensing went into effect last year, Oklahoma Gazette has devoted significant space every week to covering this formerly demonized medicine that, according to recent figures from Oklahoma Medical Marijuana Authority (OMMA), is now providing real relief to over 129,000 patients. We did not enter into this lightly or with an opportunistic spirit. Like most of our readers, the majority of us know someone who has struggled with opiates. Anything that can provide a viable alternative to highly addictive substances with potentially disastrous consequences is an absolute net-plus for us.

According to a recent study by New Frontier Data, pharmaceutical companies would stand to lose $18.5 billion if all 50 U.S. states were to legalize medical cannabis. Naturally, these same companies are pouring considerable assets into fighting such widespread legalization.

“To them, it’s competition for chronic pain, and that’s outrageous because we don’t have the crisis in people who take marijuana for chronic pain having overdose issues,” U.S. Sen. Kirsten Gillibrand, D-New York, told Forbes in 2018. “It’s not the same thing. It’s not as highly addictive as opioids are. … What I see is the opioid industry and the drug companies that manufacture it, some of them in particular, are just trying to sell more drugs that addict patients and addict people across this country.”

The recent settlements between Oklahoma and two pharmaceutical companies, Purdue Pharma LP and Teva Pharmaceutical Industries Ltd., lend credence to Gillibrand’s claims. I do not know if medical cannabis could have helped me when my back went out years ago, but I am glad that my fellow Oklahomans now have better options if hard labor or dog-wrestling exposes them to possibly life-destroying medication.