OKC Broadway brings a story of personal growth, determination and pie to the stage in Waitress. 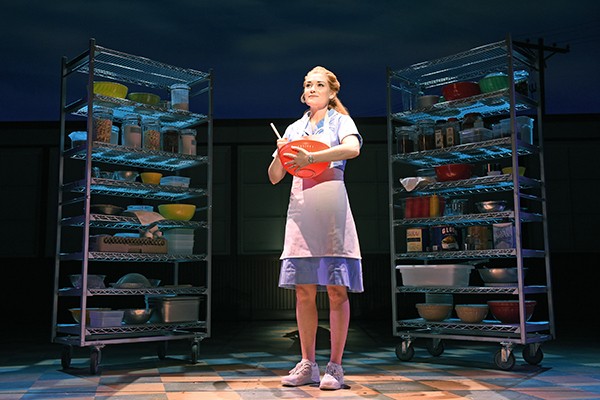 Dough is a malleable culmination of a few different things and a lot of elbow grease, just like life. It is also, of course, another word for money. For Jenna, the protagonist of the musical Waitress, dough is both livelihood and life, the starting point of the pies that she makes every day that also remake her life.

Waitress comes to Civic Center Music Hall, 201 N. Walker Ave., courtesy of OKC Broadway Tuesday-March 24. Tickets are $27-$96, available at okcbroadway.com.
Based on Adrienne Shelly’s 2007 film of the same name, Waitress follows Jenna as she navigates her job waitressing and baking pies at Joe’s Diner while she endures a difficult and abusive marriage to her husband, Earl. All of this is further complicated by a positive pregnancy test.

As Jenna contemplates her unwanted pregnancy, she connects with Dr. Jim Pomatter and contemplates what she truly wants from her life. Jenna and fellow waitresses Dawn and Becky forge a sense of community as they experience the highs and lows of love and life, navigating motherhood and career.

Christine Dwyer, who plays Jenna, said she loved the film version — and Keri Russell’s portrayal of Jenna — when it came out. After graduating with a bachelor of fine arts in musical theater from Hartt School at University of Hartford, Dwyer went on to star as Maureen in the national tour of Rent. She would later work her way up from ensemble to the role of Elphaba in the national tour of Wicked, a role she would also play on Broadway. Dwyer toured with the show Finding Neverland, which was directed by Waitress director Diane Paulus.

Dwyer described how the show’s major themes resonated with her and continue to do so with audiences across the country.

“It spoke to me; the story of friendship and just the idea of three women coming together and all struggling with real-life issues and helping each other,” Dwyer said, describing Jenna’s struggle as one of figuring out how to get out of challenging situations.

For Dwyer, Waitress realistically portrays the struggles that women face, but it avoids determinism and promotes the possibilities for change. Waitress is also the product of a creative team featuring four women.

“[Jenna] is not stuck anywhere, and I think that’s such an important story to tell,” Dwyer said, “because I think no matter who you are, all of us feel like at some point in our lives, we’ve made the decision, we’ve gone on this road and that’s what our life is going to be. In our musical, we really bring forth the possibility that you can change your circumstances. … It takes a lot of strength to do it; it takes friendship and help from your community, but you can change your situation.” 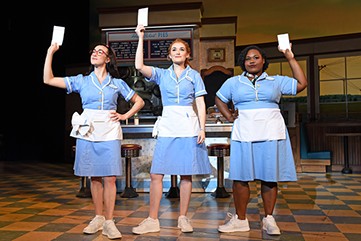 The show’s powerful representation of female-driven determination and persistence also challenges many dominant narratives present in contemporary musical theater, Dwyer said. Instead of being a “cookie-cutter” love story that flattens female characters into love objects, Waitress represents for Dwyer a story of “personal growth and triumph.” She said the role’s introspection has extended beyond the stage and beyond her six-month portrayal of the role thus far.

“I’ve never felt more connected to a part,” Dwyer said. “I’ve never enjoyed playing a part more than this one. This part truly has helped me see myself in a better way in my day-to-day life. That’s what you want art to do. … It’s been a very unique challenge but also the most rewarding one that I’ve ever had.”

Part of that unique challenge is that, as Jenna, Dwyer is in virtually every scene.

“Once I’m onstage, which is the top of the show, I kind of never leave,” Dwyer said. “There’s no time to think about anything else other than being Jenna in this musical. … I’m in every single number, and if I’m not in a number, I’m changing into a pregnancy belly and then running onstage.”

Dwyer described the show as a “marathon” in the physical sense, but also in its emotional toll. Although the show features plenty of heart and humor, its depictions of sadness and struggle are also rife.

“I think it forces you to go inside yourself and dig deep and connect to the heartbreak of what Jenna is going through,” she said. “We’ve all been through something similar — maybe not an unwanted pregnancy, but something that you feel like is holding you back from really blossoming into the person you could become. And that, I think, is something that everyone can connect to.”

Another way in which Waitress highlights its emotional power is through music. The show’s songs, featuring music and lyrics by pop singer Sara Bareilles of “Love Song” and “Brave” fame, reinforce and subtly expand the show’s musical capacities. Bareilles has also portrayed the role of Jenna on the Broadway stage.

Dwyer described the emotional valence of Bareilles’ “story-songs,” pointing to her lyrical strength and emotive power as forces that easily blend into the musical theater context and evoke the cinematic nature of the show’s origins.

“The show starts and it feels very much like one pop song that is a story, and it’s just really interesting and cool to be a part of something that’s so different,” Dwyer said. “It is still a musical and there are still big production numbers, but the feel of her music just makes it play more like a movie.”

The Waitress narrative variously incarnated on film, on the stage and through pop music represents a democratized and accessible story of resilience, one that Dwyer said is a joy to bring to audiences across the country as part of the show’s tour.

“Even if you are not a musical theater fan and you don’t go to a lot of musicals, everyone who comes to this show loves it and connects to it,” Dwyer said. “It’s not a big, flashy musical; it’s like a slice of life. You’re dropped into somebody else’s day and watching their struggles and their triumphs unfold in front of your eyes.”

She said the show’s magic became clear to her the first time she saw it performed.

“I came out of the theater feeling so much better and so much stronger,” Dwyer said. “We have such a great cast and a great company of people telling the story. I think everybody will be a happier person when they leave the theater, seeing the show, and ready to conquer their own struggles.”