OKG explores literary legends with lesser-known local roots from Oklahoma’s past and present. 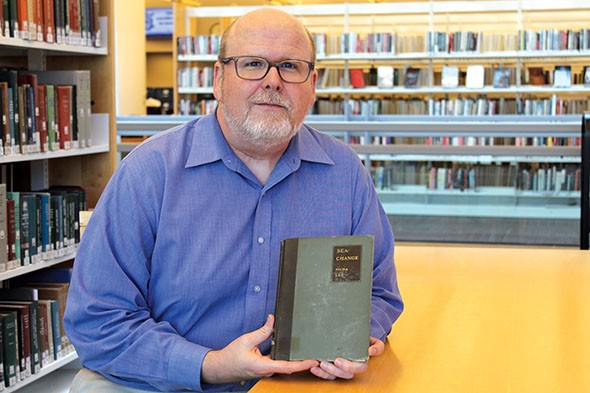 Did you know that an Okie from Muskogee currently reigns as America’s premiere sly and comedic history writer? Or that a seminal novelist in neo-crime noir was born and bred in Anadarko up until his father fled his post as sheriff amid embezzlement charges? Such is the far-flung and colorful nature of an array of writers such as Sarah Vowell (Lafayette and the Somewhat United States, Unfamiliar Fishes) and Jim Thompson (The Grifters, The Killer Inside Me), who found acclaim internationally but whose roots in Oklahoma are often overlooked.

It’s not that Oklahoma doesn’t have its own informal literary canon including S.E. Hinton’s The Outsiders, a formative novel for countless disenchanted teens across the world, as well as the late-coming adoption of Ralph Ellison’s monumental achievement, Invisible Man. But other important voices such as Roxanne Dunbar-Ortiz (Loaded) and Pulitzer Prize-winner John Berryman (The Dream Songs) have, so far, not received their Okie bona fides.

Muna Lee is a particular blind spot in that canon, according to Larry “Buddy” Johnson, special collections manager of Metropolitan Library System. As Oklahoma was still finding its footing in the early 20th century, Lee became a fiery voice in poetry and civil rights.

“I’ve always been intrigued by her life as a radical feminist poet, as she produced some very beautiful lyric poetry,” Johnson wrote in an email exchange with Oklahoma Gazette. “She’s truly unheard of today, but in the World War I era, she became the favorite of critic H. L. Mencken and published numerous poems in various New York magazines.”

A Google search of Lee turned up a few bone-dry academic papers and brief nods by universities such as Ole Miss that only grudgingly acknowledged her significant time spent in Oklahoma both in childhood and as a teacher. There’s also an archive of her contributions to The New Yorker with the posts dated to the 1930s as if Lee had been clacking away on a typewriter plugged into an early version of the blogosphere mostly consisting of creaky cogs, a repurposed sewing machine pedal and a sprawling web-work of pneumatic tubes.

“Here is this furloughed school teacher working in a grocery store in Oklahoma City who becomes the darling of The Smart Set, holding her own with Pound and Eliot and writing searing feminist poetry,” Johnson wrote. “At some point, she taught herself Spanish and began writing in Spanish, becoming one of the most noted female Latin American voices. From there, she essentially lived the life of the Lost Generation, moving to New York and having a relationship with a Puerto Rican nationalist poet. I don’t know; I guess I just adore her on some emotional level, like a kinship. Historians are prone to that.”

“Oklahomans have largely been future-oriented, probably because much of the state was founded by boomers and boosters and the next big thing is always around the corner.” — Larry “Buddy” Johnson tweet this

“You have a writer like J. David Osborne who sets all these stories in Lawton,” said World Literature Today book review editor Rob Vollmar of the former Okie now living in Texas, where he runs Broken River Books. “Especially for people outside Oklahoma that read those books, he is doing for Lawton what Breaking Bad did for Arizona. His work is descriptive of how poor folk get by, but then added in is are all these dark, weird, otherworldly space monsters.”

Vollmar is also an Eisner-nominated writer whose Bluesman graphic novel is an ambitious concept piece with a story paced to a traditional blues song, which follows two African-American musicians pursued across the countryside for a crime they didn’t commit.

“Bluesman has an interesting connection because, though it’s set in Arkansas, they came from Oklahoma,” Vollmar said. “When you are writing these characters, they have these entire lives that came before they are introduced in the story. These two were traveling the circuit that passed through these black independent towns like Langston.”

Oklahoma History Center’s website recounted the unique presence of all-black towns, stating that never before in history “did so many African-American men and women come together to create, occupy, and govern their own commnities. From 1865 to 1920 African-Americans created more than 50 identifiable towns and settlements, some of short duration and some still existing at the beginning of the 21st century.”

Though the state’s past is fertile ground for writers, so is the future. Oklahoma has been regularly placed at or near the center of science-fiction universes at a surprising pace given how far Oklahoma is from the center of any actual universe, whether literal or metaphorical. As Brian Berlin rang up customers at New World Comics, 6219 N. Meridian Ave., he rattled off a burst of references such as Thor’s run set in Broxton and Doc Samson’s origins in Guthrie. Captain Marvel even visited the Oklahoma City Zoo in a comic, as any self-respecting superhero should when zipping through Middle America.

Tulsa’s Sterling Gates has become a regular contributor to the expanding DC Universe including work on numerous comic runs as well as writing stints for the Supergirl and Flash television adaptations. Robopocalypse by another Tulsa native, Daniel H. Wilson, looked forward to a global throw down between man and machine. Then there is aisle after aisle of local sci-fi writers at pop-culture conventions across the region promoting titles that feature Oklahoma prominently in their theoretical, often dystopian, futures.

“Oklahomans have largely been future-oriented, probably because much of the state was founded by boomers and boosters and the next big thing is always around the corner,” Johnson wrote. “That makes it much easier to create these other worlds and dystopian societies. I think it also could be what S. E. Hinton always said. She said (paraphrasing) she never ran out of things to write about because Oklahoma is such a weird place full of unusual people who believe the strangest things.”