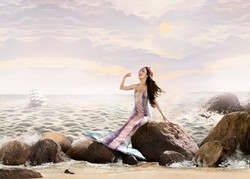 Robert Mills is not afraid to admit that the idea for staging a ballet around the story of The Little Mermaid was one motivated by a need to sell tickets. But instead of dumbing down a production to fit the story’s broad Disney appeal, the Oklahoma City Ballet artistic director has developed a show that could go down as the company’s most elaborate original production in recent memory.

“When you look at what I’ve done,” Mills said, “I’ve been very conscious to create a sophisticated, elevated ballet.”

Mills is not bragging or being heroic. The world-premiere ballet not only received original choreography from the artistic director, but musical arrangement as well. He was involved in putting together nearly every detail of the production.

Those hoping to see The Little Mermaid have just three shows to do so. The production runs 8 p.m. Friday-Saturday and 2 p.m. Sunday at Civic Center Music Hall, 201 N. Walker Ave. Admission is $15-$65.

OKC Ballet principal dancer Miki Kawamura, in her eight years with the company, has never seen anything like Mills’ version of The Little Mermaid.

“This is the first ballet where I don’t touch the floor most of the time,” she said.

To simulate underwater movement, Kawamura’s Ariel character (the story’s mermaid protagonist), dances on and is lifted by four male dancers, never touching the ground. In another scene, characters dance barefoot in an elevated trough of water on the stage. The underwater backdrops are actually moving projections shot onto the stage.

OKC Ballet is borrowing its costumes for the show from Charlotte Ballet in North Carolina. Charlotte Ballet put on its own version of A Little Mermaid, though Mills said it has little in common with the version he wrote.

“Trust me, [borrowing] is harder than putting together a piece working with a scenic designer and a costume designer,” he said. “This was me trying to put my round peg in a square hole of a production because we’re not doing it anything like they did.”

There are some dancers in the show who are cast simply as waves and dance on stage trailed by long sheets of silk. Mills enjoys seeing his creative vision come to life, particularly considering how different it is from what OKC Ballet would normally do.

“I’m versed enough in making bodies move,” he said. “When it becomes 60-foot-long pieces of fabric and silk and boats and crabs and seahorses and how someone is going to dance when they’re underwater and never touch the ground, these are things that really aren’t explored much in what we do.”

Though The Little Mermaid has become a passion project for Mills, it began more than a year ago as a personal chore.

“It’s not something that I really wanted to do,” he said. “They brought it to me as an idea.”

In April, OKC Ballet presents a triple bill of contemporary performances headlined by a company-premiere production of legendary Czech choreographer Ji?í Kylián’s Petite Mort. For Mills, and likely many of the OKC Ballet dancers, the chance to perform a contemporary production is exciting and artistically fulfilling. But artistic fulfillment does not always pay the bills.

“I have a responsibility to not just do Kylián, but to keep people employed,” Mills said. “It becomes a balance between elevated, sophisticated works of art and something that will sell.”

“Families will be able to come to this, and kids will enjoy it,” he said. “It’s colorful, it’s fast-paced, it’s scenic.” 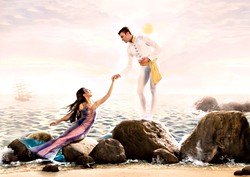 The choreography that exists in Mills’ version of The Little Mermaid is not only new and different for the company, but unique from what most companies around the country would attempt.

“For the female character, there’s really nothing like this that exists in ballet,” he said.

Before rehearsals began, Mills told Kawamura that she needed to make sure her core is exceptionally strong to withstand being suspended from her arms and legs. He told the male dancers supporting her to focus on their shoulders and joints.

Jonathan Batista, a principal dancer in his first season with OKC Ballet, said while there are plenty of technical challenges with the show’s choreography, the bigger obstacle is making sure the story is cohesive.

“What’s really important is how to present the story,” Batista said. “We’ve been rehearsing quite a lot and been very focused on telling the story.”

Batista plays the prince who discovers Ariel on the beach. In that scene, he has to convey some “I’ve never seen such a creature” astonishment without words. Because this is a world-premiere ballet, there are not necessarily any existing guidelines for effectively progressing the plot. Batista and the other dancers are working together with Mills to forge their own path.

Kawamura said all the work has more than paid off. She tries to impress on others that The Little Mermaid is a show that appeals to all ages.

“I tell everyone, ‘You will love this show,’” she said.

Through his work on the production, Mills has slowly been able to draw parallels between the story and his own experiences. The artistic director feels like he has come to a point in his life and career where he is able to breathe fresh air again after a period of struggle.

“The Little Mermaid has gone from something I didn’t want to do to something that has been really fun,” Mills said. “I’m doing it to the point where I feel like I’m coming up from drowning.”