Located at 603 NW 28th St., on the lower level of the new Pueblo development, is OSO, which is positioning itself as a craft cocktail-forward designer taqueria from Humankind Hospitality, which includes owner Shaun Fiaccone (Picasso Café, The Other Room and upcoming Frida) and culinary director Ryan Parrott.

OSO is set to open at the end of October or early November.

The Paseo’s dynamic duo adds executive chef Chris McKenna (Packard’s New American Kitchen, HunnyBunny Biscuit Co.) and cocktail consultant Jeff Cole to round out the menu, which has been going through a series of tastings since spring, and the biggest question has been What kind of tortilla will be used as a vehicle for its 13 different types of tacos?

“Chris McKenna was making them at home, and it spoiled us,” Parrott said. “We didn’t have room here to process them. It wasn’t going to be feasible. Found a place in California and [we’re] bringing in their tortillas. It’s as close to actually pounding them out yourself.”

OSO will serve its tacos on corn tortillas made with stone-ground heirloom white corn that is made without lard, so it’s vegan-friendly, but there are also flour tortillas upon request. The final product is a sturdy tortilla that holds up to a pile of toppings with just one layer.

“It is a unique tortilla and different than buying them at the grocery store,” Parrott said.

“I’m not a vegan or vegetarian, but if I was going to come in here and sit down, I would be drawn to the vegetarian offerings just because of the flavors on them.” — Ryan Parrott tweet this

“The burnt ends come from a smokehouse in Kansas City,” Parrott said. “It was an ode to Oklahoma with a fried pickle on it and some of it was a little by accident. I didn’t think it was going to be quite as good as it is, but it surprised me how great the flavors came together.”

Building off Picasso Cafe’s large vegetarian menu, OSO has a wide selection of vegetarian tacos that Parrott said is likely to expand in the coming months.

A mushroom taco combines roasted corn, Cotija cheese, salsa roja and radish. A sweet potato taco is topped with black beans, crispy kale and avocado and a nopales taco comes with tomato, avocado, pickled onion and Cotija. Parrott was most excited to show off the cauliflower picadillo, which is a vegetarian take on the Cuban version of picadillo, which combines ground beef or steak with raisins, olives and onions.

“The way people might read it with green olives, golden raisins and pepitas, it might be a little strange-sounding to people, but the flavors will meld together,” Parrott said. “It is the umami quest where you have the sweet and salty together. It’ll be fun for people that don’t eat meat. I’m not a vegan or vegetarian, but if I was going to come in here and sit down, I would be drawn to the vegetarian offerings just because of the flavors on them.” 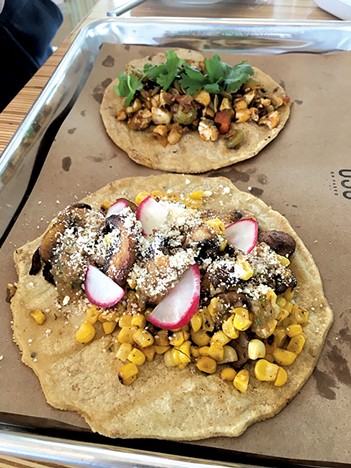 Tacos dominate the menu, but there are plenty of other options, including appetizers of ahi tuna tostadas, shareable creamy street corn topped with crispy Takis and tater tots covered in cheese, bacon, avocado créma and a sunny-side egg.

A taco salad arrives in a huge, freshly fried taco shell and features house-made Catalina dressing. There are two burritos on the menu in addition to nachos and quesadillas, and the only enchiladas on the menu are vegan.

“The world is shifting more to that direction,” Parrott said of the vegan enchiladas.  “Everyone is kind of leaning towards less animal products and being cognizant of what they’re eating. People should know that whether they are vegan, vegetarian, or whatever dietary restrictions you have, you can come here and feel safe with what you’re getting.”

The opening of OSO is somewhat of a serendipitous turn for Fiaccone, who has been mired in the process to open Frida, another Paseo restaurant that will hit the five-year mark when it finally opens next March or April. When he originally conceptualized Frida, it was going to be a Mexican restaurant, but during the intervening years, similar concepts have opened in the city.

“[Frida is] now the concept it should’ve always been, which is New American Southwest, and is more of a high-end restaurant,” Fiaccone said. “I’ve always wanted to do a taqueria. I’m from the south side [of Oklahoma City], and I grew up on 29th Street and I’ve been eating tacos my whole life. This little space [at OSO] just lent itself perfectly to the concept.”

Architecture firm AHMM designed a bright and breezy environment with plenty of natural light, a bar made from unpainted brick and Southwestern-inspired blue tile.

“It’s bright-colored and fruit-forward drinks,” he said. “Okies have a taste for sugar and drinks that are transportive. … We’re moving away from dark-based, traditional liqueurs and moving to experimental, specialty liquors, inland rums and things that weren’t even available in this market until the passing of the new liquor laws. It’s really jumpstarted and pushed Oklahoma’s cocktail market forward very quickly.”