Oklahoma Shakespeare in the Park (OSP) wraps up its 30th season with Macbeth, one of the company’s favorite plays, according to Kathryn McGill, OSP artistic director. 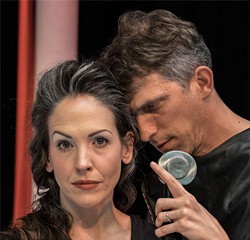 Oklahoma Shakespeare in the Park (OSP) wraps up its 30th season with Macbeth, one of the company’s favorite plays, according to Kathryn McGill, OSP artistic director. One might think a work held in such esteem would get better treatment than what’s seen in this production.

The show gets off to a halting start. First, a funeral procession bearing a child-sized coffin crosses the stage. Next, three scantily clad witches enter in all their feminine pulchritude. These Weird Sisters look more like sorority sisters, but when they open their mouths, they sound like Betty Boop crossed with a screech owl. Finally, several armed knights invade the stage and engage in some swordplay, accompanied by ominous-sounding, recorded music. Director D. Lance Marsh seems to be staging the theatrical version of a movie trailer for the production. With that folderol out of the way, the play begins.

But over the next two and a half hours, this OSP production doesn’t expand much on what we’ve seen in the first few minutes. For some reason, Macbeth is a difficult play to stage. Maybe it’s like Mozart’s music, so finely wrought with such close tolerances that it takes the best experts to execute it to a satisfying degree. Or maybe it’s just the curse of the “Scottish play.” (Show people are as superstitious as baseball players; they consider uttering the play’s title to be bad luck.)

Much of this play’s success depends on the collaboration between the director and the actors playing Macbeth and Lady Macbeth. David Chrzanowski takes the title role and plays it as if Macbeth were trying to avoid offending anyone. The character needs the pathological ambition to carry out some horrible deeds, but here, his niceness keeps bubbling to the top. One wonders if this amiable Scotsman could handle the job of thane of Cawdor, a title he’s granted by King Duncan (the avuncular James Tyra), whom he will soon assassinate, much less rule as king of Scotland, a title Macbeth steals on his own, abetted by his wife. Macbeth’s motivation often appears to come from some strange power his wife has over him.

As Lady Macbeth, Mandee Chapman-Roach charms when she needs to, but more seething ruthlessness from her at other times would be welcome. After all, when Macbeth expresses doubt about their plot to kill Duncan, the Lady shames him back into their sanguinary scheme.

Marsh, a drama professor, fills the cast largely with his Oklahoma City University students. Tanner Bradshaw gives Malcolm the right heft, especially later in the play, when he’s fighting for the Scottish crown.

The Devon Energy Tower plays its part, too, looming over the Water Stage striped in blood red.

Marsh tries to give the production a provocative ending not envisioned by Shakespeare (as far as we know). Surrounded by the Weird Sisters, Donalbain (Trevor Strahan) glares menacingly, sword in hand, as his brother, Malcolm, exits as king of Scotland. Bring on the fratricide.