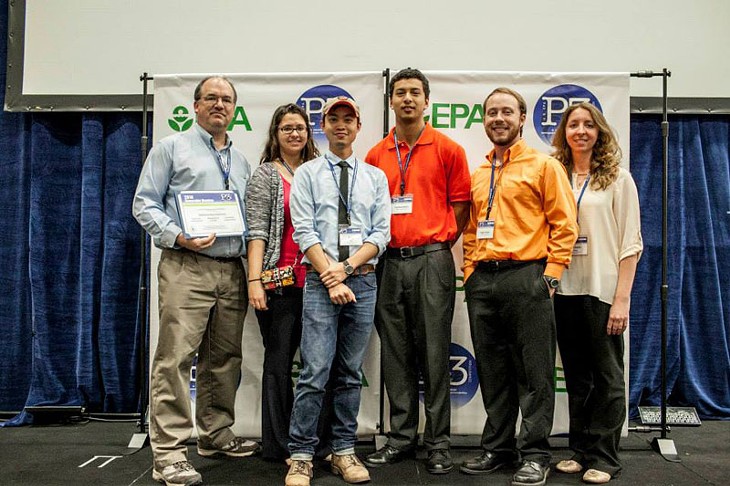 Oklahoma State University professors and students provided a solution for a poverty-stricken Honduran village that supplied clean water to all the residents. The OSU chapter of Engineers Without Borders has been working in the northern Honduran village of Seis de Mayo since 2009 to help the village of 1,200 alleviate the high infant mortality rate and diseases associated with water impurities.

The team, led by graduate student Eric Lam and associate professor of environmental engineering Greg Wilber, developed a biosand filter to remove impurities — called organic carbons — from the village’s drinking water. The infant mortality rate was so high that parents often would not name their children until they were three to four years old, Lam said.

The original filter design was made with a steel mold at a cost of thousands of dollars, but the OSU team designed a model that utilized locally sourced materials, including rock and wood, for the mold. According to Wilber, the filter can now be produced by locals for about $25.

Wilber said the Engineers Without Borders project is ongoing in Honduras, and the team is now trying to develop the filter for use in places with even more problematic water supplies. As part of that effort, Wilber and Lam wrote a proof-of-concept project to take to the USA Science & Engineering Festival in Washington, D.C., in late April.

“Eric and I wanted to investigate whether the filters could be used to treat worse water quality than we have at Seis de Mayo,” Wilber said. “Whereas Seis is using mountain runoff, which has a comparatively low total organic carbon (TOC) content, the other villages we’re looking at are using surface water and river water.”

In developing nations, river water often means there are communities upstream that dump human waste and other organic waste into the river, increasing the levels of pathogenic organic carbons. Wilber said treated water in the United States has a TOC rating of 0 milligrams per liter, Seis de Mayo is 6 to 8 and the new locations are 20 or higher.

Wilber said the competition revealed that the filters would work up to a TOC rating of 20 but failed beyond that level.

“That means we need to look at modifications that make it possible to provide clean water to other locations,” Wilber said.

Wilber and the team are currently looking for additional research money to help with the project. Also, the U.S. Department of State issued a travel advisory for Honduras in December of last year because of increasing crime and violence levels, creating additional headaches for travel plans to the country. Wilber said the target villages are far outside the areas of concern and the school would not take students to a dangerous area.