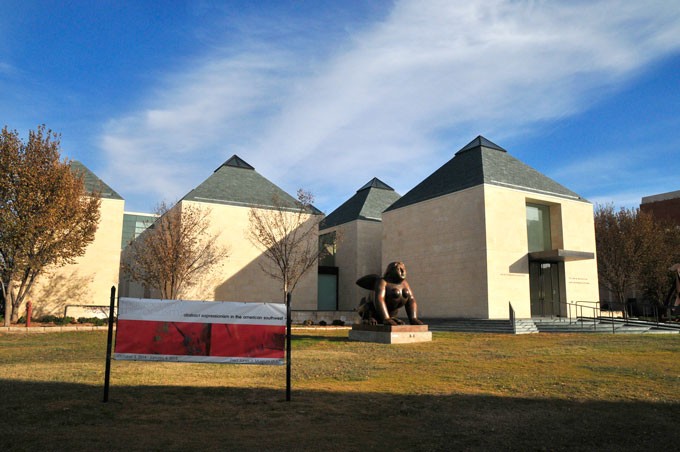 During the World War II occupation of France, the Nazis stole a painting belonging to Raoul Meyer. Seventy years and a few owners later, the piece, “La Bergére rentrant des moutons,” or “Shepherdess Bringing in Sheep,” by Camille Pissarro, hangs on a wall at the University of Oklahoma’s Fred Jones Jr. Museum of Art in Norman. It is valued at more than $1 million.

Jewish-French businessman Raoul Meyer was a well-known art collector. He had a large collection of impressionist paintings prior to WWII. His adopted daughter, Léone Meyer, has been fighting to get her family’s painting back since she discovered its location in 2012. Léone Meyer’s entire biological family died at Auschwitz between 1942 and 1944. At 75 years old, Léone is the sole heir to the painting and resides in Paris, France. The painting presently belongs to the University of Oklahoma Foundation, Inc. The OU Foundation’s refusal to return the artwork sparked a social media backlash, a Change.org petition and an Oklahoma House Government Modernization and Accountability committee hearing and investigation. Meyer sued the OU Foundation for the painting’s return, and the case is currently undergoing the appeals process.

“There are at least 100,000 works of art still missing from the Nazi occupation,” Philip Saunders, editor of the stolen art register Trace, said in 1997.

In 2012, hundreds of paintings looted by the Nazis were found in a home in Austria. In February of this year, dozens more works of art looted during WWII were discovered in the same home. The home housed more than 1,400 works of art estimated to be worth $1.35 billion.

At the European Union conference hosted by the Czech Republic in 2009, 46 countries signed the Terezin Declaration, an executive agreement that “urged” countries to decide Nazi-looted art claims based on facts and merits instead of procedural technicalities. The United States signed the agreement.

Art historians are able to accurately estimate the number of artworks missing because the Nazis kept detailed records. The paintings were often displayed in German galleries or sold for profit.

The Meyer family’s Pissarro painting was one of those works. After the war, Raoul Meyer listed his stolen works of art in the Registry of Assets Looted in France during the War of 1939-1945. He eventually tracked down the painting and sued Swiss art dealer Christoph Bernoulli in 1953. Bernoulli, a Swiss art dealer, had purchased the painting. The Swiss judge dismissed the case on a technicality, stating that Meyer missed the window for such lawsuits by five years. This established Bernoulli as the “good faith” owner.

The painting then made its way to New York, where Oklahoma oilman Aaron Weitzenhoffer and his wife, Clara, purchased it in 1956. The couple’s estate bequeathed the painting, along with 32 others, to the OU Foundation in 2000.

“I cannot conceive that the University of Oklahoma could aid and abet those crimes in any form,” Léone Meyer said in an open letter to the citizens of Oklahoma. “The family that donated the paintings, including “The Shepherdess,” did so without realizing the dubious history of them.”

Legal action In June of 2010, Annette Schlagenhauff, associated curator for research at the Indianapolis Museum of Art, contacted OU. Schlagenhauff informed the university that the painting had been stolen and Léone Meyer was the heir. The university did not reach out to Meyer, according to documents from Oklahoma State Rep. Mike Reynolds (R-HD 91).

In 2012, one of Meyer’s children discovered the whereabouts of the Pissaro painting. Meyer reached out to the university and the university asked for time to investigate the claim. Months went by and nothing occurred. Meyer filed a complaint against in the university in May of 2013 with the U.S. District Court of the Southern District of New York.

The lawsuit, however, was dismissed on May 14, 2014. Judge Colleen McMahon ruled the defendants must be tried “at home” in Oklahoma because they do not do sufficient business in New York. The Meyer family again lost due to a technicality.

Following the court’s decision, OU released a statement: “Simply transferring the piece to someone who has refused to cooperate in demonstrating rightful ownership or entitlement to it would, among other things, set a very poor precedent and risk disgracing all prior good-faith purchasers and owners of the painting (such as the Weitzenhoffers) whose families were gravely victimized during World War II.”

The Meyer family has appealed a portion of the decision.

Representative fights Rep. Reynolds, at the time the sitting chair of the Government Modernization and Accountability committee, sent a letter to Emily Neff, the director of the Fred Jones Jr. Museum of Art. In the letter he asked for Neff to detail the vetting process the university used when they initially received the donated painting. He wrote that the university’s “due diligence is lacking” and argued OU failed to comply with the American Alliance of Museums stance on the unlawful appropriation of artwork during the Nazi era.

The American Alliance of Museums’ accreditation board refused to review the case since litigation is ongoing. Reynolds asked why the university used private counsel instead of the state’s attorney general in his letter. The day after Neff received the letter, she resigned.

“Her desire was to pursue other career goals,” Bishop said.

The university refused to further comment on both her resignation and the lawsuit.

Reynolds wrote a second letter to OU President David Boren requesting all the records regarding Neff’s resignation, including emails and telephone records between Neff and any party, since the time she took over as director in January to the point of her resignation on Oct. 15.

“They don’t want to set a precedent because we suspect there could be other pieces in the collection that are stolen,” Reynolds said.

The Oklahoma Daily, the university’s student newspaper, discovered the museum owns 40 paintings considered to be Nazi-era provenance via research on the Nazi-Era Provenance Internet Portal. The portal is a nonprofit that helps families and museums discover paintings that may have been looted by Nazis during World War II.

The portal does not state that the 40 paintings were definitively looted by the Nazis. However, the portal contains information on potential Nazi-looted art based on three factors: the works of art must have been created before 1946 and acquired after 1932, the works of art underwent a change of ownership between 1932 and 1946 and the works of art were thought to be in continental Europe during that time.

For a museum to own many works of art that changed hands during the Nazi era is not uncommon. The majority of the paintings are likely in good faith. However, Rep. Reynolds contends there might be as many as nine additional stolen paintings, based on research his committee has conducted.

The Meyer family’s attorney, Pierre Ciric, said Léone is not seeking any kind of financial compensation.

“She is simply seeking to get her painting back,” Ciric said.

Print headline: Lost Shepherdess, The University of Oklahoma has art stolen by the Nazis on display at Fred Jones Jr. Museum of Art.