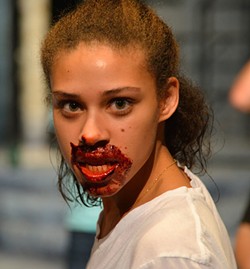 The University of Oklahoma University Theatre picked the right one to open the season.

Now it’s time for audiences to come in.

The group opened its season with Jack Thorne’s stage adaptation of Let the Right One In.

Helmerich School of Drama at the University of Oklahoma (OU) is the first amateur production in the U.S. to have the rights to perform the piece.

Let the Right One In continues its run 8 p.m. Thursday-Saturday and 3 p.m. Sunday in Weitzenhoffer Theatre, 563 Elm Ave., in Norman.

Bram Stoker’s horrifying vision of vampires enters the 21st century in the play, which is based on the best-selling novel and popular film of the same name by Swedish author John Ajvide Lindqvist.

The production is rated R and recommended for college-aged and older audiences.

Director Tom Huston Orr, the school’s James Garner Chair Director, said the play is a beautiful and touching love story about the struggles of growing up, how isolated our adolescence is and the overwhelming desire to connect with someone.

“It’s not a vampire story so much as a love story that involves a vampire,” he said. “And a lot of blood ... and some heart-stopping frights.”

Weitzenhoffer Family College of Fine Arts dean Mary Margaret Holt said alumnus and benefactor A. Max Weitzenhoffer was integral to bringing the title to the group and helping secure the rights for its production.

“Max [Weitzenhoffer] brought the play to our attention, and it resonated as especially being of interest to student audiences,” Holt said.

A producer of theater productions in New York and London, Weitzenhoffer is a Casady High School graduate who discovered his love of the stage as a student at OU.

After years of producing plays in New York City, he shifted focus to London, where he owns six theaters in the city’s West End.

That’s where Weitzenhoffer produced the original stage adaptation of Let the Right One In.

It wasn’t his first experience with theatrical vampires, though.

He won the 1978 Tony for Most Innovative Production of a Revival for Dracula on Broadway.

Holt said the play represents the department’s dedication to selecting challenging pieces for the season that take full advantage of the skills of designers, technicians and performers.

“It’s a very difficult play,” she said, “challenging in its script, production requirements and emotional content.”

The school hopes it appeals to a wide audience, both for the intense story and the complex staging.

Let the Right One In runs more than two hours and is different from the rest of the group’s upcoming season in subject matter, imaginative production style and intensity, Holt said.

The entire production team embraced the challenge of the piece to bring the unusually charged story to life.

“It is an intriguing production in every respect,” Holt said.

Print headline: Bloody romantic, Student actors at OU sink their teeth into vampiric love story Let the Right One In.

Let the Right One In