A group of Del City students joins two lawmakers in their efforts to remove LGBTQ+ discrimination from classrooms. 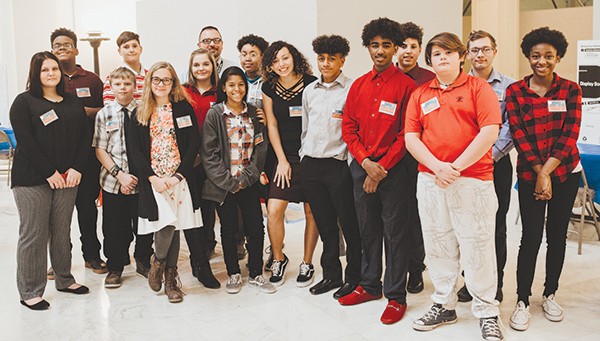 On national Civics Day, Aaron Baker’s eighth-grade civics class students presented state Legislature members at the capitol with reasons AIDS prevention education in the state is both outdated and discriminatory.

The education might have been reflective of the culture their parents were raised in, the students said, but it has no place in theirs.

In 1987, state lawmakers passed a measure that mandated AIDS prevention education for seventh- through 12th-graders in public schools across the state.

While Oklahoma is among the minority of states in the nation that do not mandate sex education in public school, AIDS prevention is mandated through a statute passed over three decades ago.

Parents can choose to opt their children out of the education with a written request.

However districts choose to educate students on AIDS prevention, the law states that certain lessons must be conveyed.

“AIDS prevention education shall specifically teach students that engaging in homosexual activity … is now known to be primarily responsible for contact with the AIDS virus,” the mandate states. “Avoiding the activities specified … is the only method of preventing the spread of the virus.”

While the mandate mentions that “promiscuous sexual activity,” “intravenous drug use” and “contact with contaminated blood products” can also cause AIDS, the students said the causation the law implies between homosexuality and AIDS is offensive and inaccurate.

“It’s been 30 years since this law was written,” Justuce Wright, 13, said. “We know that being gay doesn’t mean you have HIV or that you’re going to get it. But people might think that’s true if all they hear is what’s in this law.”

“People assume AIDS is over, but we’ve actually seen a slight increase in instances of contraction in Oklahoma in the past few years. We need to make sure that we are giving our students the most up-to-date and accurate information possible so they can take the measures they need to take to protect themselves,” Virgin said.

For starters, Virgin said, the 1987 mandate does not address how HIV can be a precursor to AIDS. Virgin said she’d like to see revisions to the mandate that include adding HIV prevention education and a clear acknowledgement that unprotected homosexual activity is not the only way one can contract the disease.

While Virgin’s bill failed to become law during the last legislative session, she recently teamed up with State Rep. Marcus McEntire, R-Duncan, to draft a new bill that would be similar to HB1538.

While the bill’s focus will be prevention education, Virgin said she hopes that changing the language of the mandate will be one way lawmakers and educators can show support for the state’s LGBTQ+ community, one that some of Baker’s students belong to.

Out of Baker’s class of about 20 students, three identify as LGBTQ+.

Those three are reflective of the 34 percent of individuals from Generation Z (those born between the mid 1990s and the mid 2000s), who identify as being LGBTQ+ according to a study published by United Kingdom-based marketing research company Ipsos MORI.

The students said that while their generation might be open-minded, junior high students can be cruel.

While Scott identifies as heterosexual, he said bullies have called him gay for years.

The students said bullies who target those they believe are LGBTQ+ in their school are easier on girls than they are on boys, a testament that speaks to the loss of several young boys across the nation due to suicide in recent years.

Just this past August, a 9-year-old Colorado boy committed suicide after being teased for being gay at school.

According to The Trevor Project, a national organization that provides crisis intervention and suicide prevention services to LGBTQ+ youth, suicide is the second leading cause of death of those between the ages of 10 and 24. The rate is significantly higher for those who are bullied due to their sexual identity.

Baker’s students said if Oklahoma’s lawmakers are hesitant to spark a change in attitude regarding the state’s LGBTQ+ community, they should at least support students in their effort to make a change.

Baker’s students were overjoyed to learn that Virgin will continue her efforts to update the state’s AIDS education mandate.

“We learned a lot about civics and a lot about ourselves through this project,” Angel Bushey, 14, said. “Even though it was really scary to stand up there in front of [the Legislature] and talk about what we believe, I would definitely do it again.”

By creating legislation that is bipartisan, Virgin believes the bill will receive success this time around.

She said she and McEntire will file their bill by Jan. 17, the deadline to submit new legislation that will be considered during the upcoming 2019 legislative session.