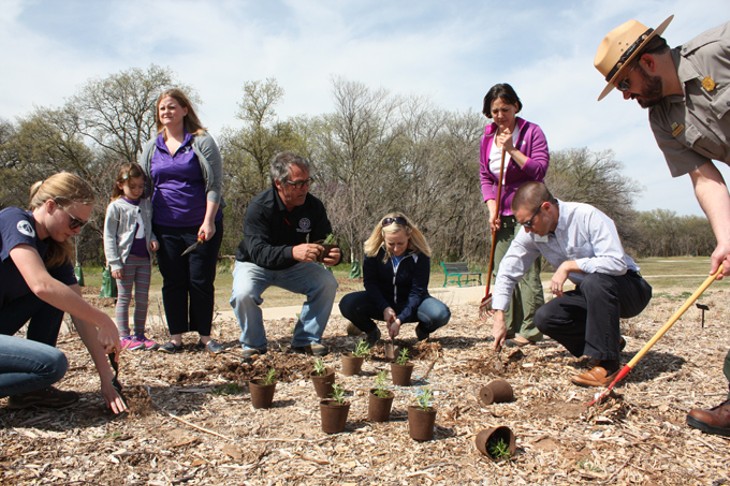 Oklahoma City is embarking on a national movement to engage the next generation of outdoor stewards to play, learn, serve and work on public lands.

A series of service projects, recreation and environmental education initiatives will launch in OKC over the next two years through the Let’s Move! Outside initiative. OKC was one of 50 U.S. cities chosen to participate in the nationwide movement established by first lady Michelle Obama.

Kris Sarri, the department’s principal deputy assistant secretary for policy, said existing efforts to get people outdoors and connected with nature prompted the Department of the Interior to select OKC.

“Just learning about the incredible work [Mayor Mick Cornett] is doing and the city is doing, Oklahoma City really gets it,” Sarri said March 22 at Bluff Creek Park.

Leaders from the City of Oklahoma City and YMCA of Greater Oklahoma City joined Sarri to kick off the initiative at the park. The YMCA will lead the local effort. Additionally, the federal agency will support an AmeriCorps volunteer to aid in the efforts.

“We really think this will allow us to go bigger, faster and more boldly, in terms of working on outdoor stewardship,” Sarri said.

The city has invested millions of dollars in quality-of-life projects to get people outside and active. Voters first supported sales tax-funded Metropolitan Area Projects (MAPS) in 1993. The first round of MAPS projects brought improvements along the North Canadian River and financed a downtown ballpark in Bricktown. Renovations to improve the city’s parks followed the passage of a 2007 bond issue.

Now, through MAPS 3, the city is undergoing major capital improvement projects for a new downtown park, trails, sidewalks and continued improvements to the Oklahoma River.

With the Let’s Move! Outside initiative, the YMCA hopes to build on city park participation and connect new residents to urban public spaces.

“The overall goal is to engage anywhere from 10,000 to 20,000 volunteers,” said YMCA’s Angela Jones, the initiative’s community coordinator. “[The Department of Interior] is looking to engage 1 million people across the nation. … U.S. Interior Secretary Sally Jewell has set the bar high, but we feel … that goal is doable.”

The American Express Foundation will provide two years of funding to the local nonprofit for coordinating new efforts and facilitating collaboration with other local groups focused on nature or youth. Through joint efforts, the YMCA looks to create and strengthen programs that encourage children and their families to visit local, state or national parks in Oklahoma. The YMCA will connect with local partners at a community summit planned later this spring.

“The goal is to have that collaborative spirit,” Jones said. “How can we capitalize on what is currently happening?”

One way is to emulate the Oklahoma State Parks Passport Program, which encourages children to visit any of the state’s 34 parks with a passport booklet. Through a partnership with the Oklahoma City Parks and Recreation Department, a similar booklet is in the works for OKC parks, Jones said.

Children will find activities and suggestions for OKC park visits in the booklet. Additionally, the YMCA is inviting state park rangers to interact with youth at its summer camps.

With a goal to increase park visits by the thousands, Jones admitted there will be challenges. Studies show that some children prefer screens to outdoors for recreation. However, Jones is confident newly created programs and collaboration efforts will lead families to play and gain a better appreciation for the outdoors.

Print headline: Play outdoors, Let’s Move! Outside comes to OKC with the YMCA leading the effort to get families engaged outdoors.