Throughout her theatrical Beautiful Trauma tour stop in Oklahoma City, Pink bonded with the audience and then sailed above them. 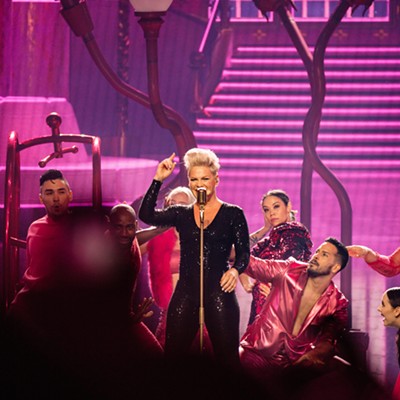 As the pink curtain dropped Saturday night at Chesapeake Energy Arena, the audience joyously screamed with anticipation. Behind it swung Grammy Award-winning powerhouse Pink on a chandelier that hung over center stage. She wore a head-to-toe black sequined bodysuit, matched with her famous pixie haircut and a voice with strength that could knock you off your feet. She opened with her 2001 classic “Get the Party Started” from her second album, Missundaztood. Audience members including an 8-year-old girl with noise-canceling headphones and fans over 60 were all smiling. The night had only just begun.

It is no secret that Pink is keen to woo the audience. Her chandelier stunt was the first of many acrobatic achievements during the concert. Pink is famous for her acrobatic routines; she has performed them on numerous award shows and music festivals such as the Grammys, Billboard Music Awards and iHeartRadio Music Festival. Think Cirque de Soleil meets 21st century pop/rock icon — the theatrics were to be heard, seen and danced to at the most beautifully dramatic degree possible.

Among the six acts in the show (seven including encore) was a mystical Little Red Riding Hood theme. While Pink was offstage for a costume change, her dancers performed in spooky animal masks. There was fog covering the surface of the stage, followed by the dancers holding candlesticks in dim light. When the fog broke, Pink appeared wearing a bright red over-the-top cloak in a scene that looked like something out of Tim Burton’s Alice in Wonderland.

Another act began with an empowering video showcasing Pink’s humanitarian viewpoints on life. The video moved the audience to tears while showcasing the enormous struggles that women of all ethnic backgrounds face every day. This interlude provided a visual behind Pink’s lyrics. Pink is iconic for standing up for women’s rights, specifically women society deems “different” when it comes to body shape and feminine/masculine traits. Pink narrated throughout the film, saying, “We all cry real tears,” and “I don’t want there to be gay marriage; I just want there to be happy marriage.” The audience was wooing and cheering toward the end in agreement. It was clear there were some in the audience who took the night off to feel free.

Earlier in the concert, Pink’s energy was euphoric while covering No Doubt’s “Just a Girl” followed by Nirvana’s “Smells Like Teen Spirit.” However, the audience seemed most engaged while Pink played another video interlude. The video was simply a narrative of her words on screen as the entirety of her speech from accepting the Michael Jackson Video Vanguard Award at the 2017 VMA’s played aloud. The speech was about her then 6-year-old daughter saying that she looked like a boy and Pink making her daughter a PowerPoint of androgynous rock stars such as Prince, David Bowie, Annie Lennox and others. Pink went on to say how these rock stars were made fun of every day for how they look but are still strong in who they are. She then pointed at herself and said how the media claims “[her] body is too strong.”

“Do you see me changing my body?” she asked.

“No, Mama,” her daughter replied.

“Do you see me selling out arenas all over the world?” Pink asked.

“We help other people change so they can see more kinds of beauty,” she said.

The audience went mad as screaming, cheering and empowering waves of acknowledgement swamped the arena. Pink sang “Raise Your Glass” and “Blow Me (One Last Kiss)” before exiting before her encore.

Lastly, Pink’s acrobatic routine hit a high as she performed “So What” on a bungee apparatus, dancing in the air around the entire arena. From the front row to the nosebleed section, Pink had a chance to see her glowing Oklahoma City audience one last time.

Pink was impressive, memorable and theatrical beyond measure. This is a show for people of all ages and ethnic backgrounds — everyone. Pink’s Beautiful Trauma tour was a night Oklahoma City will never forget.