High school soccer players struggle to process the world beyond suburbia in The Wolves.

The Wolves pounces from the opening lines with a flurry of overlapping conversations about Nuon Chea, the 90-year-old right-hand man to Khmer Rouge leader Pol Pot, who was responsible for the Cambodian genocide of over a million people. All while casually getting ready for a soccer match within their stretch circle.

The innovative play about nine fiercely competitive high school soccer players often reads like a shotgun blast of dialogue, but it is an astonishingly nuanced series of character studies written by Sarah DeLappe that earned a 2017 Obie Award (off-Broadway theater award) for ensemble performance. Nominated for a Pulitzer Prize, The Wolves focuses on realistic dialogue intentionally written to be somewhat clumsy and inelegant, similar to Mamet Speak, the term coined for David Mamet’s rapid-fire playwriting style. Though untraditional, DeLappe’s story is approachable for its abundant humor, heart and of-the-moment subject matter. 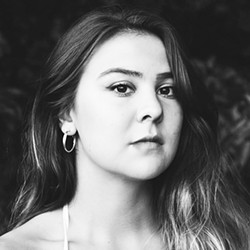 “It’s not really a #MeToo play, but it does deal with sexism and inequity in how women’s sports are treated in regards to supplies and options available when compared to men’s sports,” said director and Oklahoma City University  assistant professor Courtney DiBello. “The teen girls are also discussing things like refugees coming up to the southern border trying to get asylum and how they are treated in the camps.”

The Wolves’ characters are known primarily by their jersey numbers, and names are only revealed intermittently within dialogue. It makes the audience feel apart from the group, ignorant of the rich lives and relationships, and only able to piece some of their backstories together through hints dropped in the script. The experience is more like eavesdropping rather than having a story carefully doled out. Dialogue also is not listed one line at a time in the script, but often there are as many as three columns of dialogue going at one time, which presents a huge challenge for the director.

“Sarah DeLappe described it as being like making music,” DiBello said. “The dialogue on the left side of page is the primary melody and the dialogue to the right is more supplemental, ornamental elements. She doesn’t intend the secondary dialogue to be as well heard as the primary dialogue. The trick for us is to make sure that the audience doesn’t miss anything, so if you slow down your mind and try to take it all in like you would music, you won’t miss a thing.”

So DiBello is almost conducting the play as if she were standing before an orchestra. Another catch to the script is those secondary dialogue elements are revealing character motivations, fears and quirks that help explain the complex chemistry of the group as a whole. Even the lines that fade more into the background aren’t considered throwaways. Interwoven in all the crests and troughs of the conversations are the small details that add illumination to the array of personalities on the team.

“The playwright created this Easter egg hunt for us,” DiBello said. “There isn’t a single place to get all the info where the story and the characters are broken down for us. We had to go through the script with a comb, looking for clues like Sherlock Holmes, and only after the umpteenth read did we start to get all the nuance.

“From an audience perspective, it’s lovely because you are having all this revealed to you over time. It can be frustrating from a performance side because none of this information is spelled out for us. I have a few actors in this play who’ve been in it before who are just now realizing things about the play. It’s crazy that you can go through an entire rehearsal period and still come back a second time to find new things.”

The play is broken up into single-scene acts set during six weeks in an indoor soccer league. The players are trying to attract college scouts ahead of their senior year of high school, so stakes are high. They talk in the familiarity of a developmental team that has played together as one unit since they were children. Not all of the players are friends, not all of the players even like each other, but they respect one another’s commitment to the sport and are very suspicious of any coach or new player that might disrupt their team chemistry.

Fortunately for DiBello and the cast, there are no scenes involving actual soccer play. The script is difficult enough as it is to cast with nine fully realized characters all demanding equal time on stage, but finding nine elite soccer players able to handle the character complexity would be nearly impossible, even for off-Broadway theater.

“The playwright was quite kind that the skills that the actors are being asked to do are achievable so I’m not having to find high-level soccer players,” DiBello said.

The production enlisted the help of Nathan Doll, an assistant coach of the OKCU women’s soccer team, to help instill some authenticity into the program, both by going over the drills shown in the play, but also to advise on some of the aspects of elite soccer that might only be known by those within that culture.

“Nathan helped us all the way down to the small nuances of the captain always has the soccer ball with them and the goalie doesn’t ever take her gloves off for some reason, even when running,” DiBello said.

But the cast does not ever have to perform soccer skills more trying than basic passing drills and stretching because this is not really a play about soccer. The Wolves is more about teenagers learning how to process the world in the only way they know how: talking, listening and watching within their peer group. Though it might come off as chatter, the play makes it clear that these nine characters are all coming from nine unique perspectives and aren’t

fully formed as adults. When they talk about genocide, sexism, racism, political correctness, they are testing reactions, pushing boundaries and learning together. They might not understand why it’s offensive to use the term “retard” until they get a negative reaction. Or why it’s not appropriate to reveal a trusted secret. Or how to deal with death.

The play might be set on a soccer field among elite athletes, but DiBello thinks the way the group is sorting out emotions collectively is universal among teenagers.

“Soccer is just the reason they are there; you could retell this story in any group activity of teenage life,”

So when a player trips up and says something the group rails against, that is part of the learning experience inherent in the teen years when social boundaries aren’t always so obvious.

“Thank God there was no social media when I was that age,” DiBello said. “So all that dumb stuff I said back then won’t be displayed in the digital universe forever.”