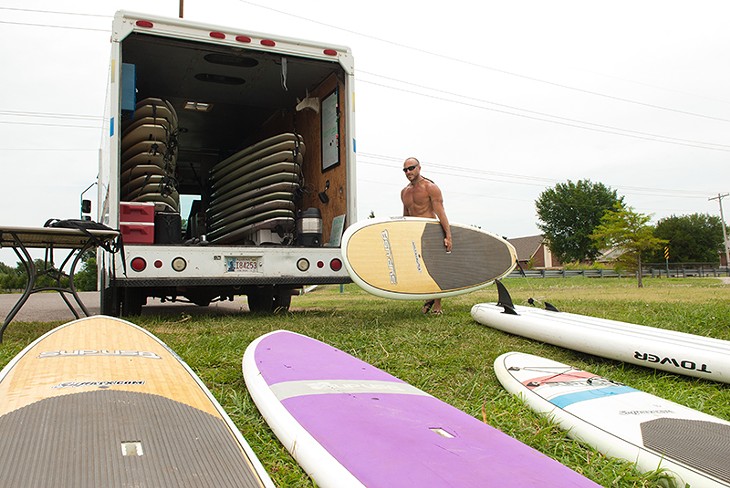 A box van sits placidly on the shore of one of Lake Overholser’s many tributaries with an assortment of water sports gear on the shore. Across the water, birds dive- bomb prey and the sounds of the city are reduced to a whir.

“It’s really cool back there. You kind of feel like you’re out of Oklahoma City,” Eric Pappas said.

Pappas is a lifelong aficionado of boardsports of all kinds. He is also the co-founder, along with principal founders Jason and Paige Smiley, of Flat Tide, Oklahoma’s largest paddleboard rental fleet.

After finding inspiration in Austin, Texas, in 2012, Pappas and the Smileys opened their mobile company in OKC last year.

In a single year, Flat Tide grew from a small, nomadic operation to a largely stationary one, eventually choosing to maintain a semi-permanent base at Lake Overholser. In that same year, their average rental rate increased from four boards per day on the weekends to more than 40 per day.

“We started with eight boards and the truck,” Pappas said. “Fast forward to this year, we’re teamed up with SUP ATX, and they leased us out 100 boards. That made us the second largest rental fleet in the United States, next to Austin.”

Paddleboarding has its roots, along with surfing, as one of the primary means of transportation and leisure in Polynesian and Pacific Island cultures dating back more than a thousand years.

According to Pappas, paddleboarding is quickly becoming one of the most popular watersports in the world — especially in landlocked locales like Oklahoma. One reason might be its versatility.

SUP Yoga is offered every Tuesday and Thursday, taught by instructor Kerry Myers.

“When we first started, we played around, trying to see what we could do without falling off,” she said.

Myers said that doing yoga on a paddleboard teaches the practitioner how to distribute their weight more evenly.

“When you take that practice back to land, you’re more aware of where your balance is at,” she said.

Currently, Flat Tide is trying to bring competitive paddleboarding to OKC in the form of Waterman’s Paddle for Humanity, an annual race series that helps raise money for food kitchens and programs that support homeless youth. For casual paddlers, Flat Tide offers $20 rentals on the weekends and $15 rentals during the week. To learn more, visit Flat Tide at flat-tide.com.