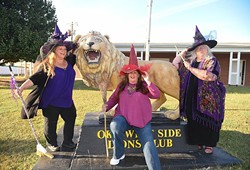 Organizers of Oklahoma City’s Pagan Pride Day (PPD) want to educate the public about what paganism really is.

Despite Oklahoma being a traditionally Christian state, Pew Research Center reports that it also is home to a growing number of people who do not identify with the religion. These alternatives to traditional religions are often defined as paganism, and many have accepted that label as a point of pride.

OKC’s pagan community hopes to establish a firm standing in the state’s culture. Now in its third year, Saturday’s celebration serves to spread that feeling of solidarity and encourage awareness and education of the lifestyle. It kicks off at 10 a.m. at Oklahoma City West Side Lion’s Club, 4135 NW 10 St.

“Pagans are as varied in their practices and philosophies as other spiritual traditions but have much in common as well,” said Emmah Eastwind, an event co-organizer. “Among pagans, you will find environmentalists, home-schooling parents, gardeners and musicians … who are strongly engaged in bettering the world through philanthropy … and grassroots socio-political activities.”

Pew reports show 79 percent of Oklahomans identify with the Christian faith. Because of this, one might expect PPD organizers to experience some opposition to the event, but that is not the case, said Deanna Broadston, event co-organizer.

“I think [Christians and non pagans] will be entertained and enlightened,” Broadston said. “It is a celebration of our spiritual paths and a way of sharing those beliefs in a fun, nonconfrontational way with the greater community.”

Organizers also said that the atmosphere will not just be educational, but enjoyable.

“With the music, belly dancers, drum circle, [people can] learn something new in one of the workshops or lectures or be a part of the co-creative process of our autumnal equinox celebration,” Broadston said. “[Guests] have an opportunity to ask questions, connect with resources and shop.”

There will be live music, fire dancers and a large children’s area where kids can make crafts, hear stories and sing. Vendors will sell handcrafted items such as embroidery, soap, crystals and stones. Donations for the Lions Club; Other Options, Inc.; and The Bella Foundation also will be accepted.

“We believe in giving back to the community,” Broadston said.

Pagans feel that communion with a deity is a largely personal act that sometimes takes place in small groups and might include prayer, candle lighting, singing or chanting, meditation, dance and drumming, Eastwind said.