A new law created by Senate Bill 1446 aims to reduce opioid dependency but might have unintended negative effects on sufferers of chronic pain. 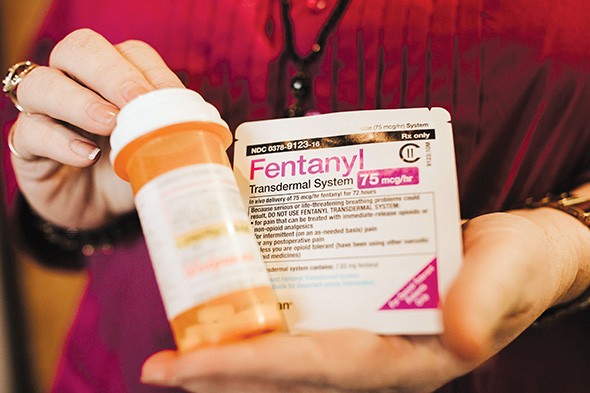 In October, chronic pain sufferer Dan Freeman (not his real name) received a letter from his pain management doctor stating that a severance of treatment was necessary due to a new law on the horizon.

A following letter from his doctor provided Freeman with three steps to tapering off his Percocet.

“If it was that easy,” Freeman said, “I wouldn’t have needed to go to the doctor in the first place.”

In 1986, while performing construction work, Freeman broke his sternum during an attempt to save a coworker from being crushed under a trailer that fell on top of him.

“I was pretty tough back then,” Freeman, 65, said. “I just started lifting the trailer off of him by myself. A couple guys came out to help and all of a sudden, we heard a loud crack. Everyone kind of got real still, and I remember wondering what that sound was because it was so loud.”

Everything after that is a blur. Freeman’s coworker survived, but Freeman’s injuries including a broken sternum, broken shoulders, hands, ribs and neck resulted in chronic pain that makes sitting in one place for too long and walking painful, even when he is on his pain medication.

Freeman’s fiancée, 55-year-old Gayle Harrison (not her real name), also suffers from chronic pain that resulted from a traumatic experience.

In 2003, Harrison, a licensed professional counselor, was working with underserved children who had experienced trauma themselves at a church when a young boy grabbed a pair of scissors and held them at another child’s throat.

Harrison was able to wrestle the scissors away from the boy, but not without falling to the ground and breaking three of her spinal discs.

“I was in my late 30s,” Harrison said. “Getting hurt like that was never something I expected, and I did everything the doctors told me to do to get better.”

Harrison received 15 rounds of physical therapy, MRIs and CAT scans, epidural injections and a spinal stimulator that was surgically placed in her back but had to be removed due to an infection.

“When you tell people, even people in the medical field, that you are on opioids for chronic pain, you’re given more than just suspicion; they treat you like you’re a piece of dirt.” — Gayle Harrison tweet this

Her pain medication and her faith, she said, kept her functioning.

United by their desire to help others and an understanding of each other’s chronic pain, the couple said they have grown accustomed to being treated like criminals in pharmacies and emergency rooms.

“When you tell people, even people in the medical field, that you are on opioids for chronic pain, you’re given more than just suspicion,” Harrison said. “They treat you like you’re a piece of dirt.”

For pain relief, Harrison takes Percocet and fentanyl. She also takes a prescribed muscle relaxant and a prescribed medication that eases nerve pain.

“I have never been high in my life,” she said. “And I don’t want to be. If I had it my way, I wouldn’t have to take any of these pills. But I can’t live with this pain.”

Harrison said her doctor recently suggested she have another spinal stimulator implanted in her back, but she refused the procedure after learning that SB1446 could prohibit her from receiving her regular medication dosage.

“The law states now that patients can be prescribed no more than a 100 morphine milligram equivalent,” she said. “I have been told that it takes 405 milligrams of morphine to combat my pain.”

Oklahoma Attorney General office spokeswoman Terri Watkins said when patients are told they can no longer be seen by their pain management doctor, it’s because the doctor has likely misinterpreted the law.

SB1446 was signed into law by Gov. Mary Fallin in May after attorney general Mike Hunter and The Oklahoma Commission on Opioid Abuse spearheaded a movement to prevent opioid addiction in the state.

“I appreciate the members of the Legislature for their decisive action this session on the recommendations by The Oklahoma Commission on Opioid Abuse,” Hunter said during a press conference after the bill received approval from the House. “The bipartisan support from both chambers shows the commitment of members to saving lives and putting a stop to the opioid crisis that continues to claim an average of 1,000 Oklahomans every year.”

On prescribers, the new law places the requirements of undergoing at least one hour worth of pain management education each year; consulting with patients every time a new opioid prescription is prescribed to them; checking in with the Prescription Monitoring Program, an online database that tracks patients and their opioid prescriptions; and documenting all processes mentioned.

The law states that prescribers can give acute pain sufferers no more than a seven-day supply of the lowest effective dose of opioids for first prescriptions. A second seven-day prescription can be issued after a patient-doctor consultation takes place in person or over the phone.

Chronic pain patients can continue receiving a one-month supply of their opioids under the new law but must consult with their pain management doctors every three months.

SB1446 states that opioid prescriptions for all patients should be under a 100 morphine milligram equivalent unless the prescriber can provide documentation demonstrating a need for a higher dosage.

If pain management prescribers are being overly cautious, executive director of Oklahoma Board of Medical Licensure and Supervision Lyle Kelsey said it’s to be expected.

“It’s hard to be a pain management doctor in Oklahoma right now,” Kelsey said. “These doctors have been trained to be compassionate caregivers, and now they are asked to be police officers.”

While Kelsey is an advocate and proponent of SB1446, he said he understands that the change could initially cause some otherwise unwanted side effects.

However, Kelsey said letting go of patients is preventable.

While cancer, hospice, palliative care and long-term care facility patients are exempt from the requirements set forth in SB1446, Harrison and Freeman said one way to ensure success is to give chronic pain sufferers an exemption as well.