Heather Levy explores dark themes of love, redemption and pain with her debut novel, which is both lauded and feared. 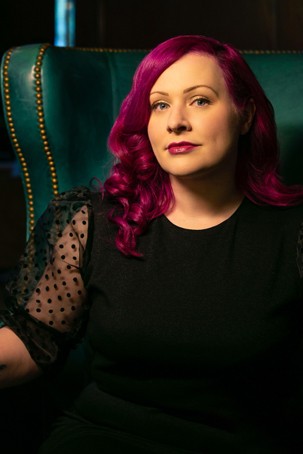 Heather Levy knew she was courting controversy with her debut novel, but the praise is likely more to sell copies.

Here’s what her publisher, Polis Books, says about “Walking Through Needles:”

“When Sam Mayfair was sixteen, her life was shattered by an abuser close to her. News of her abuser’s murder fifteen years later should have put an end to the torture she’s endured because of one decision plaguing her life. But with her stepbrother Eric as the prime suspect, Sam is flung back into the hell of her rural Oklahoma childhood. As Sam tries to help exonerate Eric while hiding certain truths of their past from investigators, details of the murder unravel. And Sam quickly learns some people, including herself, will do anything to keep their secrets buried deep.”

And here’s what Publishers Weekly wrote about the book: “Clean prose is a plus, but readers should be prepared for masochism, incest, and sexual abuse of more than one minor. This won’t be to the taste of every mystery fan.”

“Is it really incest though if it’s like a stepsibling?” Levy laughs. “I had a recent essay talking about chronic pain and kink and my experiences with it because it ties in with the book because the book is very much kind of a fucked-up coming-of-age story for a masochist.”

“There are a lot of people putting trigger warnings and calling my book ‘dangerous.’ They probably don’t realize, those particular people, that there’s a huge community of kinky folks in the world and some of those people will relate to the story. Maybe not the other parts,” Levy said.

Meanwhile, It made an L.A. Times reading list this month and is on CrimeReads’ most anticipated crime books of the summer.

“There are some folks that they kind of forget what feminism is, and sexual freedom, and they kind of lump stuff like masochism and all that into, ‘Oh, this is either self harm,’ or ‘You’re an abusive relationship’ and that kind of thing,” Levy said. “And I’ve seen my fair share of reviews kind of touting that. I don’t know how they got that from the book because then another person who I might have thought would not even like it at all and they were like, ‘I love this. I see what you were doing with this book.’ It’s basically a love story. A really messed-up love story, but it’s also like somebody living their life and not giving a shit about what people think about their sexuality. At the same time, having somebody take advantage of them for that sexuality when they were at a young age, or a teen age. That’s a whole ‘nother thing, too.”

Even though she knows she shouldn’t, Levy continues to read the comments. In fact, she soon plans always to carry a piece of feedback on “Walking Through Needles” with her.

“‘Solid if distressing.’ That sounds like the best tattoo ever.”

The hardcover of “Walking Through Needles” will be available in bookstores June 29.

June 25: Virtual event with Murder By The Book, a Houston bookstore. 7 p.m. This event will be streamed on the bookstore’s Facebook page and YouTube channel.

AN EXCERPT FROM WALKING THROUGH NEEDLES

Sam waited until the new teller she was training balanced out her drawer before she went back to her office, shut the door and pulled the wrinkled invoice sheet from her purse. No matter how many times she read Eric’s note, it kicked the breath out of her.

I’m sorry I wasn’t ready to talk before, but I’d like to see you. Please call me—Eric.

When she saw him the day before, it was like watching a ghost floating her way. He was staring at a dark-headed toddler waiting in line with her father. Eric’s expression was so tender and sad Sam almost jumped over the teller wall to hug him, but that was the sixteen-year-old in her. The thirty-one-year-old woman told her to stop looking his way before he would inevitably notice her. But, Jesus, he looked the same. Any boy left in him had been shaved away, making the angles of his tan face sharper. The honey waves she had once run her fingers through were cropped closer to his head, but he was the same Eric—taller and filled out with more muscle, but the same. She had forced herself to help one of the tellers, sensing when Eric’s coffee-colored eyes found her. Her nerves marbled her skin with pink, sweat pearling on her skin, but she carried on working as if he really was a ghost.

Her heart slowed some when she saw Eric run out of the bank, but it raced again when she later watched him in her rearview mirror as he trailed her home. She couldn’t believe he followed her, and she thought about confronting him after she parked her car, but she had no idea what to say to him. She could ask him why he disappeared fifteen years ago, why he never once tried to contact her, but she knew whatever answers he gave wouldn’t be enough.

As soon as she had stepped inside of her house, her little white Bichon Frise, Zeus, yipped at her feet. He stood alert and growled, and she cracked her window blinds enough to see Eric tuck a note into her mailbox and hurry back to his truck parked across the street. She knew he was scared to talk to her.

When he left, she went and got the note. After she read it, she threw it away. A minute later, she dug it out of the trash and pressed it to her heart, unable to hold in her tears.

And here she was the next day, still rereading the note, his phone number now memorized but she couldn’t bring herself to call him. It wouldn’t do anything but dig up memories. Bad memories—too many for one person. Good memories stirred in her too—of sneaking out to the barn in the middle of the summer nights, fresh hay cool against their skin, talking until the sun bled orange onto the surrounding fields.

Sam traced a finger over the white scar on her right hand, her fate line severed by it. She thought of Eric’s left leg, the long scar marring his calf.

She took out her cellphone and entered Eric’s number. Her finger hovered over the button to call him. Her phone vibrated in her hand and she nearly threw it down from the jolt of fear it sent through her chest. She saw who was calling and suppressed a sigh.

“I know. I just want to make sure you know about the storms that are gonna hit tonight.”

Sam held in another sigh. “They’re not coming anywhere near Oklahoma City.”

“But you know how storms can shift and with you living in that tiny house with no storm shelter, I just think it’d be best for you to come on down here where you can be safe.”

Sam gave up and the sigh broke free.

“Mama, I’m not driving out to Blanchard for the possibility of a storm that’s already northeast of here.”

She left out the fact that her mom’s access to a storm shelter was through the assisted living complex where she now lived. Her mom told their extended family in Texas it was a condo, made it sound like a luxurious suite, and Sam never corrected her.

She glanced down at the note in her hand and decided to change gears with her mom. “Eric Walker’s living in the city. He wants to meet up with me.”

Rarely did Sam ever hear her mom cuss unless her lupus was hitting her joints hard, but she caught a whispered, “goddamn fool.”

“You heard me, girl. What on earth does he want?”

Sam had an idea of what he wanted—forgiveness—something she wasn’t sure she could give him.