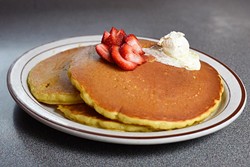 The secret of the pancakes will remain a secret.

Have you ever had a dish so good that you have to ask your server what’s in it?

“How did you cook this chicken?”

“What did they add to the soup?”

The server looks around conspiratorially, leans in close and whispers it in your ear. That’s what happened to me at Sherri’s Diner, 704 SW 59th St., when I lost my mind over a plate of pancakes.

As per the first sentence of this review, I will not be revealing the ingredient(s) that give Sherri’s pancakes such an ethereal texture and flavor that my first guess was ground-up angel wings. Suffice it to say, you should go to Sherri’s and order a stack or two yourself. Revel in those fork-tender flapjacks. Growl menacingly at the other tables if anyone dares eye your golden-brown bounty too greedily.

Pancakes are two for $4.29 or three for $5.29. You can get chocolate chips (or blueberries or pecans) in them for an extra 99 cents, but you don’t need to. They might not even require syrup. Take a bite of those pancakes simply slathered in butter. Yeah. Right?

Man can live by pancakes alone, and anybody who tells you differently is your enemy. But should you be interested in adding some food groups to your predominantly pancake diet, Sherri’s is a good place to be.

Between a pork chop and eggs ($12.99, including potatoes and bread) and chicken-fried steak and eggs ($9.99, same sides), I’ll take the steak. Hand-breaded and fried to a crispy crust, the steak is tender and flavorful. 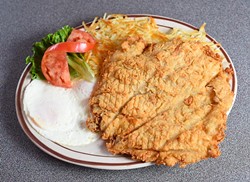 The pork chop was nicely seasoned, but despite being a thick, bone-in chop, it came out kind of dry. Pork is a notoriously difficult meat to cook without overcooking. For the texture and flavor, the chicken-fried steak is the obvious choice.

But what if it’s not breakfast time? Well, now you just sound stupid. It’s always time for breakfast. Still, whatever, I’ll humor you.

If you crave something special, look no further than the homemade chicken and dumplings ($8.99). What an amazing pile of carbohydrates this is. Gorgeous, tender dumplings and shredded chicken are mixed into a creamy sauce that bursts with thickened chicken stock. For some reason, it comes with mashed potatoes and two other sides.

It’s not physically impossible to leave Sherri’s hungry, but it does require some work on your part. 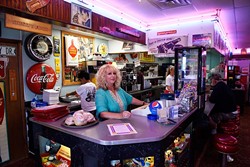 For one thing, you’ll have to refrain from ordering chili (a cup is $3.29; a bowl is $6.29) with cheese and onions. Slow down, quick draw; you might not need to put any hot sauce on there. Sherri’s chili isn’t going to burn your mouth to the ground, but it does have a pleasant heat and a smooth texture.

I might prefer my chili a little chunkier, but I’ll bet this would go dynamite with a handful of Fritos. It comes with cornbread, which is light and airy and deserves to have butter spread on it.

If you go on the third Tuesday of the month, you’ll be peer-pressured into getting the cabbage rolls ($8.99). Unlike getting that regrettable high school haircut or enrolling in that early morning boot camp class, this is the kind of pressure you should give in to. The cabbage rolls are big and hearty with a tender beef filling and mild cabbage under a sweet stewed tomato sauce. Glorious.

The bacon cheeseburger ($6.99) is a good choice if you’re really set on eating a cheeseburger. It’s not mind-blowingly amazing, but it doesn’t need to be, really. Oklahoma City is laden with top-notch burger barns. It’s far less likely to find someplace making delectable homemade pies like you can find at Sherri’s Diner. 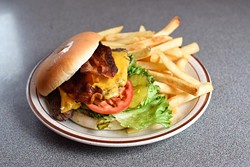 The caramel apple pie ($3.29) is a delight. In fact, given how much you’re likely to eat, you might even do as I did and get the pie before your meal. Chocolate cream, lemon meringue and a rotating cast of others are found in that case at the counter. Study them. Memorize them. Eat them all.

Sherri’s Diner is everything I love about diners. The staff is friendly. The dining room is clean. The food is fresh and tasty and inexpensive. It has been in Oklahoma City for a while, and it’ll take all of one minute for you to see why.

Print headline: Batter up, The secret to pancakes at Sherri's Diner is that you need to try them as soon as possible.

What needs work: Pork chops were a touch dry.

Tip: Some breakfast specialties, like the S.O.S., are only available before 11 a.m.