Since opening in 2016, Panda Grill has generated a huge following thanks to its commitment to providing fresh food in large portions.

It’s all because its founder Ignacio “Nacho” Castro has particular tastes, and it has developed a completely unique burger in a crowded market.

“I’m picky with my food,” Castro admits. “I know by looking, and if it’s been reheated, I won’t eat it. If people are going to pay a good price, we’re going to give them good quality.”

There is not a freezer or microwave on the premises at 1700 S. Morgan Road in western Oklahoma City, just south of Yukon city limits. Castro grew up watching his mother Norma making her own burger patties, and that tradition continues at Panda Grill, where 8-ounce (half-pound) patties are standard.

“I love to eat burgers when we go out to eat, but you’d get little burgers and I’d ask, ‘Why is this burger so small?’” Castro said. “You’d get a little, bitty amount of fries in the basket. I told my brothers I was going to open a restaurant; we’re going to have big burgers and everything is going to be cooked to-order.”

Every morning, staff cuts fries and washes potatoes and fries are dropped in the fryer at the same time as the burgers that are added to the grill only after an order ticket comes in. Like the size of meals (a double cheeseburger weighs in at over a pound of meat and features four slices of cheese and six strips of bacon), Castro is particular on how Panda Grill prepares its onion burger, which is an Oklahoma staple.

“A lot of places put the onions on the grill and [immediately] put the burger on top,” he said. “They’re not cooked all the way. We caramelize our onions and then put them on the burger.”

Castro opened Panda Grill after a year and a half of looking for a new job. He and his wife sold their nail salon and put everything into the restaurant, despite not having experience in the industry.

“I didn’t even know how to turn on the grills when we got here and had to call my friend’s dad to help get set up,” he remembered.

All in a name 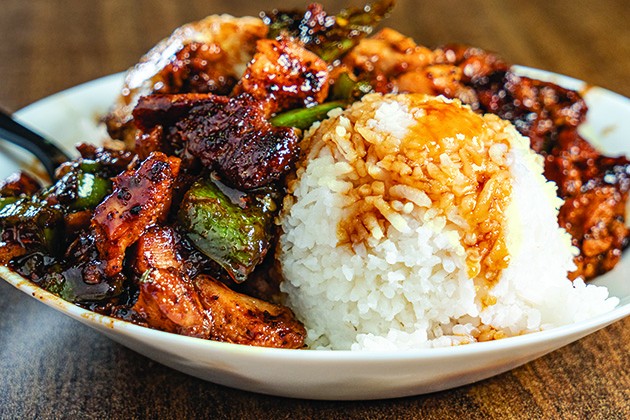 He originally thought about naming the restaurant after himself, something like Nacho’s Grill, but didn’t want people to think it offered chips and salsa. He opted for Panda Grill in honor of a trip he took to China in 2005 that included seeing pandas in person. Artist Angel Sanchez painted a mural of a panda holding a giant burger in the restaurant.

“I love pandas, and my kids are Vietnamese and Mexican, so the other side of the family calls me ‘Panda,’ and that’s where the name stuck,” Castro said.  “I’m a pretty big guy, so Panda it is.”

Like the name implies, Panda Grill originally had a larger menu of Chinese-inspired dishes like lo mein. There were only four basic burgers, but Castro quickly noticed that the burgers became a top-seller in addition to one other item: chicken teriyaki. It remains on the menu along with a spicier version with jalapeños.

“We have customers to this day that have never tried a burger because they always get chicken,” he said. “It’s a pound of chicken, and you go to other Asian restaurants and it might be a quarter of a pound [of chicken] and stuffed with vegetables. I don’t want people to pay for vegetables. I’m going to give them meat; that’s what they want.”

The El Gran Bubba Special ($19.99) features a single bacon cheeseburger with fries and a full serving of chicken teriyaki all on one plate.

When Castro first opened Panda Grill, he used a standard hamburger bun, but he began to hear feedback that it would become too soggy during to-go orders during a trip down the street, let alone for some customers coming from Norman and Lawton.

He searched local bakeries and found Daniel Vasquez, owner of Oaxaca Bakery at 1117 SW 59th St., with whom Castro worked to create special bread that is found only at Panda Grill and its food truck. Castro calls it Panda Bread, but it’s a hybrid between traditional soft hamburger bun and telera bread used for tortas.

Vasquez said it took a few weeks to get the final product just right. He makes at least 20 dozen buns per week (sometimes much more) for Panda Grill.

“I had to experiment, and we didn’t want a [soft] hamburger bun, and I didn’t want it too hard,” Vasquez said. “I’m impressed with [Castro]. A lot of people try to make something different, and they can’t do it. … It’s worked out very well for him.”

The Panda Bread is substantial enough to hold up to to-go orders as well as huge amounts of toppings. The Juarez-Style Burger ($13.59) honors his parents’ home state in Mexico with a 4-ounce all-beef hot dog split and griddled, ham, jalapeños, avocado, lettuce, tomato and pickle.

The Panda Burger ($13.75) is grilled onions, mushrooms and jalapeños with bacon and cheese topped with a signature Panda Sauce. While many burgers use a house sauce that is often a take on Thousand Island dressing, Castro opts for his take on tzatziki with cucumber and yogurt.

With its extra-large portions, Panda Grill is home to the Baby Max Burger challenge ($59.99), which requires 24 hours’ notice to have a special extra large bun made at Oaxaca Bakery. It’s six patties, six hot dogs, 24 pieces of bacon, six slices of ham, two avocados and vegetables with a large basket of fries. If anyone completes the challenge in 30 minutes, it’s free and they get a T-shirt, but no one has been able to finish it yet.

“It feeds a family of six or seven, and they still get to-go boxes,” Castro said of the burger named after his son.

Panda Grill does offer vegetarian options like tofu stir-fry and vegetarian tacos with squash, but they aren’t listed on the official menu. It often runs taco specials on Tuesday.

“It doesn’t feel like work even though I’m always here,” Marco Castro said. “We want to make it as welcoming as possible and make it feel like family.”