The rebirth of Manuel Perez Park has officially begun.

Last week, city leaders hosted a groundbreaking ceremony for the 27-acre park, which will span several blocks east from S. Robinson Avenue along the Oklahoma River.

“The community has been behind this to get this recognition but also to work with the city to get funding, to get the design, to get community input about what the park would be,” Donna Cervantes, associate planner for Oklahoma City, told Oklahoma Gazette. “It brought together so many dreams about what can be for rebuilding and honoring the good and then showing who’s here in the community, what’s been here for decades and showing the growth that’s to come.”

The original Manuel Perez Park was north of where the new one will be and was only about an eighth of an acre. Doug Kupper, Parks & Recreation director, said the groundbreaking has been a long time coming.

“We all know what Manuel Perez Park looked like,” Kupper said during the ceremony. “I have to admit that wasn’t very inspiring except for the plaque and the expression of who Manuel Perez was and what he meant to the United States of America, let alone Oklahoma City.” 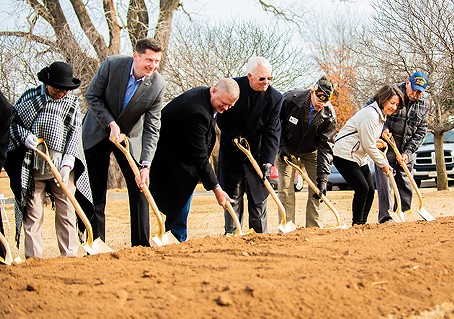 Manuel Perez Jr. was an Oklahoma City-born World War II veteran who was killed in action when he was only 22. He served as private first class and was posthumously awarded a Medal of Honor for his service in the Philippines. It is the highest and most prestigious award for serving in the armed services. Only 3,508 people have received the honor.

“Through his courageous determination and heroic disregard of grave danger, Pfc. Perez made possible the successful advance of his unit toward a valuable objective and provided a lasting inspiration for his comrades,” according to Congressional Medal of Honor Society.

To commemorate him, the city named a park in his honor and created a plaque with his accomplishments. But in 2012, the plaque was stolen. After that, community activists, as Friends of Manuel Perez, began a fundraising campaign to erect a new monument and potentially fund much-needed park renovations.

“The voices were heard. We’re going
to see a big change here that will
spark more change.”
—Donna Cervantes tweet this

However, at the time, the future of the park was uncertain. Situated at SW 14th Street and Harvey Avenue, the park bordered what is set to become the lower part of Scissortail Park, so officials were considering whether to incorporate the two. Conversations between Friends of Manuel Perez and several city leaders about the best path forward led to the idea of moving the park and having it incorporate a western portion of Wiley Post Park.

“That’s how we ended up creating this new opportunity to recognize and honor Medal of Honor Recipient Manuel Perez. I can’t say enough for the Friends of Manuel Perez. They worked tirelessly with park staff and council folks and the mayor’s office, and we sat through a lot of renditions that our design consultants put together,” Kupper said. “It took us a little bit of time to get it bidded out, but we are so happy that McNabb Construction were the ones that saw the light and gave us a good bid for constructing the park. … I get emotional at these things, especially when we’re recognizing such a distinguished career in the military. It’s hard to think about people giving up their lives to keep our way of life going forward.”

Cruz Cardenas, Perez’s cousin and a veteran himself, was at the groundbreaking ceremony. He told Gazette that unless people knew what the former park looked like, it would be difficult to truly appreciate how much of an improvement the new park will be. He said it meant a lot to be able to be part of the groundbreaking.

Last November, when the city started taking bids for the new park, it was estimated the park could open by late 2019, but the bidding process took longer than anticipated. Cervantes, who formerly served as executive director of Calle Dos Cinco in Historic Capitol Hill, previously told Gazette that some in the community were doubtful the city would honor its commitments.

“The city has been faithful,” she told Gazette after the groundbreaking. “I think they had to go out to bid three times. Instead of coming back and saying, ‘Well, what you wanted, we can’t afford,’ they really pressed forward and went out for more bids and tried to find the right contractor who could do the work at the price we needed. So it took longer, but it’s worth the wait. We’re thrilled with the design, the inclusion that’s being done. The voices were heard. We’re going to see a big change here that will spark more change.”

The park’s memorial, which will be in its cul-de-sac and designed like a Medal of Honor, will also honor other recipients from Oklahoma.

An Oklahoma flag, an American flag and a Medal of Honor flag will stand over the memorial’s wall where Perez’s plaque will hang next to the words “We Remember.” A pavilion area, event plaza and playground area will be added adjacent to memorial, along with covered seating areas.

Manuel Perez Park will incorporate and add features for skateboards onto Mat Hoffman Action Sports Park. A basketball court and two futsal courts will be added near the skate park as well.

“It’s just an awesome time to be a part of positive change, to have been part of it when you felt like nothing’s happening or so little baby steps,” Cervantes said. “It’s like planting seeds and then seeing a tree grow. It’s now starting to blossom, so it’s wonderful.”

Mayor David Holt also said during the ceremony that this kind of investment can create a “new renaissance in the Capitol Hill area.”

“I really envision, maybe 20 years from now, that we’ll have really an unbroken central business district from Midtown all the way to Capitol Hill, and over half of that’s in south Oklahoma City,” he said. “People will think differently about what our central business district is and what its boundaries are. … You will continue to see south Oklahoma City and the growing Latino community that’s now really headquartered in Capitol Hill continue to thrive and grow in our city. And again, projects like this are fundamental building blocks in that, so I’m excited about this project on that level.”

Construction is estimated to be complete in fall 2020.