With an opening date set for later this year, the upper park of Scissortail Park is getting its finishing touches. 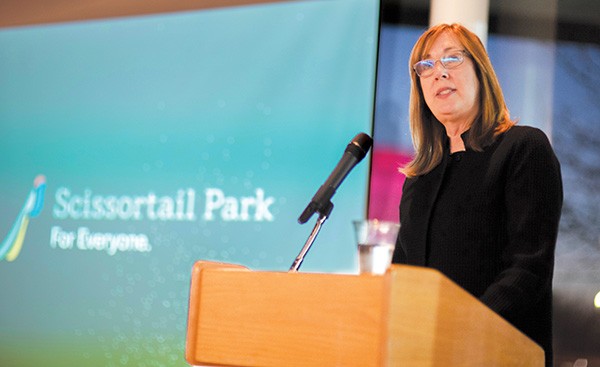 MAPS 3-funded Scissortail Park is nearing completion, with the upper park set to open with a four-day celebration in late September if construction goes smoothly. The lower park will not open until late next year or 2022.

Maureen Heffernan, Scissortail Park Foundation director, gave an update on the park at the end of January. Scissortail Park is composed of a 40-acre upper park and a 30-acre lower park connected by the Skydance Bridge over Interstate 40. It will be the largest park in the city once fully completed.

The corner at Oklahoma City Boulevard and Robinson Avenue is the “billion-dollar corner,” Heffernan said. Omni Oklahoma City Hotel, the MAPS 3 convention center, Chesapeake Energy Arena and a streetcar stop will surround the corner. There will also be an art piece in that corner of the park.

“There is 1 percent for art in the budget for the park, and we’re working with a young couple in Brooklyn, New York, to make this really large-scale piece that’s called ‘Taking Flight,’” she said. “It’s a huge, round orb, and it looks like it’s about to be propelled into space. It just shows the momentum and the energy taking flight in what the city is doing and has been doing now for a while and will continue to do. … You’ll see the size of this is actually one of the tallest features in the park.”

The park’s cafe will be located along the new Oklahoma City Boulevard and have outdoor and indoor seating. Heffernan said they are working to expand the cafe so it can be open year-round once completed. The Social Order Dining Collective, which manages local restaurants like Fuzzy’s Taco Shop and The Jones Assembly, will operate the park’s cafe.

The Social Order Dining Collective representatives unveiled the name and logo for the park cafe during the update.

“We wanted to pick a name that had that nostalgia feel and mix the familiar with the modern, so we’d like to introduce ‘Spark,’” said Courtney Mankin, president of The Social Order. “We decided on that name because we felt like it had multiple meanings. It evokes energy, it can mean a connection between two people or things and it ignites excitement. Just like Scissortail Park is a park for everyone, we wanted to make sure we came up with a brand, a menu and a restaurant for everyone.”

The cafe will feature a menu built around burgers and milkshakes but will also offer healthy options. The logo incorporates the architecture of the building.

An area along Hudson Avenue will be home to lens gardens. Heffernan said one of the gardens is dedicated to mayor David Holt’s family.

“They’re these circular mounted gardens, some you can go into, some you just walk around and it adds some height and vertical interest in that part,” Heffernan said. “Just last year, mayor Holt actually made a donation to the foundation with which we started the endowment. One of the gardens is dedicated to his parents, so that’s going to be really beautiful when these all get planted.”

The two major features of the upper park are the great lawn and the lake. More than a third of the 900 trees have already been planted on the lawn, which will hold about 15,000 people. Heffernan said the lawn was designed for performances and events of all scopes, including major concerts.

“We can have small events, medium events — medium meaning up to 10,000 people. That’s how big it is,” Heffernan said. “If the arts festival or some other major festival wants to move here, they’ve thought about that and have built in some things there so it wouldn’t take too many extra things to make something like that happen.”

The amphitheater stage will have a green room and be equipped with audio/visual equipment, which will allow organizers to bring in various types of bands at a lower cost. Heffernan said they want many music events to be free but some will require the purchase of a ticket.

“We plan to do really quality programming there, and not just music, but we can do dance and theater,” she said. “We can bring in local people to use it — high school bands, local talent. It’s really the community’s stage that we see for the city.”

The lake will be filled by the end of the month, with a 240-foot pedestrian bridge looming above. There will be paddleboards, canoes and kayaks for rental. A biofiltration system will help keep the water clean.

“This bridge will take you toward the boathouse, so just crossing it is kind of an adventure,” Heffernan said. “The boathouse here is just gorgeous. There’s a covered porch, and you’re looking south to Union Station through all the landscaping. The Social Order is also going to run that, so you can get a glass of wine here or you can get something to eat as well.”

The promenade along the Robinson Avenue side of the park will be a curved pathway lined with trees and lights on both sides. It will be almost 20 feet wide. A block-long interactive fountain will be sandwiched between the curved promenade and the street.

“It will be absolutely beautiful in the evening to walk and enjoy, especially in the summer when it’s cooler in the evening. I think people will just enjoy promenading down the promenade,” Heffernan said. “About halfway through Robinson, there’s a fountain area. This whole fountain feature is actually the most expensive part of the upper park. ... Metal poles will come up from the ground, and water shoots out. It kind of looks like a field of grass swinging in the wind. Children are going to love to run around in that.”

The area was designed so food trucks could line up along Robinson Avenue and people can eat under various shade structures just north of the fountain.

“Those are some of the main features of the upper park, and again, all of these areas will be very lush with lots of trees, lots of perennials, grasses — it will very much feel like a garden park,” Heffernan said.

Union Station stands at the end of the upper park and is set to be renovated. Heffernan hopes to use that building as an event space once it is renovated.

The lower park will not open until late-2021 or 2022. It will be home to basketball, futsal and pickleball courts as well as soccer fields. Heffernan said it will be more quiet and naturalistic, like a nature preserve.