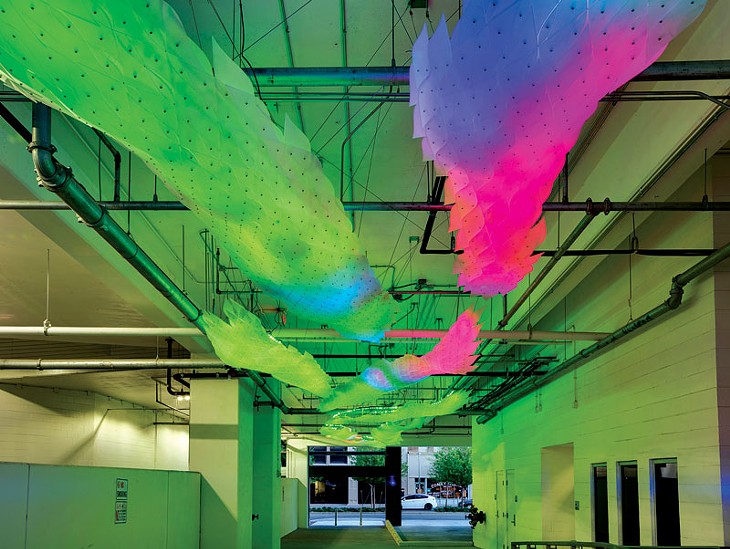 People call some artwork eye-catching. Those passing by a new installation inside a downtown parking garage park themselves in front of it. It practically demands attention.

The Arts District Parking Garage, 431 W. Main St., is now home to “Small Talk About the Weather,” a colorful, cloud-mimicking overhead piece that interacts with pedestrians and its surroundings.

LED lights illuminate nine long bands wisping along the garage corridor. The lights are meant to pick up on the colors and patterns worn by those who walk by. When not responding to those around it, the piece displays historic Doppler radar patterns. A small ledge for a smartphone also gives visitors the option of streaming a video and having those colors translated onto the clouds above.

Artist Joe O’Connell helped conceptualize the piece for Central Oklahoma Transportation and Parking Authority (COTPA) with teammates at design firm Creative Machines. The group was chosen from an open call to artists from the Oklahoma City Arts Commission in part because their weather-inspired concept was unique to the community.

While exploring the city and developing the concept the group would later pitch, O’Connell, who lives in Tucson, Arizona, said he noticed weather-related talk was a common greeting around the state. He soon picked up on the fact that small talk about the sky or the temperature was a very Oklahoma thing.

Creative Machines got its start working on museum exhibits but didn’t limit its mission to that focus alone. Over time, it has taken on an increasing number of public art projects, though the request from COTPA was unique.

“It was intriguing to get a call from a parking garage, which is not a place you would normally associate with art, but I kind of like those unusual juxtapositions,” O’Connell said.

Robbie Kienzle, arts and cultural affairs liaison for Oklahoma City, now walks by the installation regularly on the way to her car after work. Its presence makes a difference in her day.

“Having a piece like this downtown that’s on the way as I walk out to my car makes it seem really safe,” she said.

Kienzle isn’t the only one excited about “Small Talk.” She said she has gotten emails from people who say they go out of their way on the way to their car to see the installation. One person she talked to said they got home late because they spent 30 minutes after work playing around with the piece.

Kienzle said she has already had conversations with the parking lot manager about future art opportunities.

“Small Talk” is as much an engineering feat as it is an art installation. Kienzle said a handful of artists or firms do big digital works like this. It’s a new trend she expects to see expanded in the future.

“Those artists who are recently graduating who grew up as digital natives, I think we’re going to start seeing a lot more of this interactive kind of artwork,” she said.

O’Connell said he mostly hopes his work will be a popular attraction and an excuse for strangers to talk to each other.

“If I had to say one goal, I would hope people come to the parking garage from time to time not because they’re parked there, but just to visit,” he said. “I hope it becomes a little bit of a destination.”