“Because I’m a curious person and an educator,” Allswede said, “the goal for Project Box was always to have a venue that offered the opportunity to expose my audience to different materials, mediums or ideas through the arts.” 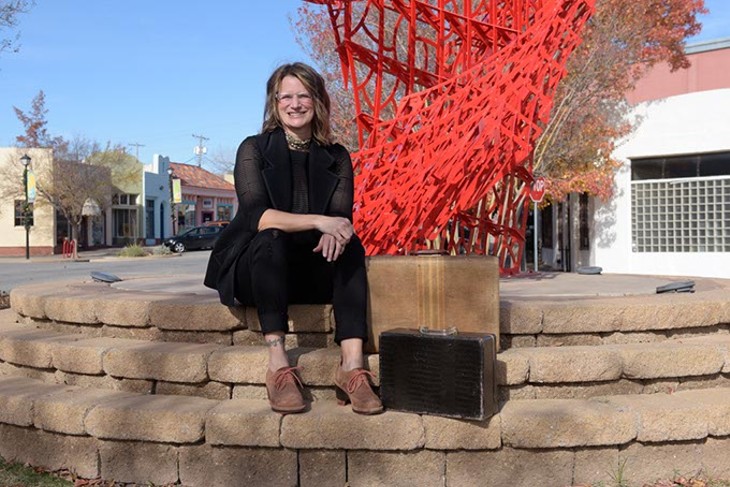 Many of those who visited Paseo Arts District last month during its monthly First Friday Gallery Walk were likely surprised to find The Project Box missing from the brightly colored stretch of venues, studios and storefronts.

Owner Lisa Jean Allswede officially closed the gallery Oct. 29 after she announced she was moving to Las Vegas, where her husband Michael secured a job.

In its nearly three years, The Project Box noticeably impacted the district with its unique showcases featuring the state’s rising talents. Allswede, a Michigan native, has been an arts advocate her entire life and spent much of her Oklahoma City tenure promoting the work of others.

“Because I’m a curious person and an educator,” Allswede said, “the goal for Project Box was always to have a venue that offered the opportunity to expose my audience to different materials, mediums or ideas through the arts.”

Allswede spent time in various art communities around the country before moving here in 2011. She also joined Oklahoma Visual Arts Coalition (OVAC) and Oklahoma Arts Council programs and immersed herself in the arts community.

She earned her art degree from the University of Michigan and spent some time in Pittsburgh to be with her husband and stepson.

Stitchings make up a lot of Allswede’s work, but she has also painted landscapes inspired by trips Ireland, France and Japan. In her early career, she also worked as a faux finisher.

While in Pittsburgh, Allswede taught art at a private school. She said her experiences there influenced how she worked with artists at The Project Box.

After opening The Project Box in 2014, exhibits there also tackled complex or serious issues. An early show invited guests to draw on papered walls what freedom meant to them, and February’s Women in War Zones showcased Ebony Iman Dallas and revealed how women from different cultures handled adversity.

“That idea of working together in the community to have a conversation about a really tough topic was really intriguing,” Allswede said. “I wanted it to be my studio space, but I also saw it as a partnership,” she said. “I didn’t want to represent [resident artists] as a gallery.”

One of the last exhibits featured at The Project Box was Michael Litzau’s Packer Land, a unique concept featuring Oklahoma and Japanese landscapes cross-stitched in the green-and-gold color scheme of the Wisconsin native’s beloved Green Bay Packers.

Allswede said the show drew in some interested football fans — a group not typically associated with gallery viewing — illustrating a core conviction: Art appreciators are not a closed community.

“It’s the experience the person has — it’s their lens — that determines what they get out of it,” she said.

Allswede called it a labor of love.

She said she has no plans for a Las Vegas brick-and-mortar studio space at this time, though she is interested in keeping the Project Box concept alive in some other capacity. Artist Dustin Oswald and Bombs Away Art relocated into Allswede’s former Paseo Arts District space. Native American gallery The Corridor, Gallery of Fine Art filled the remaining vacancy.

Allswede is excited to make new connections in Las Vegas and once again help support a rising arts scene.

“I feel like I kind of have a knack for finding those places,” she said. “I’m not seeking it personally, but it feels like that.”

Print Headline: Boxing up; Paseo artist Lisa Jean Allswede moves on to her next adventure, this one in Las Vegas.