A little over 40 years ago, Paseo Arts Festival began as a small street festival that reflected the area’s bohemian vibe. Today, the Paseo Arts District is a bustling arts, shopping and dining destination known for its galleries, studios and tight-knight community; something reflected in the increasing professionalism of the annual event.

A Memorial Day tradition, the festival draws around 60,000 visitors to the area each year. This year’s event happens May 27-29 throughout the historic district, which runs from NW 28th Street and Walker Avenue to NW 30th Street and Dewey Avenue.

“Just by word of mouth and lots of hard work as far as our committee and our director are concerned, we’ve grown in professionalism,” said Paseo Arts Festival director Collin Rosebrook. “It’s not just a flea market or someone who is handy at crafts, but these are professional artists who make their living at it.”

This year, more than 200 people applied for 80 coveted artist slots. Several more are on an extensive waiting list and ready to step in should a spot open up. The organization uses a juried system in which artists judge art in their own medium — photographers judging photography and sculptors judging sculpture, for example. This year’s event showcases nearly every medium, including photography, sculpture, painting, jewelry and ceramics.

While the increasingly professional nature of the festival attracts a growing number of artists, visitors are still drawn to the event’s casual, creative vibe that comes with being located in a creative community that’s filled with working artists.

“I hear people constantly saying this is their favorite arts festival because it’s so relaxed and so laid-back,” Rosebrook said, “and it’s a real artsy atmosphere, the surrounding area with the ambiance of the galleries.”

The festival not only raises awareness about local art. It also generates funds for the district’s many programs and events throughout the year by selling festival T-shirts and posters, designed this year by fine artist and graphic designer Brian Landreth. Some of these events include juried art shows, which attract creatives from all over Oklahoma, said Amanda Bleakley, Paseo Arts Association executive director. 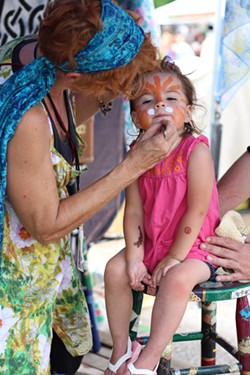 The area’s galleries and stores will be open during the festival, and Bleakley said festival organizers encourage visitors to check out other district attractions.

“This is about bringing people down to our community to show them what we have to offer,” Bleakley said.

Paseo Arts Festival plays a “tremendous role” in supporting the district and raising awareness of local art, Bleakley said, and it attracts people who might not otherwise check out the area.

Rosebrook said several artists have displayed at the festival for more than 20 years, and they return each year for the customer base, with some patrons coming out to see specific artists. It also attracts new vendors every year.

Budding artists can hone their creative skills at the free children’s tent, a popular attraction that features spin art and other crafts.

Over a dozen food vendors will serve up everything from funnel cakes to Asian fare, Caribbean cuisine, corn dogs, kettle corn, french fries, nachos, gyros, sausage sandwiches, chicken salad on croissant, shaved ice, ice cream and mini doughnuts. To wash it all down, guests can order from The Lemonade Company or from Urban WineWorks and Whispering Meadows Vineyards & Winery. Roughtail Brewing Co. returns with its craft beer offerings, as well.